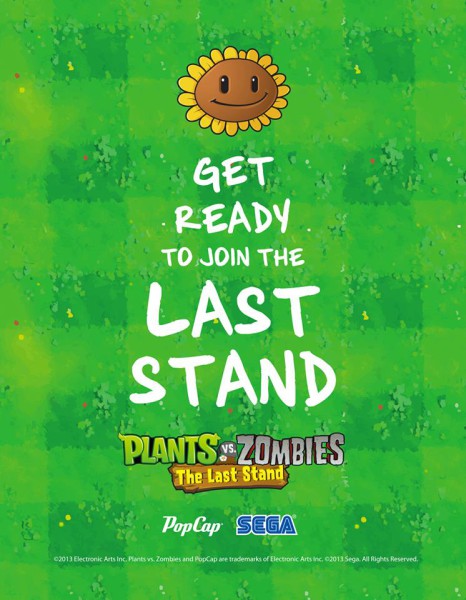 Sadly not much is known besides the image above. We do know this is an arcade game and the name could refer to the mini-game from the series called ‘Last Stand‘.

Arcade Heroes says that this will be IAAPA 2013, along with Transformers: Human Revolution.

This isn’t the first Plants vs Zombies related post on SEGAbits, did you guys miss the first game running on the SEGA Genesis?

This weekend at the PAX Australia event, fans of the game ‘Plants vs. Zombies‘ got to see a weird version of their favorite PopCap tower defense game. The game running on the SEGA Genesis/Mega Drive.

Penny Arcade got a chance to play the game and posted the above video of it in action. Dave Cudrev from Retrospekt said he bought the game from the creator, who is a Russian coder. His hobby was rebuilding games and selling them on Ebay.

He purchased the game for $30 dollars, with no box or manual. Other games the coder has re-worked include Darkwing Duck and Chip ‘n Dale: Rescue Rangers for the Genesis/Mega Drive. I have to be honest, this would be a cool conversational piece of software to have.