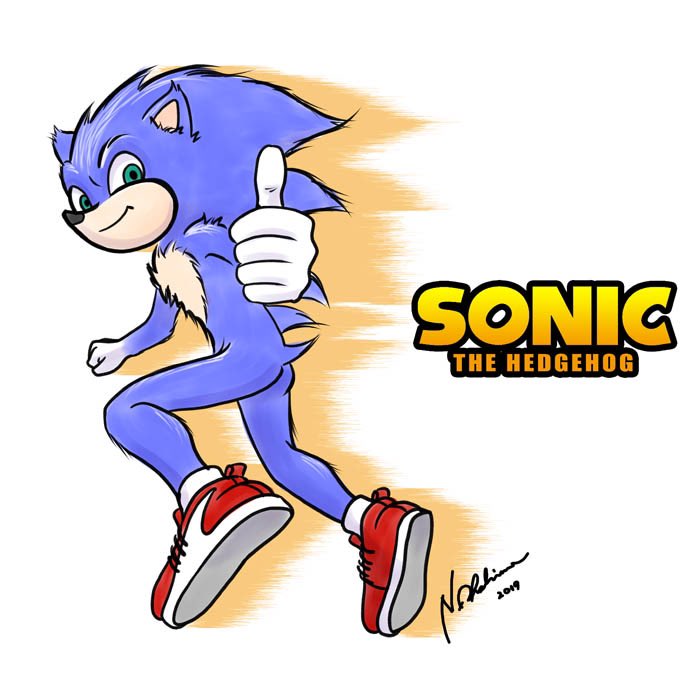 While it seems most feedback for the newly revealed Sonic the Hedgehog movie has been negative, which is obvious why, its always nice to go and see what the original creators of the blue blur think. Thanks to the power of the internet, they are allowed to share their thoughts and feelings with us. The first one up is original Sonic the Hedgehog character designer Naoto Oshima who drew the new Paramount Sonic the Hedgehog (pictured above) and said:

“So far, various Sonics have appeared. I loved all Sonics. I saw a trailer of Sonic’s movie. I was expecting adults to have fun too. I am worried. Since everyone loves Sonic, various opinions come out. I want to thank everyone. It is my ideal to be sonic everyone loves.” – Naoto Oshima via Twitter

Can I say that even Naoto Oshima’s art for the badly designed Paramount Sonic the Hedgehog looks way better than the promotional art they put out? The man still has it.

On the other hand Yuji Naka, lead programmer and designer for the original games said at first:

I just want to add that all translations come from @SonicJPNews, which is a great Twitter account that translates Japanese Sonic tweets, so go follow them!

“It seems like the trailer for Sonic ver. Hollywood was released on the last day of Heisei. I watched it on the first day of Reiwa. The part he is moving looks fine. What will we think after watching the whole movie? I’m starting to look forward to it.” – Yuji Naka on Twitter (via SonicJPNews)

The next day Yuji Naka had more to add about the trailer’s visuals:

“So there was an official Twitter of Hollywood Sonic. This key visual does feel odd.” – Yuji Naka on Twitter (via SonicJPNews) 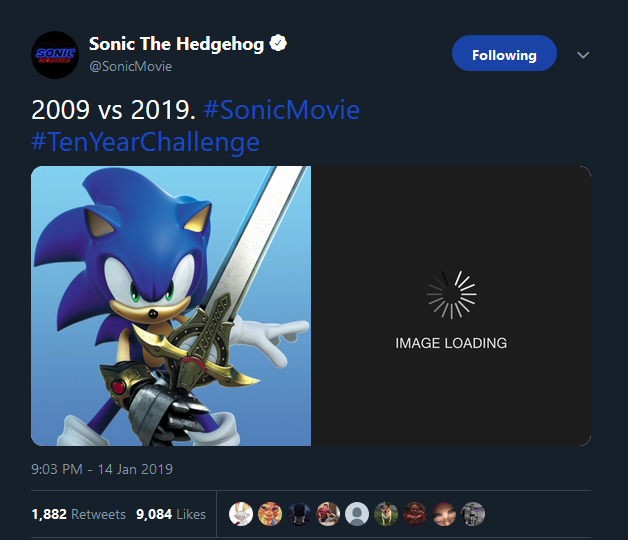 Yuji Naka didn’t stop there, he later went on to comment on a meme created by the Sonic the Hedgehog movie twitter account that was trying to do the ‘Ten Year Challenge” showing a picture of Sonic from 2009 and then says vs. 2019 (image loading):

“They are comparing wrong era. This Sonic was made after I left SEGA so it feels odd enough for me to see him with a sword. If they were going to compare, I wanted to see ‘Compared to 1991, Hollywood Sonic has become this much cooler’.” – Yuji Naka on Twitter (via SonicJPNews)

He then went on to praise Jim Carrey as Dr. Robotnik, but of course calling him Eggman. I wonder if someone told him…

Mr. Naka then went on to say that Sonic the Hedgehog model looks a lot better in motion:

“I’m starting to get used to it by watching it a few times over. When he is not moving it still feels very odd, but Sonic doesn’t like to stay still so it’s better when he’s moving. Eggman looks good. I’m looking forward to it.” – Yuji Naka on Twitter (via SonicJPNews)

Then things changed for  Yuji Naka where he went on to blame himself for the poor visual effects because MARZA, the team within SEGA that he helped fund, is doing the CGI for the film:

“I remembered something while seeing the unfavorable reception of Hollywood design-Sonic. It seems like MARZA is the one making the CG of the movie, but I am the one who made SEGA’s Visual Entertainment, the predecessor department of it. So I feel like I have some responsibility in this too and I’m starting to feel sorry about it.” – Yuji Naka on Twitter (via SonicJPNews)

Then Yuji Naka revealed that he was invited to do a guest cameo in the movie, but forgot to follow up on it:

“By the way, I asked to take part in the movie as an extra, but it seems like it was forgotten. It was long ago so I forgot about it too. I wanted to be in a Hollywood film if I had the chance.” – Yuji Naka on Twitter (via SonicJPNews)

Later we will get the announcement that Paramount Studios would redesign Sonic after fans got upset. Of course Yuji Naka thanks fans for putting pressure  on the change that will work for everyone.

We also got feedback by Hirokazu Yasuhara on Twitter:

Then after Paramount announced that Sonic will be redesigned:

Congrats to All Sonic fans. Your loves and efforts made it happen. 🥳 And I thank to all staffs of Paramount & Sega for making the Big decision and your continuous hard works, 🙏❤️ https://t.co/o3sL7GY0IR

I want to end this with the feedback by Masato Nishimura (@Mazin_ on twitter) who worked on games like Sonic CD, US Shenmue, Shenmue II, and VF5: Final Showdown

“Even if I’m not comfortable with Hollywood Sonic now, I have a feeling that it will appear as a playable character in another Sonic Mania-like anniversary game 20 years later or so *lol*. If the time comes, I will say this: ‘Hollywood Sonic is forgiven!!’ “ – Masato Nishimura on Twitter (via SonicJPNews)