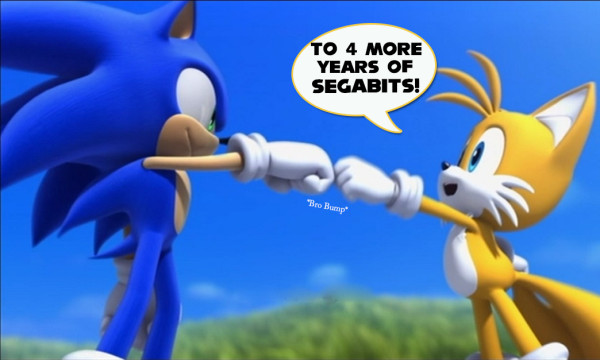 Holy Sonic balls, we are now 4 years old. I know that if you have been scrolling through the site lately you probably have noticed that there has been quite a lack of ‘George’ written posts and I’m here to inform you that I have not abandoned the site. If anything, I missed it. It’s just something I have been doing since I first got internet on my Dreamcast back in 1999! It started off with chats on IRC rooms, moved over to forums and eventually ended up blogging! This lead me to wanting to own my own SEGA site, thus here we are at SEGAbits.

Thankfully I have had great people on board here to help me come up with ideas, this site might have been started by me, but decisions are group based. I want to thank the awesome staff we have here, who work very hard on the site and usually have some of the most brilliant ideas. One of the big reasons the site looks so well is because of our web designer Will, who is working on a new look for the site and has been with the site since before it was even launched! I want to thank A.J. for single handily making our YouTube channel relevant, thanks to Nuckles and Shigs for going to events for us and running the Sonic Talk podcast, thanks to Ben for all that work he does behind the scenes with his editing skills and I also want to thank Barry The Nomad who came in and created some great images for the site, while also helping me make the Swingin’ Report Show podcast awesome. One of the biggest help we had on the site last year was our partnership with Sonic Retro/SEGA Retro, so I definitely want to thank those guys. Its been a great partnership!

But mostly I want to thank everyone that reads the site! You guys make our little fun hobby way more enjoyable. What’s 4 more years?

Today We Celebrate Our 2 Year Anniversary

8 responses to “We are celebrating our 4th anniversary!”