SEGA have revealed their multiplayer modes and classes that will be in Binary Domain. Starting off with the classes, we have what you expect from slow moving characters like the heavy gunner to the sniper class like Recon.

It seems that the max players allowed to play at once in Binary Domain is 10. That seems rather low. SEGA is set to bring all those modes we expect in these type of games. Like Capture the Flag (renamed Data Capture) and team death match. For those that like to play together, SEGA has also confirmed the existence of Invasion. Which is basically like Horde Mode from Gears of War. 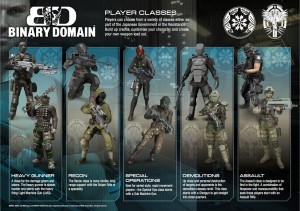 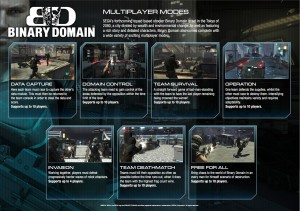