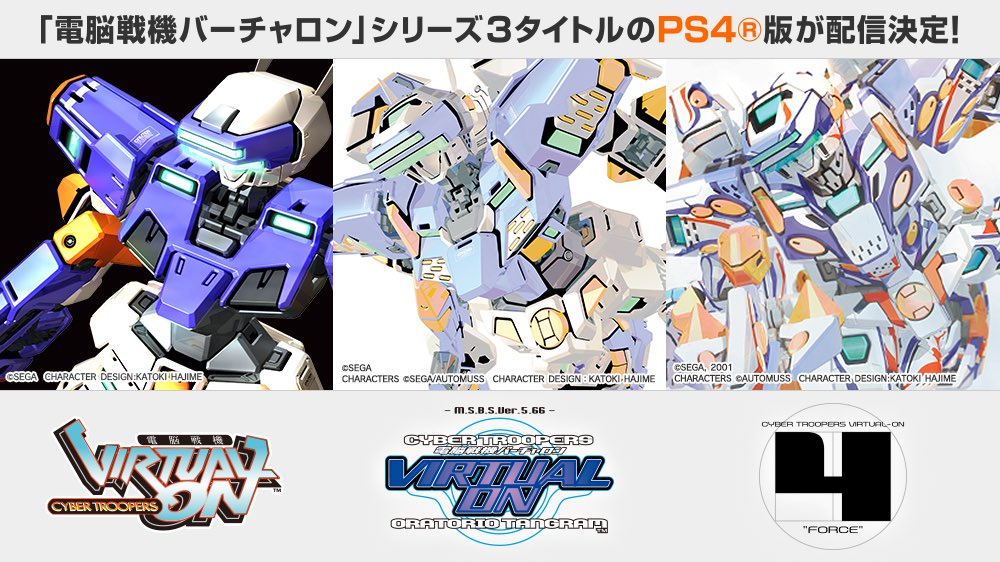 After receiving the strange crossover A Certain Magical Virtual-On, SEGA is going back to the basics for their Virtual-On series. Recently announced is that the first three games in the series, respectively Cyper Troopers Virtual-On, Cyber Troopers Virtual-On Oratorio Tangram, and Cyber Troopers Virtual-On Force, will all be coming to the Playstation 4 in the future. These games will be based on their respective arcade versions, along with the most recent version “Ver. 5.66” in the case of Virtual-On Oratorio Tangram. It’s currently unknown if there will be any additional features available, along with other details such as a pricing or release date. Also the omission of Virtual-On MARZ is strange, but they likely wanted to stick with the games that were made for the arcades.

Virtual-On is an arena robot fighting game that originally used twin sticks to jump, dash, and shoot. Naturally for those that want an authentic experience, this may cause some concern. Luckily, a third party manufacturer under the name TANITA is going to produce a brand new twin stick controller that was originally planned for A Certain Magical Virtual-On. It was originally funded using a Campfire campaign under the name “Twin Stick Project Z”, which as of this writing has surpassed it’s intended goal of 44,600,000円. Currently there’s no word on when this controller will enter full production.

It’s not known if any of these games or the controller will receive a release outside of Japan as of this writing, but keep in touch for any future updates.