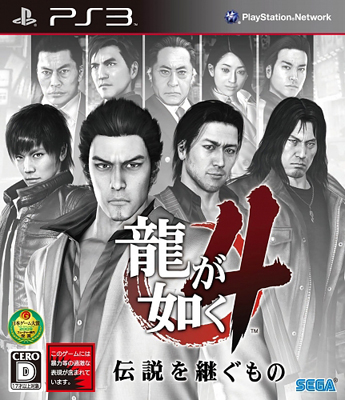 Well SEGA can take comfort in knowing that Yakuza 4 now holds the record for the biggest launch sales of a Yakuza game ever, boosting an impressive 384,000 for week one, helping it to take the crown as number one seller in Japan as well as outselling the combined total of the other big sellers in the top ten. But how does that stack up with previous releases?

So 12,000 units sold more than Yakuza 3, exceeding the lifetime sales of Yakuza 1 and having the biggest debut week in the series is no doubt something SEGA would see as a good thing. Although it still remains to be seen, Yakuza 3 was extremely front loaded and didn’t manage to beat the second Yakuza’s sales (Which is closer to 750,000 when you include the repacked THE BEST editions) so it’s still some way from becoming the most successful Yakuza title.

Although with the increased userbase from the release of Yakuza 3 to now, especially thanks to Final Fantasy XIII, Yakuza 4 at least has a much larger userbase, so I’d predict that it may very well end up outselling Yakuza 3 (Incidentally, has been around the 35 – 50 positions in the Japanese chart since the re-release, clocking up above 50,000 more units)

Although it’ll be interesting if Yakuza 4 can maintain the number one spot in Japan next week, as Koei’s Fist of the North Star title releases next week, whatever the case, for now SEGA can glance to another impressive debut week for one of their most successful series in Japan.