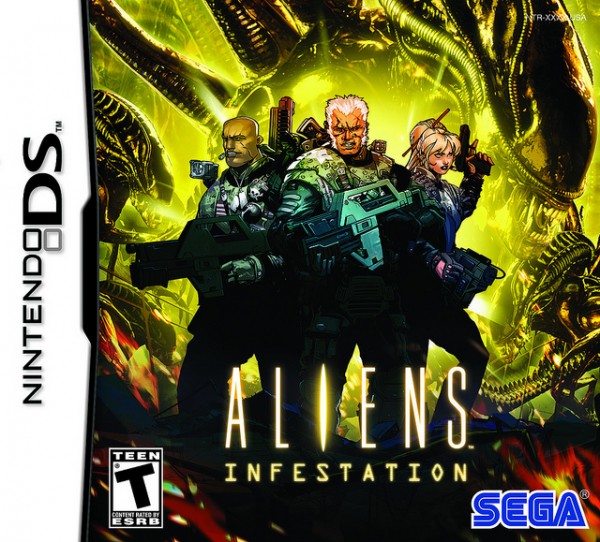 Update: SEGA of America has today made it official following the game’s ESRB leak; Aliens: Infestation will be arriving on the DS this October.

Hit the break for the SEGA’s official summary and the first screenshots. 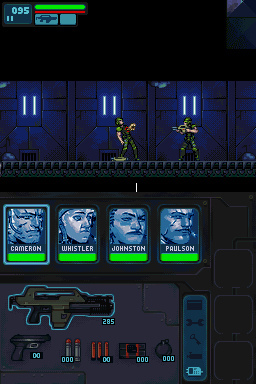 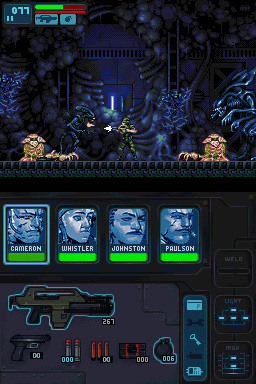 GAME OVER MAN, GAME OVER!

Immerse yourself in the Aliens universe on Nintendo DS in this action-packed, platform shooter with a hardcore, retro feel and a deep storyline that tailors itself to your game.

Lead your own specially selected team of Colonial Marines into action to rescue captured comrades and battle hordes of Xenomorphs with a vast array of weaponry from the legendary Aliens film title.

Can you handle the tension and terror which meets you at every level?

The Aliens Universe
The Aliens universe provides a setting full of horror, suspense and action. Using authentic environments inspired by the film series including the Sulaco and LV-426, the player will be immersed in an eerie, atmospheric world where any moment could bring their death.

Deep & rewarding combat
Wield authentic weapons from the films, including the pulse rifle, smart gun, flamethrower and more. Use cover and blindfire to outshoot Xenos or sneak through the Sulaco in stealth missions – but watch out for Xenos lurking in the dark.

Build your own squad of Colonial Marines
Recruit up to twenty individual Colonial Marines with distinct personalities, each designed by famed comic artist Chris Bachalo. Race to rescue captured comrades in five realtime minutes before they are implanted with Xenos.

Dynamic story system
Storyline and dialogue will change depending on who you have chosen for your team. Who will be able to stand up to the Xeno horde – and who will be dragged away to the hive?

Classic arcade feel
Aliens: Infestation features 2D side-scrolling gameplay in the style of Metroid or Castlevania with an arcade, retro feel. This couples with a deep combat system and extensive narrative to make this the ultimate in fan-service.

The ESRB has leaked another one, this time an Aliens game in development for (interestingly) the DS portable. According to the ESRB, the game will be rated T for Teen and feature the use of:

According to a similar leak from Australia a while back, the title is being made by A Boy and his Blob developer WayForward Tech, and is said to be a sidescroller.

Gamespot sought an explanation from SEGA, who replied that “we won’t comment on this one.”

Looks pretty likely to me. My question is, why the DS and not the 3DS?