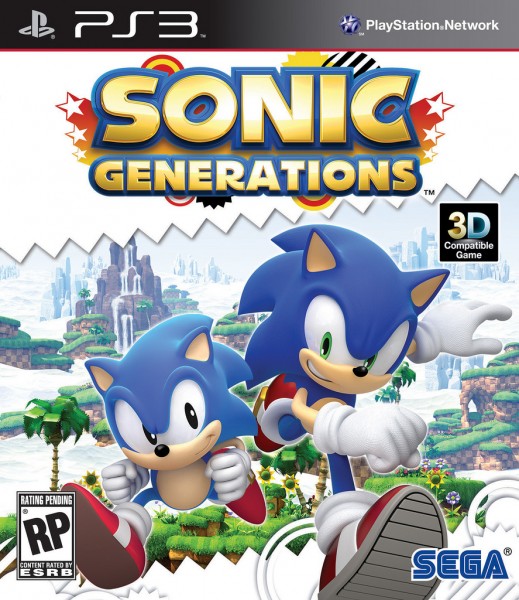 SEGA’s next big Sonic game is centered around his 20th anniversary. Even though Sonic started off this console generation with some awful games, Sonic Team has been learning from their mistakes and perfecting their skills. Have they finally delivered the Sonic game that all their fans want? 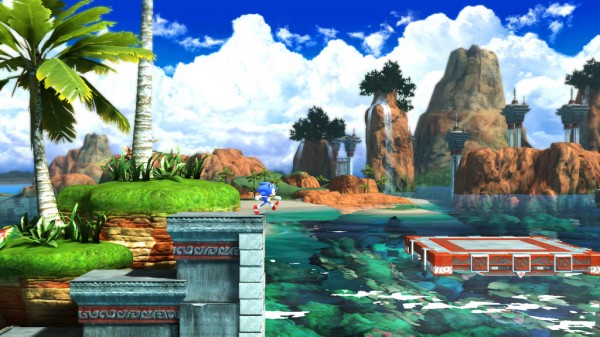 Sonic Generations is painted in vivid colors, which is expected from the Sonic franchise. Right when you booted up Sonic the Hedgehog on the SEGA Genesis you were introduced to Green Hill Zone, which sported bright blue skies and leafy green grass. This game is no different, as it comes packed with a great art style. Everything makes you feel nice and warm. You just have to love that nostalgia. Most of the levels benefit from this art style.

As far as graphics go, Sonic Generations isn’t anything special. This might be hard to listen to if you are a huge Sonic fan, but play the game and look at the textures. The game features pretty muddy textures, lighting isn’t anything special and nothing really stands out as amazing. But does this game need amazing graphics? No. It would be nice to have an astonishing looking title, but I’m glad that Sonic Team cut corners to get the game to run smoother. Thankfully, most regular users won’t notice the low resolution textures thanks to the great art style. 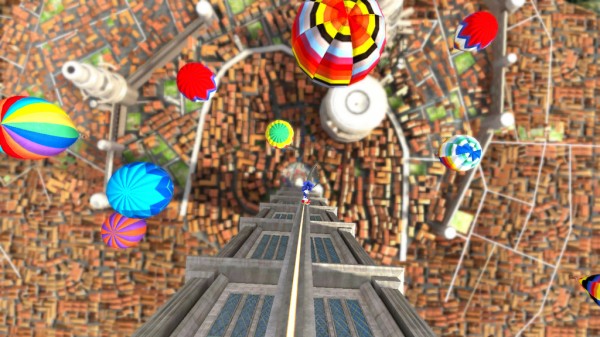 I think the only level that made me cringe when looking at the textures was Planet Wisp with modern Sonic. You can tell some of those textures in that level are straight out of the Wii version of Sonic Colors. Thankfully you will be moving too fast to think too much about stuff like this. Besides, the overall visual package is pretty good.

I had my doubts that the performance was going to be any good after they announced that the console versions would be capped at 30fps. Usually Sonic games tend to dip below their assigned framerate. This one does have slow down but it isn’t bad at all. It’s barely noticeable and doesn’t really affect gameplay. Sometimes things do freeze for a split second, possibly due to how fast the game is going, however it never caused me to die, so it wasn’t a big deal. 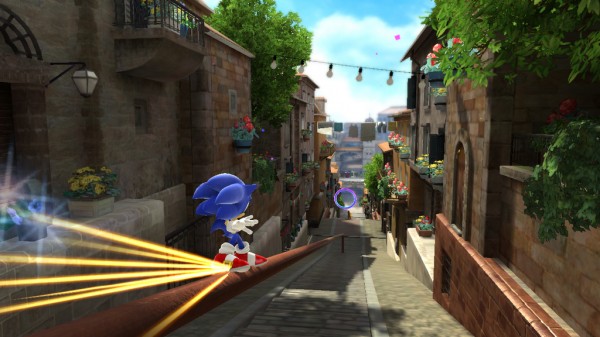 First we should discuss retro Sonic gameplay. I know there a ton of people that have put in hundreds of hours into studying the physics of Sonic the Hedgehog’s Genesis titles. But I have to be honest, I think classic Sonic plays pretty damn well. I notice little things that aren’t quite the same as the original games, but it doesn’t bother me and it shouldn’t bother you. For all of you who complained about Sonic 4 having a homing attack, I want to just tell you that it isn’t present in this title.

This is the classic Sonic gameplay people have been asking for. This isn’t Sonic Rush, this game has a ton of great platforming sections. Believe it or not, my favorite level in the game is City Escape with classic Sonic. It has some of the best platforming sections I have played in awhile. I love how they used the semi truck to destroy platforms if you aren’t fast enough to make it through. Plus, it’s just hard enough to be enjoyable. 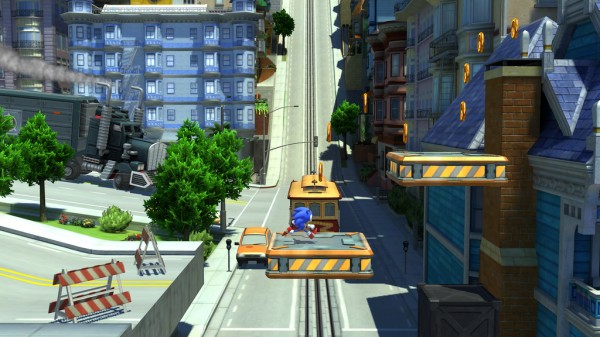 Modern Sonic bursts in with all the new tricks he has learned in the past 20 yeas. This includes stuff like the homing attack, light speed dash and many more. I never noticed how much I would miss little things like homing attacks. Sometimes you jump and you’re just a tad bit short to make it to the platform. With classic Sonic you would just fall down, but with modern Sonic you can hit the homing attack to give yourself that extra boost.

When I played Sonic Unleashed I thought that Sonic was going too fast. I don’t know if this game is slower or if I just got used to the speed, but I think modern Sonic is basically perfected. As you play through the game as modern Sonic you will start unlocking abilities, just as he did through time. The one complaint I have about the controls is that if I was jumping right, and all of a sudden I hit left and boosted, Sonic would still go right. 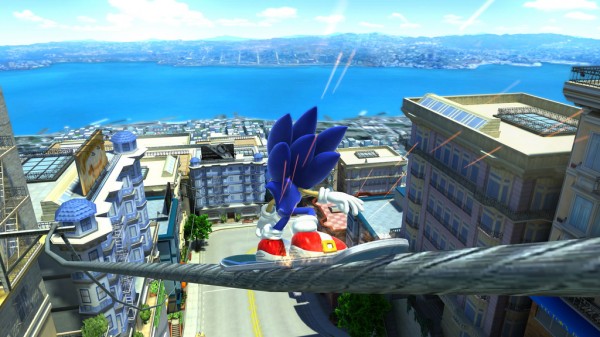 The game has you playing through classic Sonic levels all the way to modern levels. All the levels had to be redesigned, for both classic gameplay and modern. The game features 9 levels. Obvious levels like Green Hill Zone make the cut. Out of the classic levels, my favorite one was actually Chemical Plant Zone with modern Sonic. It’s odd to think that the 3D version of that level would be so much fun to play. Fans have complained about the choice in levels and how they skipped Sonic 3. They sort of skipped it, but they do have Sky Santurary which was in Sonic 3 & Knuckles.

Crisis City from Sonic the Hedgehog (2006) is put into the game and redone. I have to say, as much as I love to hate everything Sonic ‘06, I actually quite enjoyed myself when I played this level. It had all the right moments, a great step up from the original level. As for the worst level, in my opinion, it has to be Planet Wisp from Sonic Colors. I complained about this stage’s graphics and now I will complain about how cheap it is. The level has these miner baddies that will throw their pickaxes at you. It’s not that big of an issue until you are jumping up from a spring and they hit you with their pickaxe. There was this one part where jumping was automated and the pickaxes would always hit me.

The boss battles are taken from previous games, except for the last one. But the gameplay mechanics on the final boss was taken out of a previous Sonic title. They do change it up a bit, extending the fight and making it overall more challenging. 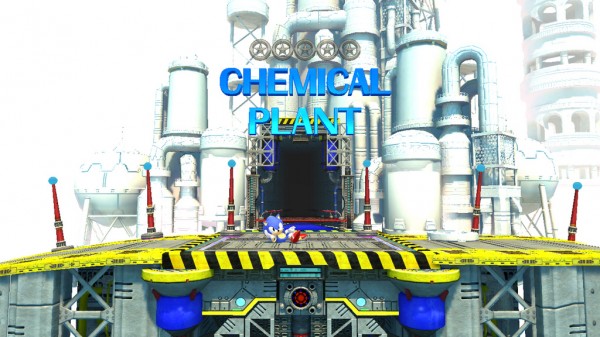 Replayabilty is pretty high for this title. The game features 90 challenge missions. Sometimes for these challenges they remix the level. A good example is the mission where they only give you one ring and you have to beat the level with it. The level’s remixed with more spikes and other hazards to make it harder for you to beat the challenge. Other times you just replay the same level and beat a set time. There are also challenges issued by comrades you unlock as you progress. I won’t say much about it since I don’t want to spoil it for those who haven’t read up on the leaks or played it. Doing challenges unlock upgrades that you can buy in the game with points you earn from playing.

The games most replayable part are the red rings. Throughout a level there are 10 red rings scattered. They are split in half, 5 for modern Sonic and 5 for classic Sonic. These rings force you to explore the level design in the game, which makes you appreciate it in the end. The red rings unlock music (50 tracks unlockable) and artwork (150 pieces availiable). If that wasn’t enough, the game has an online section. Here you can try and beat the best records around the world with ranking and a new game mode where you try to get as far as you can in a level in 30 seconds. As a bonus SEGA has included an emulated version of Sonic the Hedgehog (1991). It’s too bad that I already have this game on PSN. Still is a nice free gift. 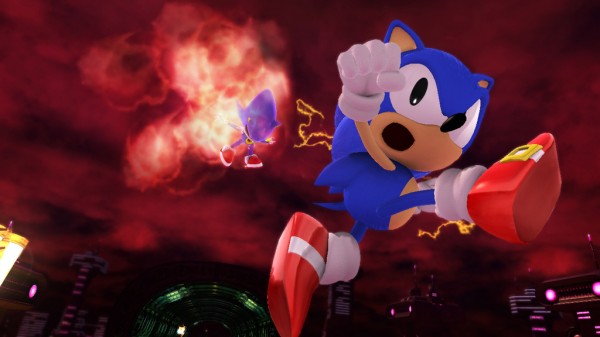 The love that was put into this game is undeniable. SEGA as a company wouldn’t be where they are today without the blue blur. The game might not feature state of the art graphics, but it has an excellent art style to make up for it. It is also jam packed with things to do after you beat it, and you will spend tons of hours trying to do everything. Not to mention completing all the challenges, levels and more with an S rank.

Sonic Generations isn’t just a great Sonic game, its a great game period. If you grew up with Sonic, this is a must buy. 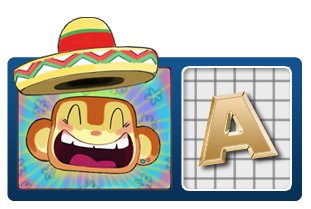