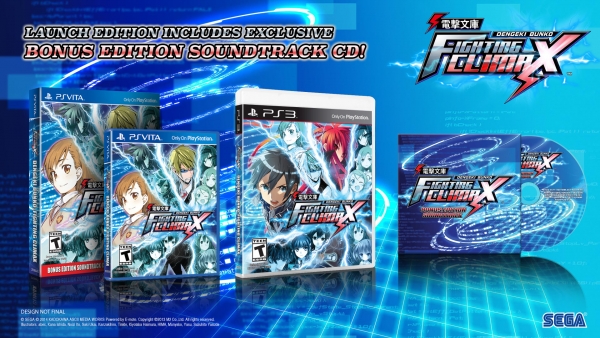 Dengeki Bunko: Fighting Climax is a 2D crossover fighting game featuring popular characters from Japanese novels published under the Dengeki Bunko label, and will be available this October in retail stores and digitally on PlayStation Network. The game will be $39.99 for the PS3 version and $29.99 for the PS Vita version.

The Dengeki Bunko collection boasts a vast array of beloved characters who lend themselves flawlessly to this highly balanced, easy-to-learn, high-action 2D fighting game. In Dengeki Bunko: Fighting Climax players attack, guard, and take damage in order to build their Climax Meter, allowing them to execute moves which recreate highlight scenes from the original novels, even adding specially arranged animations for characters who do not fight in the original works. The game includes characters from numerous Dengeki Bunko works alongside several fan-favorite SEGA characters brought together in SEGA-themed environments.