SEGA’s first involvement with Tetris was with an arcade game of the same name. It was a huge success in Japan, being a notable influence in the Tetris series going forward, but never caught on in the west. The main reason why SEGA’s Tetris never caught on was for copyright reasons involving Atari at the time, which due to a licensing deal meant that SEGA could not officially release their version of Tetris in the United States in particular.

SEGA’s version of Tetris also has infamy for it’s extremely rare Mega Drive version. With a rumored 10 copies ever produced, an authentic copy of Tetris on the Mega Drive can fetch for extremely high prices in the $10,000 range, if you’re even lucky to find a copy at all. A Master System version called Super Tetris was also unofficially produced, but only released in Korea.

SEGA’s Tetris is based on the original concept of Tetris, where like other variants the objective is to clear away lines by dropping Tetrimino and filling up rows. The game focuses on an endless mode, where the objective is to simply rake up a high score while surviving for as long as possible. In addition, every time the player cleared a level, the photo realistic background would change. While simple, SEGA’s Tetris features key mechanics that would influence future Tetris games. For example it is the first Tetris game to introduce the concept of lock delay, where you have a frame window to move Tetrimino before locking on the bottom. This concept would later be more emphasized in the Tetris: The Grand Master series, and would influence other falling block games like Puyo Puyo to adapt similar mechanics. It also has a cheeky chimp that pops up during the tutorial demo and game over screen. While SEGA’s Tetris was lowkey to non-existent in the west due to offerings by Nintendo and Atari/Tengen overshadowing any hopes of it gaining traction, aspects would later be revisited in future games. Tetris S for the SEGA Saturn despite being handled by a different publisher and developer borrows elements of SEGA’s Tetris (yes including having a chimp) for it’s cosmetics. SEGA Tetris for the Dreamcast and arcade is essentially an updated version of the 1988 game with 3D graphics and new features like the ability to play as multiple characters and a vs. CPU mode. Tetris The Grand Master and sequels would base the Tetrimino colors on SEGA’s Tetris. Puyo Puyo Tetris contains a background, Tetris skin, and remix of a song from SEGA’s Tetris. An enhanced version of SEGA’s Tetris appears in SEGA Ages 2500 Vol. 28: Tetris Collection dubbed Tetris New Century along with the original version. The chimp that appeared in SEGA’s Tetris also makes a cameo in 3D Thunder Blade‘s credits, hijacking a boat and firing a barrage of missiles haphazardly. Don’t be fooled by the different name, this is still a Tetris game through and through. Bloxeed was originally released in 1989, co-developed by SEGA and Elorg utilizing System C (aka System 14) hardware. It was notably the first game to utilize this type of hardware, which would later be utilized for the arcade games Columns and Columns II. The game was not ported to consoles at the time, likely due to the licensing problems that similarly effected SEGA’s Tetris above. However it would later appear as part of SEGA Ages 2500 Vol. 28: Tetris Collection.

The game plays similar to other Tetris titles, where you’re tasked with dropping Tetriminos and clearing lines. A key difference compared to SEGA’s first arcade Tetris is the ability to utilize powers. By clearing a special power block, a player will gain the ability to clear away blocks in different ways. “F” blocks will cause Flicky from the arcade game of the same name to appear and drop blocks, a “S” will cause a satellite to appear and destroy blocks, a “B” block will cause a bomb to appear and destroy everything surrounding it, a “16” block will cause a 16 ton weight to drop and clear everything below it similar to the weight in Fantasy Zone, and a “4” block will clear away 4 lines of blocks from the field. The game also adds rows periodically in order to add extra pressure.

Bloxeed would quickly fall into obscurity due to it’s limited release, mainly due to the lack of console ports for years. However the concept of utilizing powers would be experimented with future Tetris titles, either as an optional mode or the main draw. Examples including Tetris Gaiden, Magical Tetris Challenge, Tetris Axis with optional powers in the vs. CPU mode, and Puyo Puyo Tetris when playing Party mode. Flash Point is another variant under a different name. Released in 1989 in arcades by SEGA (some versions credit Datsu), and later unofficially by the company Zemina for the MSX and Master System. A Mega Drive port was planned but quietly cancelled, presumably for similar reasons as to why SEGA’s Tetris had an extremely limited production. However it’s possible to play a Mega Drive prototype version of the game in SEGA Ages 2500 Vol. 28: Tetris Collection, along with the original arcade game.

This variant of Tetris plays notably different from other Tetris titles. Unlike the other SEGA Tetris titles mentioned here, the game adapts a stage structure with a hundred of preset layouts. The objective with each stage is to clear a specific glowing block, overall giving the game a more puzzle emphasis. However, due to the RNG nature of the Tetrimino and the different layouts for each stages, players will constantly need to adapt to whatever layout they’re given. Flash Point caps at level 99 but continues to play until the player loses. In addition, lollygagging for too long will cause the drop speed to increase, so patience isn’t always the option.

The more “puzzle” emphasis of Flash Point would be revisited in some later Tetris titles. Tetris 2 has a puzzle mode where you have to clear away specific flashing blocks. Tetris with Cardcaptor Sakura would focus on puzzle solving by clearing away specific colored blocks in order to reveal a card. Tetris DS would have Mission Mode, where the player is tasked with preform specific objectives. While not related to Tetris, Puyo Puyo would adapt a puzzle emphasis with the Nazo Puyo spin-offs, where the player has to preform certain objectives to proceed. Originally released as an arcade title running on NAOMI hardware in 1999 and then later ported to the Dreamcast later in 2000, this game is an update of SEGA’s Tetris from 1988. Utilizing the NAOMI hardware, it remakes the original game utilizing polygons and higher quality and versatile music. Also the residential primate now wields a hammer, and brought along a dog that appears in 2 player that has a bone to pick with you.

The game, being based on the 1988 version, naturally focuses on an single player mode like the original. This means that the quirks of the original are present. However, there are a few changes. The first is the addition of a slot mechanic, that distributes points depending on how you clear rows. A single row stops on a strawberry, a double row stops on a cherry, a triple row stops on a banana, and a Tetris stops on a crown. If you manage you match three, you’ll be rewarded more points, the higher the value the more points rewarded. This means for those that want a higher score, you’ll need to master how to exploit the slot.

Another change is that it’s no longer endless. Instead the player has the goal of clearing over 300 lines and beat 17 levels, constantly being pressured with an increase of speed with each level. While climbing up the levels, the background will change to reference real world locations like Bai Jing and Mt. Rushmore, eventually leading to a trip through cyberspace and eventually the moon. Whoa.

The later Dreamcast version released in 2000 is based on the arcade version, but includes more features. Such as the ability to face off against CPUs and having a larger selection of characters to choose from. 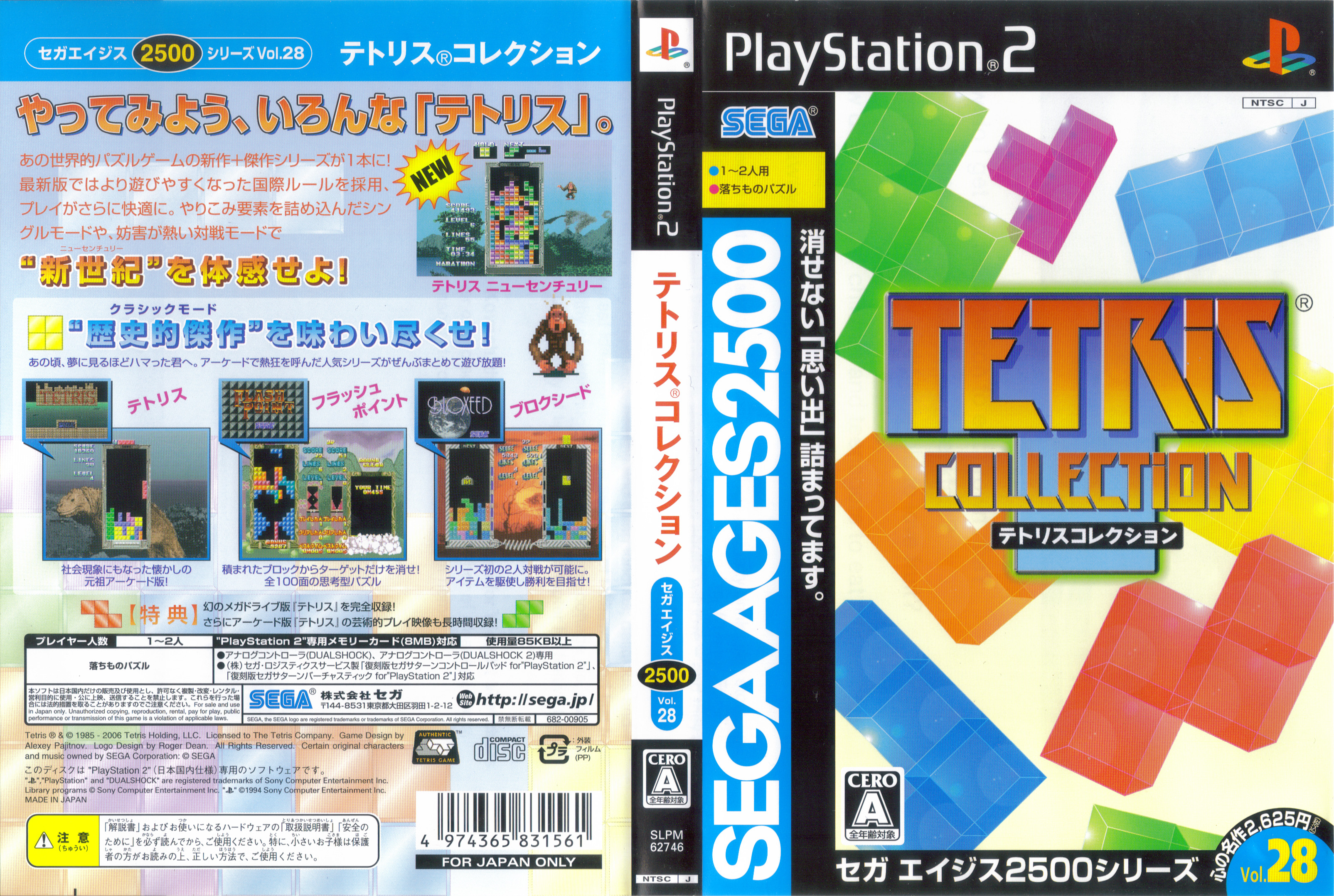 SEGA Ages 2500 Vol. 28: Tetris Collection was developed by M2. M2 might be familiar for those that have played SEGA Genesis games on Wii Virtual Console or the SEGA 3D series on the 3DS, normally being SEGA’s go to answer for emulation. M2 starting with the 20th volume that contained different variants of Space Harrier would overall develop for 10 of the volumes. Naturally because of the development studio’s experience with emulation, the SEGA Ages 2500 volumes developed by them such as SEGA Ages 2500 Series Vol. 32: Phantasy Star Complete Collection and SEGA Ages 2500 Series Vol. 33: Fantasy Zone Complete Collection tend to be the most sought after.

SEGA Ages 2500 Vol. 28: Tetris Collection as the name suggest focus on three main variants of Tetris by SEGA. This includes SEGA’s Tetris, Bloxeed, and Flash Point. While at first it’s nothing special, it does contain bonuses that might interest collectionists. The first is Tetris New Century, an enhanced version of SEGA’s Tetris with higher quality sound and music, and most importantly seeing more of the chimp goofing around. The second is an unreleased version of Flash Point for the Mega Drive and the limited Mega Drive version of Tetris are available. Finally you get several arcade variants of said games, for example it’s possible to play both the System 16 and System E versions of Tetris. Tetris Giant is probably the most unique of the titles here. Released in arcades, this version of Tetris has a notable “giant” theme with it. This even extends to the arcade sticks, which are far more massive than your normal arcade sticks.

Tetris Giant is based on your standard rule of Tetris but with one big (literal and metaphorical) difference. Tetrimino are far larger, effectively giving you a smaller playing field to toy with. Compared to other Tetris titles which use a 10 x 21 board, the board of Tetris Giant is 6 x 8. Aside from that, it plays like how you would expect from Tetris. There are two singleplayer modes the player can choose, Score Challenge where the player is tasked with getting 1st rank, and Line Challenge where with an extendable time limit the player has to clear as many rows as possible. It’s also possible to engage with another player. All while listening to songs with lyrics playing in the background.

Thus this ends our quick look at SEGA and Tetris. Hope you’ve had a nice read and possibly learned something today. Until than, keep T-Spinning!

One response to “SEGA Retrospective: SEGA and Tetris”