UK’s Official Nintendo Magazine has put up a preview for Sonic the Hedgehog 4: Episode 2. The preview was posted over in the Sonic Stadium forums, no scans as of right now. They did say that one of’ Sonic’s old side kicks will come back, most likely being Tails. But they also said this:

“Other than that, we’d expect more of the same from Episode II. More loops, more speed, more proper old-school Sonic physics and more awesome fake Mega Drive music complete with rubbish drum samples. Just the way we like it.”

Hard for me to take a magazine seriously that thought the first game had ‘proper old-school Sonic physics’. It didn’t. Unless they meant this new one had ‘more proper’ old-school physics, but I doubt that. Word for word preview after the jump.

END_OF_DOCUMENT_TOKEN_TO_BE_REPLACED 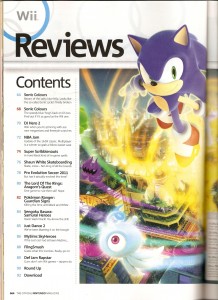