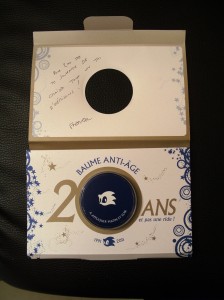 Check it out, SEGA France has sent people Sonic 20th anniversary branded….. anti-aging cream. Yes, so basically no hints on the upcoming projects. I guess this is suppose to suggest that this is Sonic’s secret in looking so young. I thought 20 years old was considered young?
I don’t know, making sense out of anything the French do is too much trouble. For some weird reason I want one of these.