Taiko No Tatsujin Plus 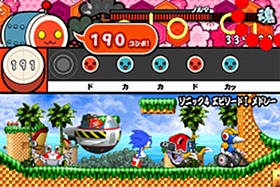 Sonic the Hedgehog has had his fair share of crossovers in the blue blur’s lifetime. Two of the most iconic have been the Mario crossovers, which include the Olympic titles, and Super Smash Bros Brawl. This time Sonic and its music will be featured in Namco’s upcoming drumming game Taiko No Tatsujin Plus.

So out of all the Sonic games that they could have picked to feature tunes from, which title did they end up choosing? Sonic 4: Episode 1. Ah, most likely just a crossover to promote their downloadable title.

Takio no Tatsujin Plus is an iPhone/iPad game. So it’s a good way to cross promote.