Welcome to SEGA Sequel Saturdays, Episode 6. This week I’m going to take on the challenge of creating another Sonic Adventure, the series in which Sonic broke free from his 2D universe and into full, uncompromised 3D gameplay. We have had many Sonic games since Sonic Adventure 2, but each has been a fairly radical departure from where Sonic’s 3D escapades began back on the Dreamcast. In this episode I’ll look at how a Sonic Adventure 3 could be great, assuming SEGA wouldn’t just be using the “Adventure” name for sales purposes, but actually making another game fully in the Sonic Adventure template. As always, we welcome and appreciate your craaaaaaaazy responses in the Comments section below.

Sonic has become an incredibly divisive series, one that, given a few years, you could conceivably write an entire Master’s Thesis on….maybe you even already can. One thing that can’t be denied is that despite what people say now, the Sonic Adventure series was incredibly well-received back on the Dreamcast, garnering critical praise, big sales, and positive fan reaction. A mere 6 months later, Sonic Adventure 2 was ported up to the Gamecube, and the same critic outlets pretty much tore it up despite it actually featuring additional features from the acclaimed Dreamcast version.

Could it be that the Sonic Adventure series just didn’t age well? It’s true that many games don’t, especially from that era. If that was the case, though, wouldn’t gamers have had the same reaction as the critics? A few months back I had a conversation with someone about Sonic Colors, which he didn’t seem too interested in playing, mainly because he hasn’t been interested in playing a Sonic game in years. To my surprise, he then asked me if I remembered Sonic Adventure 2: Battle on the Gamecube. “That game was one of the best games ever,” he said.

Despite the cold critical reception, Sonic Adventure 2: Battle outsold the original Sonic Adventure 2 by a large margin, and it continued to sell all throughout the Gamecube’s lifespan. The game seemed to bring the Sonic series to an entirely new audience of non-SEGA fans and, in general, they loved it: the same way SEGA fans dug the series back on their system.

The Sonic series has, I think, fallen victim to nostalgia. Nostalgia is a great thing in many cases, but for Sonic, it seems to be a curse rather than a blessing. Because of their nostalgia for the 2D Sonic titles, many critics, regardless of the quality of the game, will apparently refuse to accept a Sonic game that commits the heinous, unspeakable crime of featuring 3D gameplay. On the other hand, I think there’s a large amount of Sonic fans out there who instead treasure the Sonic Adventure series, and would love for a Sonic game to return to that.

So how can SEGA make another Sonic Adventure game, with the large cast of playable characters, action/adventure elements like exploration, virtual pet simulators, time attack race modes, and multiplayer battle components that are key components of a Sonic Adventure game? Like it or not, this is what Sonic Adventure always was, the attempt to create a 3D platformer with a large variety of different styles of gameplay, multiple characters to choose from, dramatic final boss encounters, human interaction, and of course, Chao gardens.

Well, I guess maybe you don’t need *all* those things. If I were to develop a Sonic Adventure 3, there are certain aspects I’d scale back. In the story mode, Sonic, Tails, and Knuckles would be the only playable characters in the levels themselves. Each character would have their own stages, and it would alternate between them like Sonic Adventure 2 did as opposed to Sonic Adventure 1’s character wheel. However, and this is the important part, all of the characters would have speed-based stages. Knuckles was playable back on the Genesis, but nobody cared because his levels were fast like Sonic’s. My Sonic Adventure 3 would have Tails/Knuckles levels that would be all about, like Sonic’s, around 5 minutes of getting from the start to the finish. Sonic’s levels would be a little bit faster, Tails’s maybe slightly more platforming-driven, Knuckles maybe with a little more emphasis on combat, but all high-speed levels.

Unlike Sonic Adventure 1 and 2, where everyone loved Sonic’s levels but only tolerated the other characters’ stages, in this game, it would be totally possible for a Tails or Knuckles stage to be your favorite in the game. They’d all have their amazing, jaw-dropping moments and their fast speeds. Where they’d improve on what we saw in the first two Adventure games would be in the amount of different paths, which would be vastly increased, as well as of course the amount of epic set pieces now possible on next gen hardware. The controls would return to the Adventure physics and speeds, no more of this slippery stuff that’s become commonplace in Sonic games over the past couple years.

Other characters would be playable, but not in the same sense. Characters like Eggman, Shadow, (like it or not, guys, he’s still alive, and the kids love him, so….) and Amy would be playable for the occasional boss fight, probably a boss fight each, but would not have their own levels. They all would play roles in the story, some big, some small, but the story would contain the same strong writing and voice acting as Sonic Colors did, maybe with slightly less slapstick but with a sense of humor. The world would still need saving by the end, and the Last mode would be pretty epic. 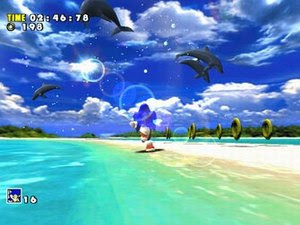 If someone wanted to, those above three paragraphs could be their entire game. They would have a pure Sonic experience in the most basic sense, and not have to worry about any of the other “Adventure” aspects getting in the way of their enjoyment of it.

When you would load up your copy of Sonic Adventure 3, you’d end up in a hub world. The hub worlds would be big and expansive, but, like everything else, totally optional. A big red dot on the map in the top-right corner of the screen would make sure you’d always know exactly where you would need to go to get to the next level and progress the story, and you would never be required to do anything else in the hub worlds.

However, for those who’d want to do more, the hub worlds would offer a ton of options. Here you’d be able to select your character, and you’d get to pick anyone who was playable in the story, even if they didn’t get their own stages. You’d be able to head to the Chao gardens, where you could hatch and breed your chao, bringing it animals and energy capsules from the levels, just like in Sonic Adventure/Sonic Adventure 2. You’d get to race them, have them fight, take them to school, and, in a new feature, bring them outside the garden on a leash and into the hub world, where you’d get to take them into previously-visited levels. Sort of like an in-game Chao Adventure. You’d only have access to certain parts of each stage with your Chao, but they’d get to hunt animals for themselves and meet other Chao who are out on an adventure, boosting their stats more than usual by doing this.

You’d also be able to take them to things like the Chao Theatre, where they’d get to watch their fellow Chao either perform music, perform in talent shows, or whatever….all of which would increase the Chao’s “intelligence,” providing a stat boost. Your Chao would also be able to enter the talent show and be judged by a panel of Chao judges. Prizes would be awarded depending on how well you’ve trained it in the skill that it’s performing. You’d get to provide encouragement as the Chao performs his talent, like how it worked in the races in Adventures 1 and 2.

Rather than your Chao simply becoming “good or evil,” they’d begin to partially resemble the character who raised them, so Eggman’s Chao would probably grow to be slightly fat, Sonic’s would develop some spikey hair, all that good stuff. 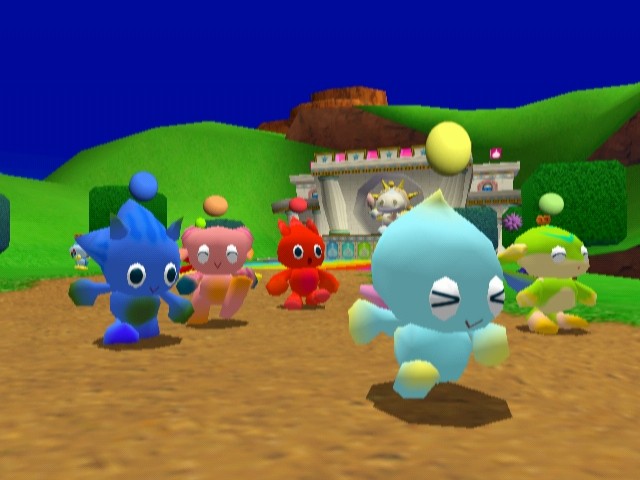 Aside from the Chao raising, which anyone could spend hours upon hours doing, you’d also be able to experience some great mini-games when in the hub world. For example, you could head on over to the Spinball Zone where you’d get to play some Sonic-themed pinball games with your character of choice, (a machine would role Eggman up into a ball) there would be mini-games based around the levels themselves (think: Twinkle Circuit,) there would be a Retro Hut where you could experience some old school 2D sidescroller action reminiscent of the old games, and, of course, you’d have the option to purchase additional cool moves for your character (Sonic, Tails, or Knuckles only) or outfits and toys for your Chao. Some of this would be unlockable, which you’d purchase with the hub worlds’ currency. You’d be able to get this cash by trading in rings you collected during the levels, playing multiplayer games, or doing tasks for people.

Like Super Smash Bros, you’d gain rewards (in this case, currency) from playing multiplayer matches, both online and offline. The multiplayer would have race modes, it would have co-op, it would have online Chao competitions, and even Sonic Shuffle/Mario Party board game stuff. Secret Rings tried doing this, but Sonic Adventure 3 would actually do this well.

People in the hub worlds would act differently to you depending on which character you’d be controlling, and they’d offer you different types of missions. These missions would be, again, entirely optional. This is where you’d get the hub world currency if you didn’t want to get it from the multiplayer mode or by trading in rings from the levels.

Back to the levels themselves for a minute. Like in Sonic Adventure 2, you’d have additional misions to complete in each stage to acquire emblems, and you’d be able to access a map of all the levels for easy mission selecting (similar to Sonic Adventure 2) from a place in the hub world.

As far as music goes, the theme songs would have to be less…terrible than those featured in Colors, which shouldn’t be too hard to do, but they’d only be featured in small bits throughout the game. (You’d be able to hear the full song in the sound menu if you so desired, also accessed from a place in the hub world.) Crush 40 would return for those, I mean, they might as well, and hopefully their lyrics would go through some sort of approval process. I’d mainly want them back not for their theme songs, but because I think level tracks like this one just make Sonic Adventure what it is.

And whoever’s responsible for this…

…whatever this is, we’d need them back. It would be my absolute mission to get this guy to come back to do at least one song. I don’t know where I’d put it, but it’d definitely be there somewhere, I just don’t see any other choice. 😈

I’m convinced that Sonic Adventure 3 could be done. It could be faithful to what made Sonic Adventure what it was, but at the same time, it would address the complaints that many critics have, in retrospect, had with the series. This wouldn’t be the game for “only Sonic being playable,” it wouldn’t be a game for (much) 2-D platforming, it wouldn’t be a game with roller coasters of death or 10-minute long levels. This would be a return to the same fun style of the Sonic Adventure series and all the content that they offered, but this time, much of that content would be optional. For those who would choose to explore it, though, it would be a lot of fun.