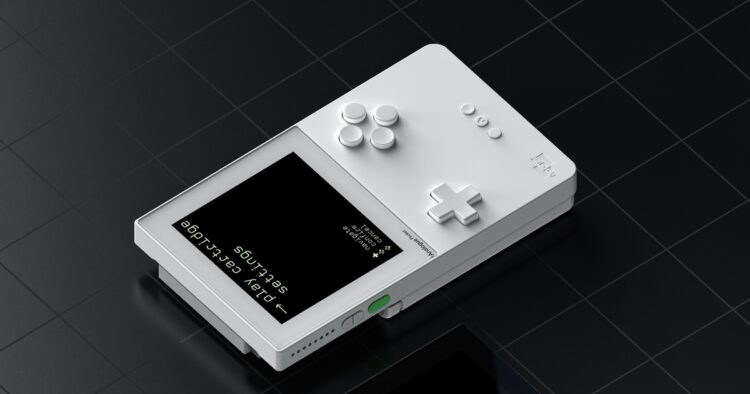 Fans of FPGA (Field Programmable Gate Array) console clones may remember Analogue’s FPGA Sega Genesis/Mega-Drive clone system, the Mega SG, released to widespread acclaim in 2019. Since then, they’ve been busy working on clones of other beloved early 90’s consoles, including the subject of this article: The Analogue Pocket. For the uninitiated, the Analogue Pocket is an FPGA recreation of the Game Boy and capable of playing your Game Boy, Game Boy Color, and Game Boy Advance cartridges in crisp HD and on your TV if you buy the separately sold dock. This also includes tons of options to tweak the video and sound if you are technically savvy enough and patient enough to mess with it and get the most out of your games, just like Analogue’s other systems, and that’s hardly half of it’s capabilities. So, did you click NintendoBits by accident? How does this involve Sega, you ask? Well, the Analogue Pocket can also play your Game Gear cartridges as well, provided you buy the Game Gear cartridge adaptor, which is also sold separately.

However, our subject today is on the new OpenFPGA feature recently made available to Pocket owners with firmware update version 1.1 beta. In short, this allows developers to make all new “cores” for the Pocket’s FPGA hardware, allowing it to run games from other retro game hardware it was not originally intended to replicate. This is an official update from Analogue, which they’ve made clear since the Pocket’s original announcement was something they’d always intended for it to have, even if it couldn’t be there on release. Now that it’s finally here, the first new community developed cores included ones made to run Sega Game Gear, Master System, and SG-1000 games, created by spiritualized1997. You can download these straight from their Github page. There, you’ll also find instructions to install the cores, though it only involves dragging and dropping the core’s files onto the SD card you use with your Pocket. Just make sure your Pocket’s firmware is up to date first.

As mentioned before, this core isn’t needed to play Game Gear, at least, but only if you have at least one Game Gear cartridge and the adaptor to use with it. Think of cores like software emulators on your computer or mobile device. Although they don’t work quite the same way, they serve the same purpose: running game roms (Which I trust you have legally obtained) conveniently from a digital source. In this case, you can load your favorite Game Gear, Master System, and/or SG-1000 game roms onto your Pocket’s SD card, activate the appropriate core, select your roms, and go to town.

In time, this should make the Analogue Pocket an excellent choice for playing your favorite retro games from many systems on the go, but for now, it is the perfect option for playing Sega’s entire 8-bit home console library. It’s only known caveat so far is that the Master System core cannot run FM sound with compatible games. You’ll have to stick with PSG until a future update.

If you’re interested in an Analogue Pocket and it’s accessories, you can buy them direct from Analogue’s website. Keep in mind that, as of this writing, no shipments on any Pocket related hardware will be carried out until 2023, so be prepared to wait it out. Analogue’s other past consoles, like the Mega SG, occasionally come back in stock too, so keep your eyes open if you still want any of those.

Does this feature have you excited to try the Analogue Pocket? Has it convinced you to buy one if you didn’t already? What other game systems would you like to see added in the future? I’m sure Genesis and many of Sega’s 80’s and early 90’s arcade boards are just a matter of time, but let us know in the comments below what you think hope could happen.