Give us an overworld 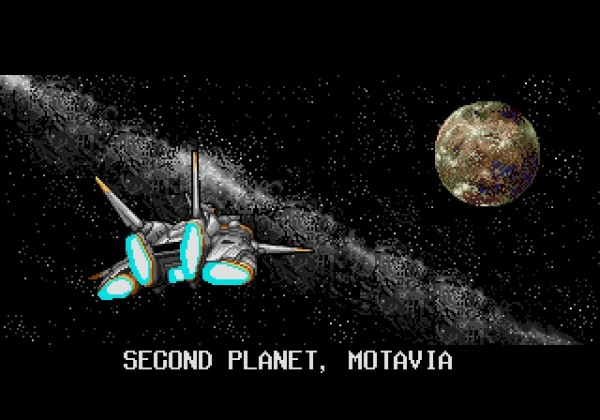 Every since I first started playing Phantasy Star Online on Dreamcast, I always wondered what was beyond that border, you know, beyond those trees in the forest levels. But invisible walls hinder my exporation!  I thought Phantasy Star Universe would be the game too finally break down that wall, especially when they showed the early CG trailers of Ethan Weber flying through the city.  Sadly, it was not too be!

Many people may disagree and say that they don’t want too have to walk miles and miles just too get to a mission, I don’t think it has too be forced. You can and should be able too start a mission and teleport to it whenever you want, but I think having the ability to just walk around the overworld and kill monsters is something that has been needing.

It would be nice to walk around big cities, look at the neon signs shine through. It would be nice to go into forest type areas, then head back to a broken futuristic city and see the contrast the game has too offer.  The franchise can offer an overworld that will awe and amaze players unlike any other MMOs out there, I hope they capitalize on this originality.

Not all about grinding 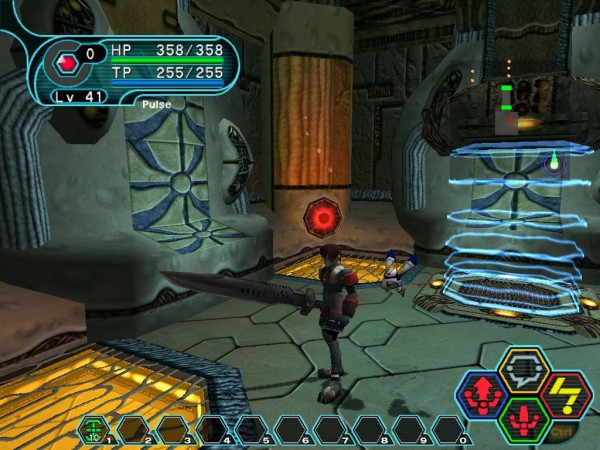 I always dreampt of having vehicles, hover boards and all that stuff in Phantasy Star Universe. Especially if they would be customizable.

SEGA could host some sort of “Show off your vehicle day” and give out virtual prizes, have missions where you need use your vehicles.  This could also open options for other game modes such as ‘versus racing’ like the half baked hover board mission in PSU, but you know… Better!

Another thing worth a mention is MAGs, those little cuties that we all fell in love with and never forgot too took care of.  Trust me, I remember yelling at users for standing there feeding their MAG while i’m getting my ass handed to me.  We would like to see MAG become a virtual pet of sorts, similar too Chao from Sonic Adventure with mini games we can compete against others in. It sure as hell added a lot more replayability to Sonic Adventure! I must have replayed those levels hundreds of times just too find animals and drives too splice with my Chao. 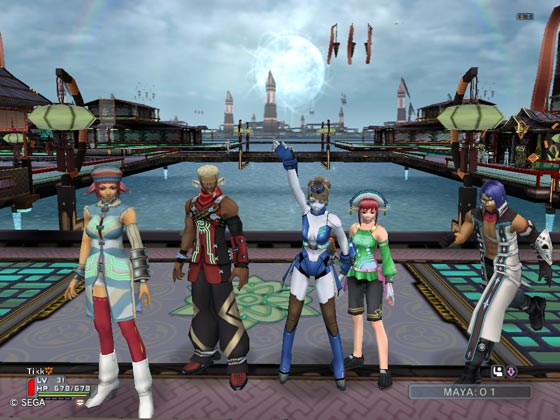 [Standing around, because Moatoob is still closed. >.> ]

This is a big ‘NO’ in my book, if you sell someone a game for $50, at the very least give them all the content they paid for, day one. When Phantasy Star Universe was released, I was so excited I pre-ordered the game from GameStop, got it home, popped the sucker in only too find that most of the content was blocked off, whole planets out of bounds!

Other MMOs and Online games don’t charge you too wait sit around waiting to play what you have already paid for, neither should Phantasy Star series!

Player versus player, the ultimate showdown! Who is superior?! Bragging rights!

Believe it or not, many people on Phantasy Star Online liked the PVP, including myself. Horribly unballanced, but something that SEGA  can expand on for sure! It looks good in Phantasy Star: Portable 2!

Clan versus clan would be cool and a few new modes like ‘king of the hill’ or ‘defense’, where your team has to try and occupy a building and defend it against incoming enemies. The modes could bring new kinds of players to PSO, not just the ones with neck beards that sit in lobbies and flirt with ‘girls’. 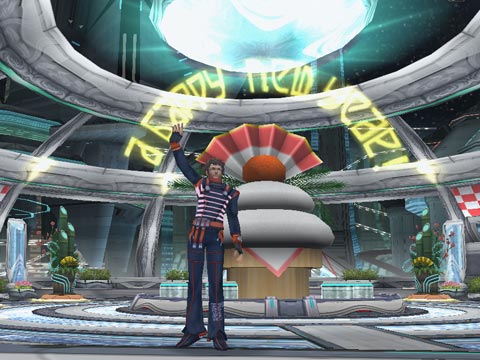 [Your actions can change all of this…]

People that play MMO’s want too be unique, they want to be recognized for their achievements. Wouldn’t it be cool if the world changed, depending on player actions in the game world? Such as having learder boards in lobbies showing which clans are on top or high scores on runs and challenges too try and beat? Wouldn’t you like to see your name up in lights? I know I would!

Or what about  in game “achievements” that players too earn and be ‘recognized’ for their skill like in Halo 3? 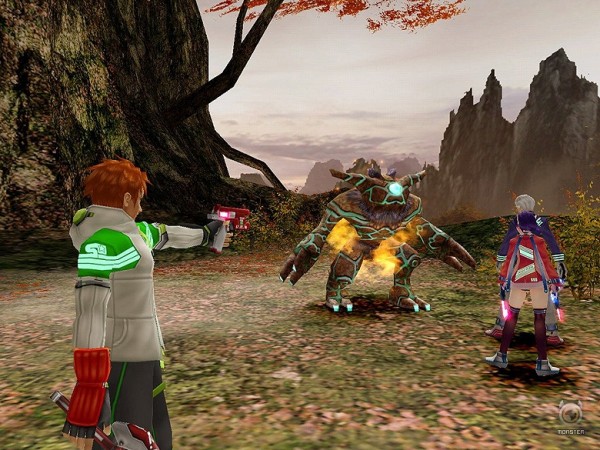 I love Phantasy Star Online, but by todays standards the fighting system feels outdated and static. It does not feel as ‘action’ packed as it did when I first picked the game up almost 10 years ago. There are major problems with classes, this goes on and still plagues Phantasy Star Universe.

I’ll start with Rangers, too me the whole gunplay needs to be reworked. The main concern in PSO was the lack of camera controls and lock on, you simply had too shoot the closes enemy to you. This is the reason I mainly played Melee combat, fighting a losing battle with the controls was a pain in the arse. Phantasy Star Universe addressed this problem with a lock on and a first person mode, but it was still a rather clunky affair.

We think an ‘over the shoulder camera’, like most 3rd person action games employ now would solve this issues.

Hunters also could use a battle system overhaul, especially in Phantasy Star Universe. It would be awesome if SEGA could get a ‘combat system’ that lets you customize moves and unlock new ones with a deeper and more involved combat system along the lines of Bayonetta. Having different combos stringed together would make the game more ‘addictive’ and combat would no longer be a chore.  This is something no other online game could offer like PSO could. 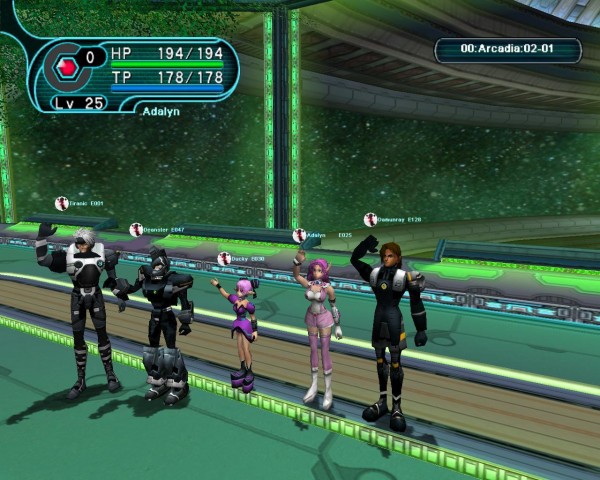 Online games are all about playing together and nothing says ‘togeather’ like a nice clan of close friends! Support for clans on Phantasy Star Online has been a little sparse. Really, bring back guild points from Blue Burst!

It would be cool to have special missions just for clans that are super hard and focus on team work. In the end, your clan gets virtual prizes that you can show of in your clan’s Room, much like your own room from PSU but… BIGGER!

This is something that I always hated about the games. There is always a sense of deja vu when it comes too enemie move sets. This can also be said for dungeons espically on PSU which didn’t even have the set peice rooms that featured on PSO.

If I’m going to re-run the same locations over and over again at least give me some eye candy! 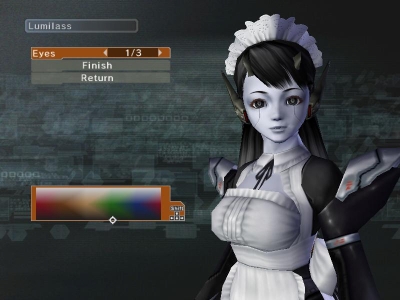 One of the biggest draws for me on PSO and PSU was the character customization! By todays standards it’s nothing special but back in the day it was the shit! You could make him short or fat, tall or skinny, Amazing!

I think SEGA needs to take it to another level in the next PSO. Add the ability to move facial structures, make them buff, old and so on. I think having thousands of options in constructing your character will be one of the biggest draws of any PSO game.

As mentioned before I would also like too be able to customize (pimp) my rides and maybe even my Mag!

SEGA should really consider new ways of ‘making money’ from PSO. I suggest going for the ‘Free to play’ model with limited areas for more casual gamers on their own server and when they get hooked like my mom on crystal meth, they might then choose to upgrade their account and pay for the full game.

How about charging one price for the first year and knocking it down for the second year, rewarding long time players?

Or how about a completely free to play model where you pay for new content when you want it. Sure you could play the vanilla game for free but buy items, clothes, missions ect.

Well that raps it up for this week! Hope you enjoyed it and don’t forget too comment!