Famitsu has given up some more Sonic Colors information, to feed all your Sonic loving thirst.  We already know that in Colors, Sonic teams up with aliens called Wisps to stop Eggman from building “Eggman Planet Park.” Which in my opinion sounds like a great park.

The Wisps in the game give Sonic special powers called “Color Power.” The White Wisp gives Sonic the power “Cyan Laser” which turns Sonic into a beam of light, which increases his speed and lets him bounce off walls.

In the game you will find Wisps in different colors, each offering their own unique ability. One that was mentioned before was the ability to dig underground. Other bit of information is that the DS version will span both screens and the Wii will have full 3-D maps. The game comes out in Japan this Winter.

UPDATE: Scan after the jump 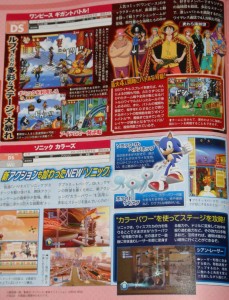 2 responses to “Sonic Colors turns Sonic into a light beam”