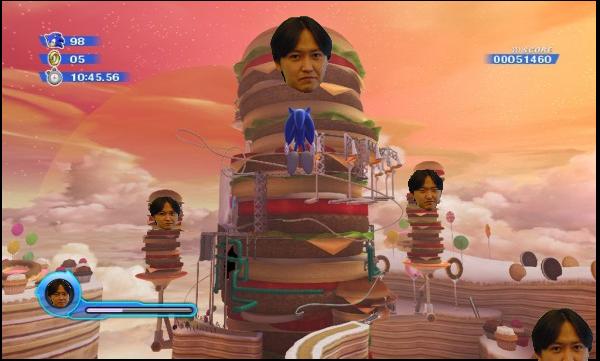 Our man at E3, Nuckles87 scored a pretty nice interview today with Takashi Iizuka. As we are teamed up with Sonic Stadium for this the SS guys get first dibs on any Sonic related news… Which is fair enough as we’ll be getting all of the other, better Sega news exclusive to bits.

Here is some choice parts of the interview:

SS – Is this game made with just children in mind, or more for a general audience?

Iizuka – Of course, we are putting in kid friendly elements, but it’s not just for kids. The are some challenging elements put in as well.

SS – What is the length of the game, in hours?

Iizuka – The game’s still in development, but in previous Sonic games, there would be act 1 and act 2 of 1 zone. In this case, for each of these worlds there are several stages. Also, once you get more color powers from other worlds, you can go back to older levels and find new paths to access. It also depends on how dedicated you are to finding all the items in the game.

SS – Last question, any chance of a new NiGHTS or Burning Rangers game?

Iizuka – (Laughs) We can’t talk about that right now.

Make sure you read the rest of the interview HERE!