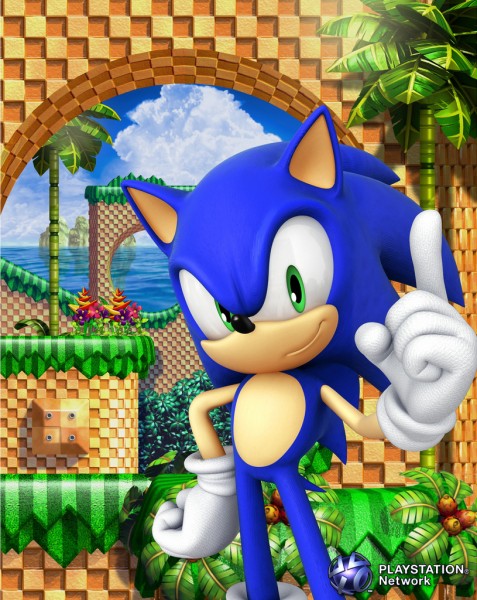 This is not the first time that SEGA has claimed that Sonic is going back to his roots, delivering an excellent game. Let’s not forget the bastard game called Sonic the Hedgehog on the Xbox 360 and Playstation 3. What a reboot. But now SEGA has decided to tackle a sequel to the original games. 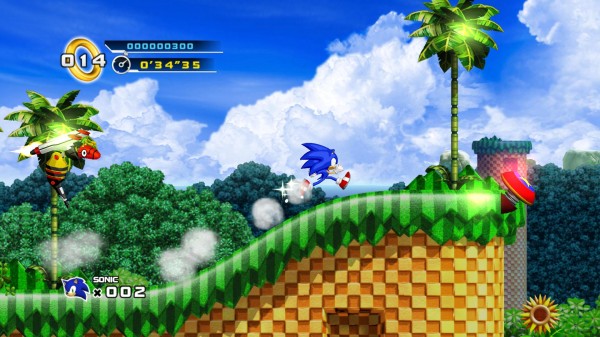 The game comes out, blazing with 1080p graphics. The game looks really nice. I was one of those people that where super disappointed in the game not being 2-D sprite based. But after I thought about where the game would have arrived, the 3-D graphics didn’t bother me. If you think about it, if Sonic 4 was to be released after 1994 (after Sonic 3), it would have most likely been a title for SEGA’s new console, the SEGA Saturn. If you actually take a look at some of the 3D graphics Sonic Team was thinking about, the graphics in Sonic 4 make sense.

The game also features a leaner and green eyed Sonic from the redesigns Sonic Team made for Sonic Adventure. A bit disappointing, since it should have probably stayed with the classic look. If anything, they should have had a unlockable classic skin. The game has good graphics, one of the best looking downloadable titles. It isn’t a realistic looking game, so it is limited, but for what it is, it looks awesome. There is one small issue, there is some framerate issues when you blow up Robotnik, aka there are explosions on screen. It isn’t a game breaking problem, since you don’t really have to do anything with Sonic after you beat him. 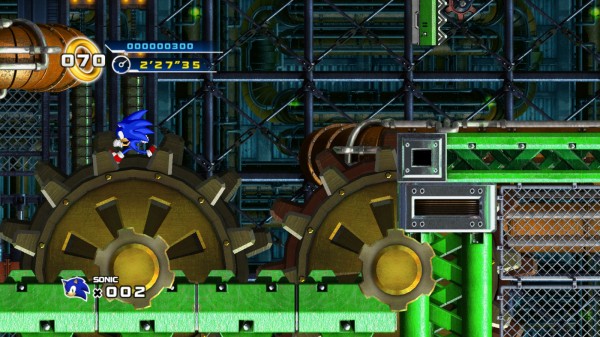 The game offers four (actual) zones to play, which seems rather short. There is no way around it, the game is short. The second thing I hated was that the levels are basically taken from past levels, at least location choices. The game has you start in Splash Hill Zone, a game that basically took inspiration from Green Hill Zone/Emerald Hill Zone.  This is fine, most Sonic games actually have the first level inspired by Green Hill Zone. Not to mention, the first act is possibly one of the best speed run levels in the whole game.

The game moves along to Casino Street Zone, which is a zone there reminds you of all the Sonic levels that are Casino based like Casino Night Zone  (plus a ton of others). Regardless, the design of the levels in this game are rather unique. Act 2 of the game, Road of Cards, is exclusive to the console version and offers a cool gimmick where Sonic rides a deck of cards. Each of the acts in the zone offer something different, some are annoying, like one of the Casino Street acts has you shooting from canons. I found this act to be quite annoying. But the good thing is that the levels offer platforming. You can’t just hold down right and win, you will have to slow down and jump around in some sections. This is a very positive thing to see.

The third zone in the game, Lost Labyrinth Zone will remind you a lot of Hydrocity Zone. Did they get inspired by the design of that zone? Of course. Even though I hate freaking water levels in Sonic games, this one wasn’t too annoying, at least not with the drowning parts. Just like Casino Street, each of acts tries to change things up to be unique. There is one act that has you balancing yourself on top of a ball and if you fall off you die. Sure this could be annoying, but I like how they tried to have diffrent game play elements into the mix. SEGA changed the infamous minecart, it is hardly in the zone anymore. You do go on a minecart for a few seconds in a stage, it is automatically moving and you can jump over obstacles (sort of reminded me of Donkey Kong Country’s Mine Cart Carnage level). The long minecart stage was replaced with a act that has you light torches to light up the room and find your path. Better, if you ask me.

The last and final zone (if you count EGG Station as a zone, you are mental. Its basically a series of boss fights) is Mad Gear Zone, which is inspired by Metropolis Zone. I always liked Metropolis Zone and I have to admit, playing through Mad Gear Zone, it easily became my favorite zones. The game starts off the zone with a simple level that has the steam gimmick that launches you up, sideways and downwards. The second act has you escape, a faster zone and even uses a gear gimmick (you stand on a gear and run to move it). This was also used in past Sonic games.

The game also has special stages, that are activated by beating a act with 100 rings. The special stages are inspired by the special stage from the first Sonic game. Unlike the one in Sonic 1, in this version of the special stage, the user controls the maze with the d-pad, analogue stick and Sixaxis (if you assign it, I suggest not to). The game’s biggest let down are the boss fights. Basically you fight boss battles from the past Sonic games. Like Splash Hill will have the boss battle from Greet Hill Zone, Casino Street Zone will have the boss battle from  Casino Night Zone, Lost Labyrinth takes the start of the fight from Labyrinth Zonethen adds a puzzle maze mode, and last is Mad Gear Zone which takes inspiration from Mushroom Hill in Sonic 3 boss battle.

Then you have to go to E.G.G Station zone that basically makes you fight all 4 bosses in a row, in the end you have to fight a mech Robotnik that is basically taken right out of Sonic 2 final boss fight. Only that this one has extended gimmicks. They are all a bit different, but inspired by past titles. This is a let down.. When I wanted Sonic 4, I wanted new levels art styles and ideas, not vomited up left overs taken from past Sonic titles. Even though some of the designs in the levels are excellent, they could have made new locations to make them even better. 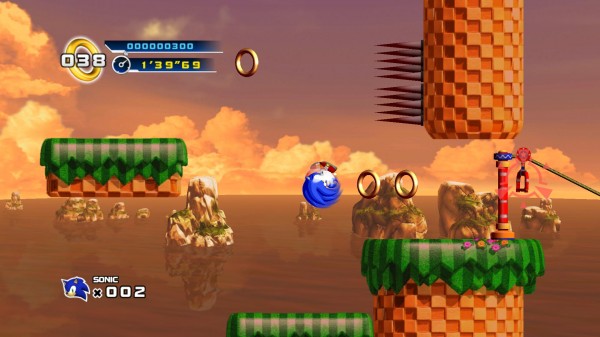 The game has pretty standard controls, just like the Genesis games. The only thing they added was the controversial homing attack. This really ticked me off, why bother revisiting the old classics to add stuff from new games? Yes, its true that almost each new Sonic game, out of the original 3, tried to change the gameplay, but would they have needed a homing attack in a non 3D title?

Even though I disagree with having homing attack, I think it is probably the best inclusion of homing attack in the entire Sonic franchise. Its there and it doesn’t really over power the platforming. The homing attack is also used to get into higher areas, like there will be a chain of enemies that you should hit with the homing attack and also to break obstacle. Sometimes the homing attack was a bit lazy implemented. That being said, sadly, you need to use homing attack to get through the game.

One of the biggest complaints in the game are the change of physics and I echo those cries. Is it because I think the game should have stayed exactly the same as the 16-bit titles? Nope. My complaint is that the physics in the 16-bit titles are better than the physics in Sonic 4. Period. Sadly there is no way to argue, there is something wrong with the way he accelerates, the jumping and the way he loops. Just feels really weird right when you start. Thankfully I got used to the physics and had a great time with the title, but they should still be improved for future games. The physics in Sonic 4 aren’t awful or bad, just not as good as the past titles. 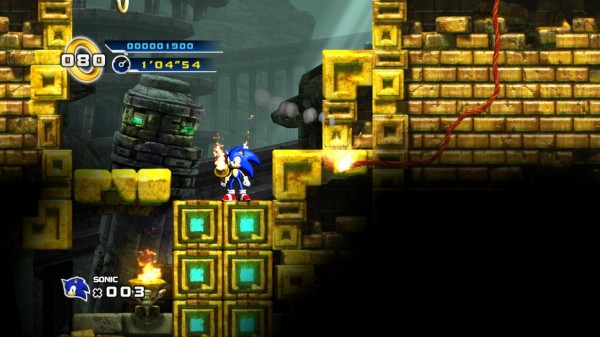 The game can be completed in about 2 hours, give or take. That is quite a short game for $15 dollars. I think it is a bit overpriced, the game should have  been $10 dollars. But I’m sure SEGA knew they could get away with $15 dollars for such a anticipated title. The game does let you replay your choice of levels, through the map select screen. Game also offers a score and time attack mode with leaderboards. I think replayability for a good score is even greater than the Genesis games, due to being able to compete online leaderboards.

If that was not enough, there are also 7 chaos emeralds to unlock, which give you the ability to play the game as Super Sonic. I’m sure unlocking everything should take you under 4 hours. Replaybility could have been higher, but its a fun little game. 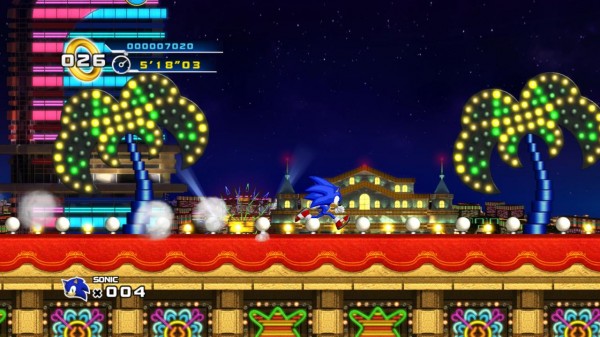 Sonic 4 – Episode 1 might be a bit overpriced, but it packs in a ton of fun in 4 zones. Some disappointments come along with such a high profile release, such as the change in physics and including the homing attack . Most of the complaints come from hardcore purist that say ‘this shouldn’t be Sonic 4’, that is up for debate. Regardless of the name of the title, this is still a fun Sonic game with some really well designed levels that are fun to play through and offer platforming. Did I mention that Sonic doesn’t babble in his annoying voice about stupid shit? Now that is a plus.

Another issue is that the game, from the locations in levels and boss battles, seems like a remake. Sonic Team need to stop assuming that Sonic fans want to see the same levels over again. If you are making Sonic 4, come up with all new locations, level themes and boss battles.