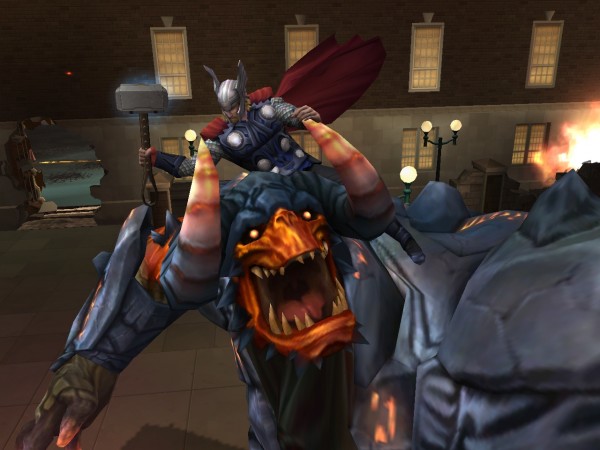 SEGA today announced that Chris Hemsworth (playing Thor) and Tom Hiddleston (playing Loki) will be voicing their on screen roles in the upcoming movie based game. You know, movie talent coming to video games, you guys excited?

I would be, if the game didn’t look like a PSP game. Come on, what the hell is going on here SEGA? I usually try to not to whine, but this is getting embarrassing. Are they even trying?

After the jump is the press release, if you are into SEGA hyping their products with words like “AAA talent” and “truly cinematic interactive experience.” 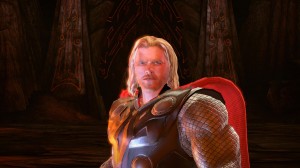 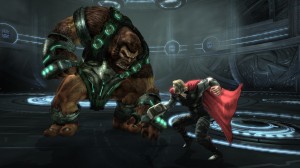 Hemsworth to Voice the Mighty Thor and Hiddleston his Antagonist Loki in the Marvel Icon’s Epic Action Adventure Game; Actors’ Likenesses Will Also Appear in Game

SAN FRANCISCO & LONDON – December 2, 2010 –SEGA® Europe Ltd. and SEGA® of America, Inc. today announced they have signed Chris Hemsworth to voice the title role and Tom Hiddleston to voice Loki in the upcoming action adventure Thor™: God of Thunder. Both actors’ likenesses will also be used in the game, which is based on the legendary franchise from Marvel Entertainment, and marks Thor’s first standalone appearance in a video game.

“Bringing in Chris and Tom to star in Thor: God of Thunder gives us AAA talent that will create a truly cinematic interactive experience,” said Gary Knight, Senior Vice President of Marketing at SEGA Europe and SEGA of America. “Mighty Thor and the trickster Loki will face off with real emotion while giving fans visual and vocal continuity between the video game and film adaptations of the Marvel franchise.”

Thor: God of Thunder will take players through an original, epic-scale third-person action adventure for which Matt Fraction, the Eisner Award-winning writer and leadThor comic book author, served as story consultant. In the game, Thor battles through the numerous worlds of Norse mythology to save Asgard. Players will wield the iconic Mjölnir, Thor’s legendary hammer, to fight enemies of an immense scale while controlling the elemental storm powers of lightning, thunder and wind to vanquish enemies. Thor must overcome monstrous foes lifted from the pages of the comics, including Ulik, Ymir and Surtur, as well as other daunting enemies.

Thor: God of Thunder is scheduled for release spring 2011 on all major video game platforms.

Australian actor Chris Hemsworth played George Kirk in the 2009 Star Trek film before portraying the title role in Marvel Studios’ Thor film and SEGA’s upcoming game, and he will pick up the hammer once more in 2012 for Marvel Studios’ The Avengers. He has also appeared in a variety of TV roles and in films such as A Perfect Getaway,Ca$h and more.

Tom Hiddleston graduated from the Royal Academy of Dramatic Art and has gone on to star in a number of critically acclaimed television productions including Return to Cranford and Wallander.  He has also received universal praise on stage in a number of roles including a hugely successful production of Shakespeare’s Othello alongside Chiwetel Ejiofor and Ewan McGregor, and an Olivier Award-winning performance in Cymbeline.  In addition to voicing the role of Loki in Thor: God of Thunder, he plays Loki in the upcoming Thor film adaptation from Marvel Studios and in 2011 will also star in Woody Allen’s Midnight in Paris and Steven Spielberg’s War Horse.