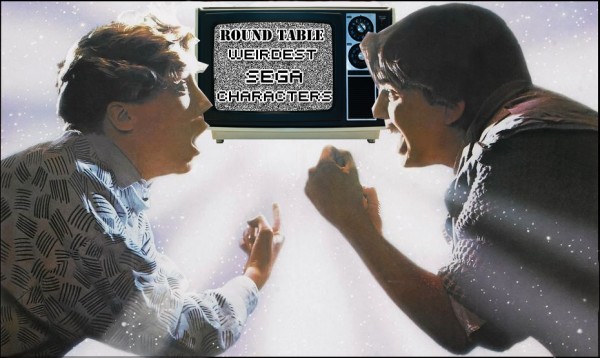 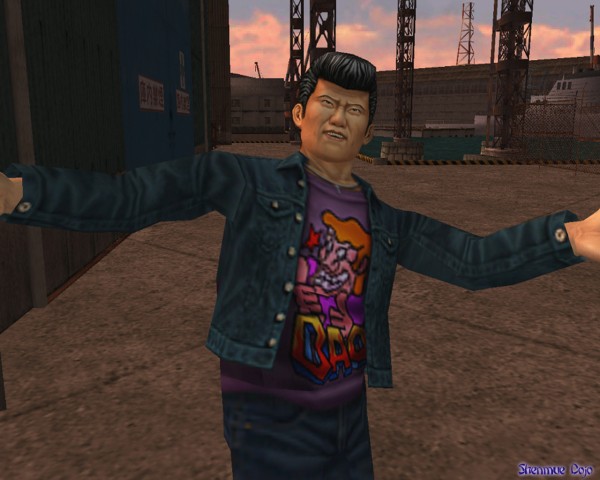 Imagine it’s October 2000 and you’ve read all the articles and seen all the trailers for the upcoming game Shenmue. In your mind, what was to come would be an emotional tale of murder and revenge set in a living, breathing world. It would be truly magical. Now jump ahead a month to the english language version’s release. You’re playing for a bit, so far it is just as the media campaign had promised. Suddenly, out of nowhere, comes the Shenmue equivalent of Jar Jar Binks. A hopped up Japanese dude with a greaser pompadour, a wild purple shirt and denim outfit complimented by bizzare motions and his very own wacky theme tune. At this point you’re thinking: now that hot dog stand dude doesn’t seem so crazy.

Goro could be called the anti-Ryo, as being the same age as Shenmue’s hero is about the only similarity between the two. Goro was loud, brash, violent and in love. Like Ryo, Goro was not in high school. However unlike Ryo, Goro didn’t make the decision on his own. He was expelled. A lack of schooling and morals led to Goro making his living at the harbor, under the name of “Harbor Goro”. Rather than making a decent living off of forklift driving, Goro suckered money out of locals through extortion. 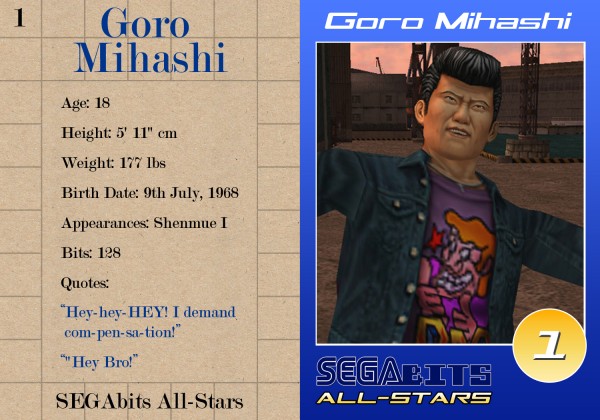 [First image when you google his name. Wow!]

Goro was first encountered as an enemy, but after being easily overpowered by Ryo, Goro started to show his friendly side. As the story of Shenmue continued, it was revealed that Goro wasn’t such a bad guy after all! He got Ryo a job as a forklift driver and even gave Ryo advice about the Mad Angels. “Don’t say that name so loud, bro!” As Goro’s story drew to a close, we found out that not only was he in love with a local girl, but that he planned to marry her and have enough children to form his own baseball team! (Note: Before anybody calls me out, that Goro bio was pulled from my very own article written a year ago).

Despite his high levels of wackiness, Goro was a welcome addition to the cast. Up until his introduction, characters had been stoic, dull and plain old boring. Now comes the new NPC on the block, and he wasn’t afraid to dance, yell and even announce that he had to take a leak. Until next week, bro! See ya’! 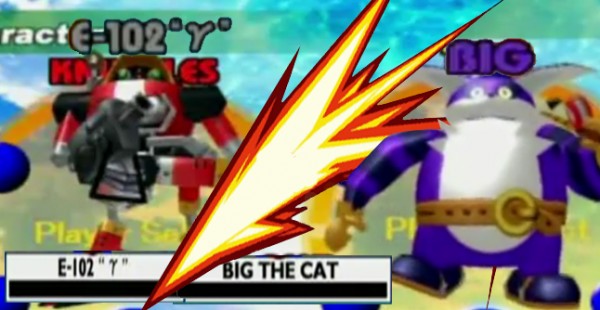 I’m sorry, I know we are supposed to pick just one character but these 2 are pretty weird and I didn’t want to discriminate between the two. I don’t know how they made their way into the Sonic universe except maybe because Naka San’s creative juices were flowing all over the place during the Dreamcast era (I mean come on; how do you release Chu Chu Rocket, Sonic Adventure, Samba De Amigo, and Phantasy Star Online in the brief period of 18 months – not to mention that 3/4 games received sequel/updates within this frame).

In 1999 Sonic made his true 3D debut (in a game made by Sonic Team) and aside from the camera issues that plagued Sonic games in the last generation, it was safe to say it was perfect.

Featuring 6.5 playable characters (.5 for chaos). Sonic was ready to take you on the fastest roller coaster ride you’d ever been in, Tails for taking the roller coaster into the air, Knuckles to explore in detail those lavish beautiful levels that Sonic & Tails rushed through, and finally Amy just to show how much better Sonic speed platforming can be compared to the traditional slow paced ones.

These 4 would’ve been enough to seal the deal and make the game perfect but Sonic Team didn’t just go the extra mile, they took an extra leap by offering 2 more very bizarre playable characters that no one could’ve imagined could have a role in the Sonic Universe. 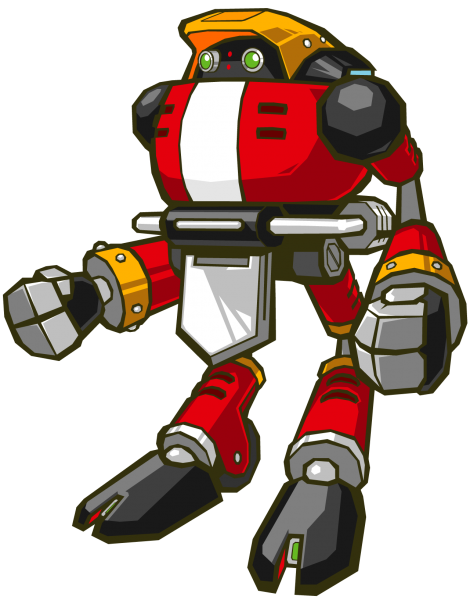 E-102 Gamma: For the first time, before the Dark & Hero trend started by the sequel, you got to play with one of Robotnik’s minions (or pawn maybe), a Robot built around the soul of a bird (just like all other robots back in the day had animals inside them) who disobeys Robotnik’s orders by freeing Amy Rose from Robotnik’s jail. His story is a deep and thought provoking one which surprisingly took me a few years to understand. I would categorize him as a Sonic character that used a gun (move over Shadow the Hedgehog) and what’s more, his gun-play was a hell of a lot more enjoyable than Shadow. I don’t know why Sonic Team didn’t use the E-102 style gameplay for Shadow the Hedgehog but that is another story for another time. 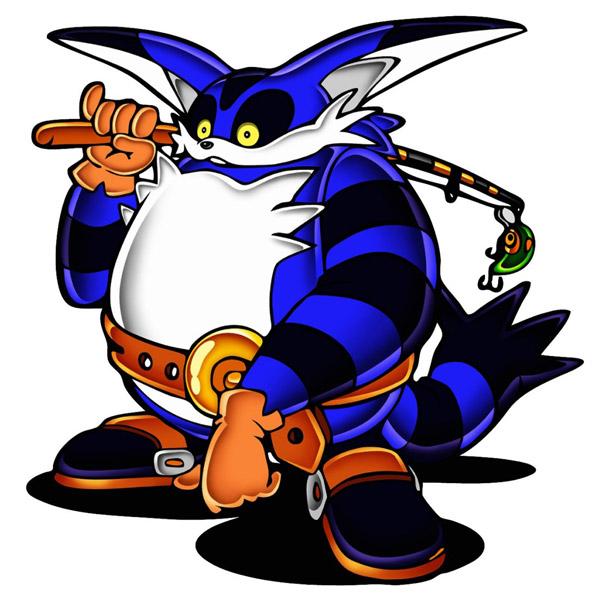 Lastly, Big the F%$#!%G Cat: E-102 is just a special mention but Big takes the cake for everything that’s weird even for a game that features a blue talking hedgehog.

His story is as bizarre as everything else about him, he is a cat with a pet frog that somehow swallows a Chaos Emerald and starts running through all the stages with Robotnik and Big chasing after him. Every stage involves Big fishing the cursed “Froggy” out only for him to slip out and run away immediately after.

With Big the entire stage is centered around a pool of water (lakes, ice caps, ponds, swimming pools etc) where he just throws his fishing rod and starts fishing. E-102’s gameplay mechanics were obviously very different from the core Sonic characters but he still made it through the same levels (with some changes in the level design). Big this Cat is completely living in his own world and he might as well have received his own game.

I personally loathed Big, I don’t want to go fishing in a Sonic game. I want to run through stages trashing robots, but the older people in my household (like my dad) who otherwise loath video games really loved fishing with this guy. I don’t know, go figure. 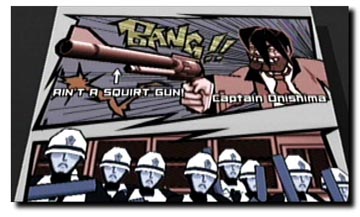 My choice would be Jet Grind Radio’s Captain Onimisha. He devotes seemingly his entire life to fighting vandalism in Tokyo-to, and will go to any length to stop it. This includes sending the military onto the city’s main street, equipped with tanks and tear gas, along with machine gun-equipped choppers, combat dogs, and, of course, he himself.

Few villains amplify this type of obsessive craziness, and few are given such free reign as Captain Onimisha clearly has been given, and it’s all played for laughs.

Over the top, powerful, hilarious, and completely out of his mind…all the right ingredients for one of SEGA’s weirdest characters. 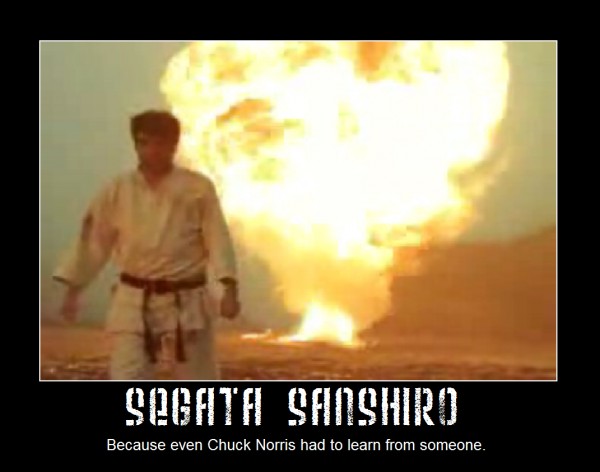 [Blow something up, don’t bother looking at the explosion]

A long time ago, when I first got a PC I was really into watching older SEGA ads. It’s weird really, but I just love old adverts; I first ran into Segata Sanshiro adverts by accident. I didn’t know if it was real or some joke, I would later find out that it was no joke at all.

The first advert I saw was the one with the kids going to go play baseball (see ad here), but they are stopped by Segata Sanshiro. The oddest part of the ad is when the kid runs right into him and falls, he looks and acts like he knows him by name. Like he has been doing this to other kids in the neighborhood. Which most likely he has. 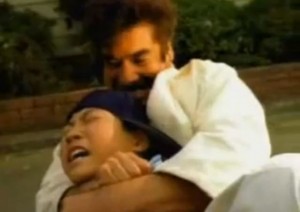 [Don’t mind him, this is how business is done in Japan]

He goes on to beat the living shit out of the three kids, their only crime is going out to play a sport and not sitting at home playing video games. Segata beats the shit out of him like they just insulted his mother, then advertises his product, SEGA Saturn and Sonic R. Really?

I’m sorry, but you have to have some really odd writers that think this is how you sell a product to parents. Yes, an advert that shows a karate man beating kids. Guess what?  It’s totally weird and brilliant.