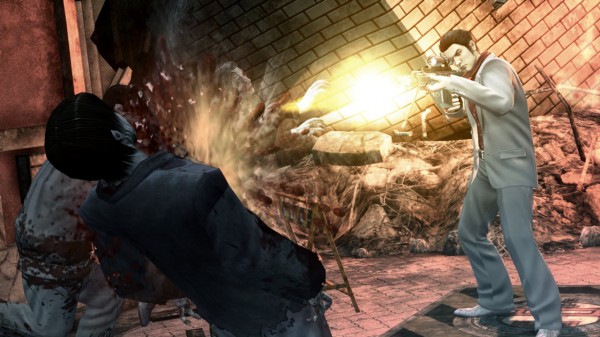 Yakuza of the End was supposed to be released in March, but a huge earthquake and tsunami devastated Japan. You probably heard of it. What is SEGA to do? Release a game where zombies attack Japan and leave everything destroyed while actual tragedy has hit Japan?

SEGA did the right thing and delayed the game. Some people thought the game was going to join 2001’s Propeller Arena (a AM2 DC game not released because of 9/11) and never come out. Well it is, June 9th. Few changes, some of the profits from the game will go to help Japan and the first print has a sticker that says “Ryu ga Gotoku Ganbaro, Nippon!”

Ganbaro means to stay strong and Nippon translates to land of the rising sun, a nickname for Japan.

Get drunk on some Yakuza of the End liquor

Daisuke Sato: “If SEGA localizes, there would be new controls”
Japan PS3 Release Date Yakuza of the End