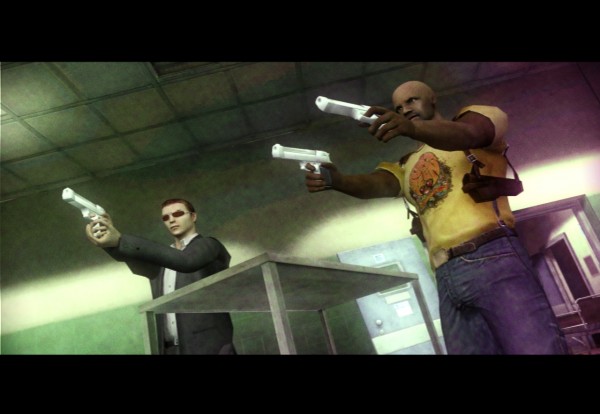 There had always been a degree of campiness to the HOTD series, as the bad voice acting, awful dialogue, and over the top action scenes have, from the start, come with the territory. I have to say, I’m still not entirely sure whether the numbered HOTD games were originally meant to be funny or whether their humor was the result of a classically bad English dub; I think a case could be made either way. Regardless, it made perfect sense to then develop a House of the Dead game that’s, from the start, determined to go so over the top that there’s just no way back down.

What I think worked about HOTD: Overkill was that it created some truly laugh-out-loud cutscenes between its levels, cutscenes that thrived on its two main characters, Special Agent G and Detective Isaac Washington. Though the F-bomb use was a bit excessive at times, this was made up for by the great dynamic between these two very mismatched characters, not to mention the constantly funny violence. Even the menus were given a retro theme, with the game letting you know immediately exactly what you were in for.

This hilarious new grindhouse-style presentation, including some great songs during the menus, coupled with the series’ traditionally fun lightgun gameplay and voice acting that nailed the intended atmosphere perfectly, were all the ingredients necessary for a fun rail shooter that I wish we’d see a sequel to. It’s clear that the developers had a blast making this game, something that translated well to the player. If you’re looking for a great and truly hilarious lightgun co-op experience, look no further. 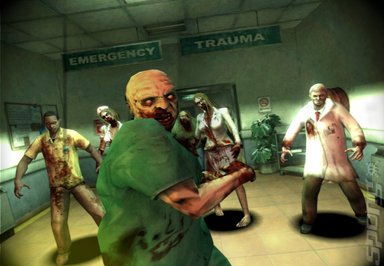 What I’d do for a sequel is, first and foremost, fix the framerate. Framerate’s always an interesting topic because while a sluggish framerate is prominently mentioned in most reviews of games that struggle with it, I feel it’s something that gamers, well, either notice or they don’t. House of the Dead: Overkill featured what I felt was such a distractingly bad framerate that it was one of those rare instances where it detracted noticeably from the experience. It was hard to shoot these zombies with precision when the game seemed to stutter every time the camera moved, a problem made worse when things got really crazy onscreen. I tend to look at games with a critical eye, though, so I often notice a poor framerate. I decided not to say anything to my friends about it while we were playing it just to see if they would notice, and sure enough, they all asked why the game seemed to pause in its tracks so frequently. Definitely a big thing that I’d love to see improved for a sequel, especially after playing the silky smooth (and much better-looking) Resident Evil: Darkside Chronicles on the same system.

One thing we also all agreed upon was that the game was far too easy. Some of the bosses were pretty inventive but none of them struck us as even remotely challenging. Rail shooters are by nature a pick-up-and-play genre, probably one of the most accessible in the industry, so the decrease in difficulty from previous installments definitely struck me as unnecessary. Of course, you can unlock harder modes upon completion of the game, but then you’ve beaten the game already and it’s never as fun watching a grindhouse movie the second time, even with the addition of some new content. Harder difficulties should be made available from the start, or if not, the Normal difficulty should then be made more challenging.

Game length’s another big one. House of the Dead: Overkill, while not the shortest rail shooter, clocked in at under the 5-hour mark. Headstrong Games could easily have provided us with a few more levels, which is a compliment more than anything; they’ve developed a game so fun that I didn’t want to see it end, but the end unfortunately arrives rather quickly. An online mode would also help extend replay value. 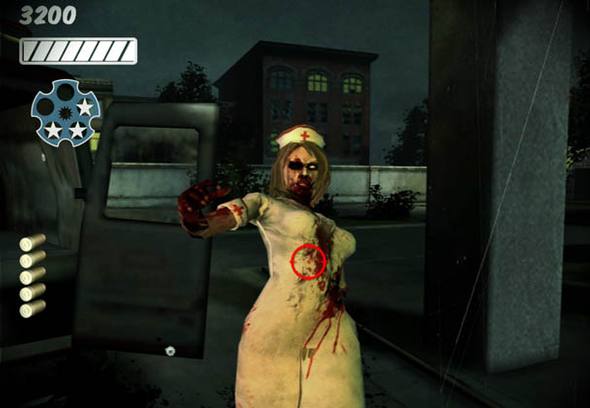 All in all, House of the Dead: Overkill was a pretty cool experiment with an established IP, and though it wasn’t without its faults, these are things that can easily be fixed in a sequel. My sequel would offer a bit more content in the main game, a harder difficulty available at the start, an improved framerate, and some online play. It would yet again feature a crazy story with entertaining characters and lots of violence and language (though maybe slightly less of the latter) for us to sink our teeth into. SEGA has gone on record and called House of the Dead: Overkill a success sales-wise, so there’s really no reason we shouldn’t get a sequel.

Agree? Disagree? Have your own ideas? Leave ’em in the comments section below.