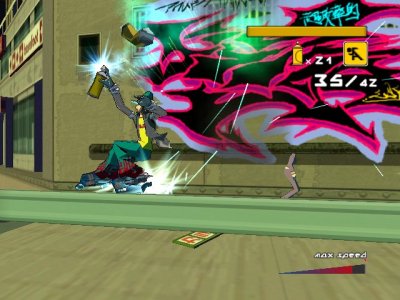 Looking back, I’m not sure why Smilebit chose to switch things up so much for Jet Set Radio Future. Granted, I don’t have access to sales figures for the original game, but it was critically-acclaimed, got great feedback from people who played it, and obviously did well enough for a sequel to be green-lit. The scene was set for another arcade-style tagging romp through Tokyo-to, but Smilebit chose to do something risky; they decided to make their second Jet Set game a reboot instead of a sequel.

The soundtrack continued in the same vein as its predecessor’s, it kept the same cel shaded visuals, (though they were upgraded significantly) and it featured a lot of returning characters, but that was about it. The timer was eliminated entirely, as was the analog stick spray painting system, which was instead replaced with a single trigger click. This alone created a substantial change to the sequel’s gameplay. No longer was the game centered around hectic spray-painting sessions, with you racing through the streets as you faught a time limit and pursuing cops. Instead, Jet Set Radio Future took a more freeroaming approach. Levels that originally were meant to be completed in under 10 minutes were now designed to stretch out for over 30, sometimes even hours. Hidden characters were now scattered throughout the stages, with you encouraged to search them out, and police only went after you in scripted boss battles and closed-in confrontations. The pacing could only be described as more….relaxed, and this freeroaming nature applied to every aspect of the game. A series of menus no longer took you to levels or to new characters, with you now having to skate through levels to get to other levels, much like exploring a full city. No longer rewarded with a Professor K cutscene after each level, JSRF often had you go from one level to another without the narrative moving forward, blurring the line between when one mission ended and another one began. 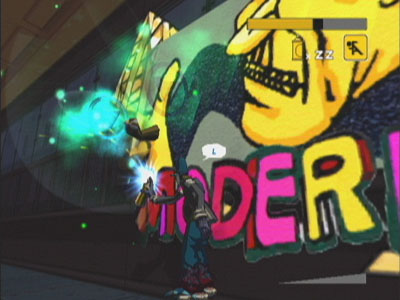 It’s interesting to think about why Smilebit chose to switch up the formula to such a degree. I imagine that there are some studios out there who are so ambitious that they just can’t stand the idea of making the same game again, or even a game that’s remotely similar. I wonder if that was Smilebit’s mentality for developing JSRF, or if it was instead a decision driven by the decrease in popularity of arcade games. Jet Grind Radio was never an arcade game, but it was developed with a very arcade-style pace, something the sequel lacked to a pretty shocking degree. I can’t even cite GTA3 as a possible influence for the change, since the games released too closely to each other for that to have been a possibility, so exactly why Smilebit chose to take such a sharp turn away from the original game for its sequel is pretty much a mystery. What I do know for sure, though, is that it created a scenario where we ended up with a sequel that was an entirely different experience from the original. For better or for worse, I never felt when playing JSRF that I had ever played anything like it before, and that’s definitely an achievement, especially since it came out not even two years after the original game.

Did the risk pay off?

It wouldn’t be a risk without the possibility of it backfiring, and so the question is, did JSRF’s changes make the experience better or worse? For me, it’s a bit of a toss up. There’s no question that I prefer the original Jet Set Radio for a number of reasons. I thought the gameplay was much faster, the story more interesting, the level design much less likely to be your enemy, and overall, the energy level to be higher. Jet Set Radio Future’s change in direction wasn’t without its benefits though, including a much longer game length, a city that felt more like a city and less like a series of levels, and greater level variety. Plus, the game was still incredibly fun to play. On the other hand, though, every time I replay the game and wind up helplessly lost in the Skyscraper District, hours having gone by, I find myself feeling the loss of the original game’s time limit and the short levels to match it.

I should be clear, though, that it’s not my intention to bash Jet Set Radio Future. Smilebit took huge risks, and while I don’t personally think they created a game on par with its predecessor, it was refreshing to have two very different games as part of the same series; two very different experiences, each one compelling in its own right. The first game was unlike any I had ever played before, and, lo’ and behold, the second game was also unlike anything I had ever played before. How often does that happen?

Comments? Which Jet Set game did you prefer? Feel free to leave ’em below.