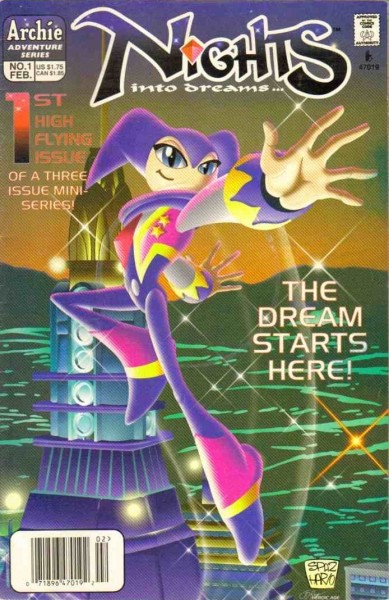 While the Saturn hit the US in 1995, it wasn’t until late 1997 that I bought a system. A large part of why I held out was money, $399 is a fortune to an 11 year old. Also, I was having way too much fun with my Genesis at the time, a testament to the quality of the 16-bit system. The Genesis had everything I wanted: Sonic the Hedgehog and Disney Interactive games. The Saturn had a Sonic compilation of games I already owned and some goofy jester game. At the time I was oblivious to the fact that NiGHTS was a Sonic Team game (no Wikipedias or SEGAbits back in 1995, kids) and so I went on ignoring one of the greatest games and systems of the mid-90’s.

During Christmas, 1996 I had my first chance to play NiGHTS on a Saturn store kiosk similar to the one Michael Jackson’s estate had up for auction. Long story short, it blew me away and I had to have it. Fast forward to January 1998, I was still strapped for cash but could afford the occasional action figure and comic book. I was a hardcore Sonic the Hedgehog Archie Comics collector, with a subscription assuring every issue would come right to my door. Promos began to appear in the Sonic comics for a new SEGA mini-series titled NiGHTS into Dreams, and if that wasn’t exciting enough I also learned it would be drawn by the greatest Sonic artist the US had to offer: SPAZ!

Patrick “SPAZ” Spaziante was the longtime cover artist for the Sonic comics. SPAZ’s cover work was an experience in itself, sometimes outshining the story contained within an issue. Hell, the man has his own gallery at Sonic HQ. Suffice to say, if you bought a Sonic comic just for SPAZ’s art, then imagine an entire mini-series done by the man!

February 1998 came and the first issue arrived. In hindsight, the NiGHTS mini-series greatly expanded on the plot of the game. The comic began by introducing a blacksmith, driven by his dreams to create a gleaming golden spire (the same spire seen on the game cover and menu screen!). Little did the smith know that he was being controlled by Wizeman the Wicked to create a spire identical to one found in Nightopia, the land of dreams. NiGHTS and Reala are introduced as lackeys of Wizeman (!) who have just captured the two dreamers of the real world who only appear once every century, these being two kids of the 1800’s. 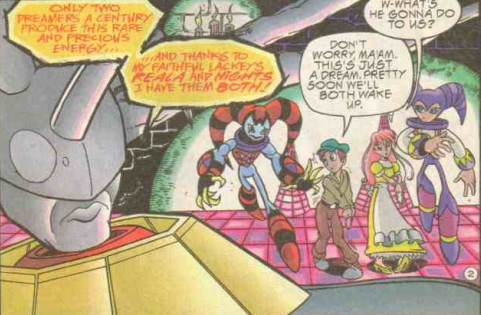 NiGHTS is quickly swayed by the young girl to go turncoat on Wizeman, as he flies off with the red dream power spheres. While fleeing, he runs into some Chao- er, I mean Nightopians, who prompt him to cram the spheres into the dream hole to reality (sounds nasty, I know). A shard of dream sphere comes loose and embeds itself into NiGHTS chest, I’m sure that plot point won’t come into play during the final issue *wink-wink*. Meanwhile, the two spheres fly out of the blacksmith’s spire and embed themselves into the ground outside. In a moment of inspiration, the smith describes what he saw and gives a name to the town which will someday develop from that plot of land: Twin Seeds! Thank goodness he didn’t name it Two Balls. Fast forward 100 years, Two Balls has developed into a thriving metropolis. The pinnacle of the city is a large skyscraper topped off with the blacksmith’s spire. Two Nightopians emerge from the spire in search of the two dreamers. In a “small world” moment, both dreamers are found within seconds of eatchother: Elliot and Claris. Elliot is late for basketball practice, and what’s worse he is quickly schooled by a Draco Malfoy-like tit named Roger. 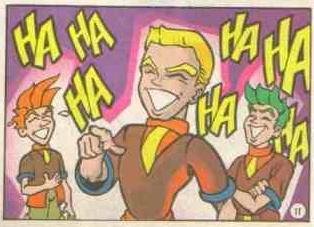 Elliot is quickly beaten down with laughter and insults, but is distracted by beautiful music. He finds the source of the music, a music school, and climbs up to get a view into the window. Why it’s the other dreamer, Claris Sinclair! Elliot’s voyerism doesn’t last long, as he is scared shitless by a Nightopian. Claris is distraced by Elliot and is derided by her beachball-like music teacher for lacking focus. It would seem both dreamers are having trouble acheiving their… dreams? 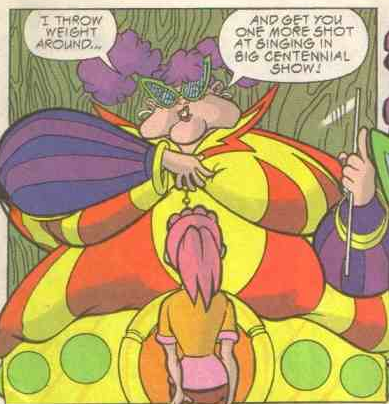 After surviving a three story fall, Elliot quickly accepts that magical fairies exist and is convinced to fall asleep to enter Nightopia. As Elliot isn’t sleepy, they could wait until evening when Elliot is sleepy. I reccomend taking some Benedryl- 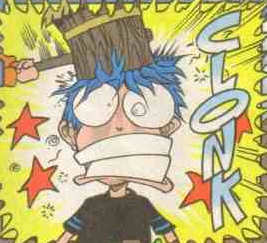 Or give Elliot a concussion, that works too. Entering the land of dreams, the Nightmaren introduces Elliot to the Ideya Palaces (those little four pillar checkpoints that hold NiGHTS in the games). It is revealed that NiGHTS exists as even less than a dream, as he was imprisoned by Wizeman for rebelling. The only way to awake NiGHTS is for a real world dreamer to enter the Ideya Palace. Elliot is quick to enter and becomes NiGHTS, triggering the alarms to Wizeman that NiGHTS has escaped. Wizeman dispatches Gillwing (the first NiGHTS boss) and in a very Wizard of Oz moment invades Claris’s dreams, turning her music teacher into the evil Puffy. Sensing that Claris is in danger, NiGHTS leaves Elliot and fuses with Claris, defeating Puffy. 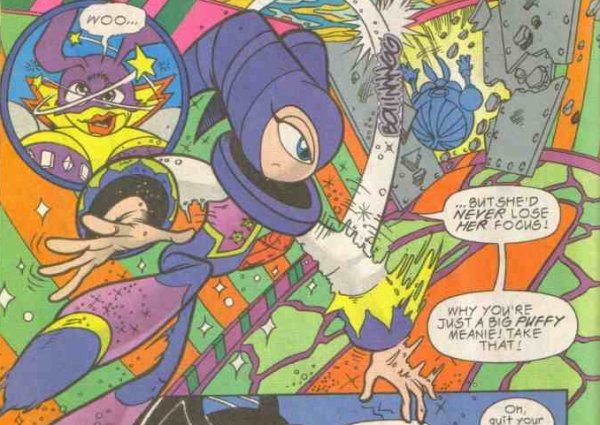 Meanwhile, Elliot uses the floating alarm clock (usually something you’d avoid in the games) to his advantage as he wakes himself up before Gillwing can lay a finishing blow. As the issue comes to a close, all is well… for now! While Claris and Elliot have sweet dreams, Draco Malfoy is introduced to the nightmaren known as Reala. DUN-DUN-DUNN! Check out my critique of issue two here, sadly I was too lazy to write about the third issue. But perhaps the final week of Saturn Month will give me that extra bit of motivation to do so! Say tuned… or not.

Celebrate the Dreamcast’s 12th Birthday With Us!

Is that a SEGA arcade in your pocket?

One response to “NiGHTS into Dreams into Comics – Issue 1”