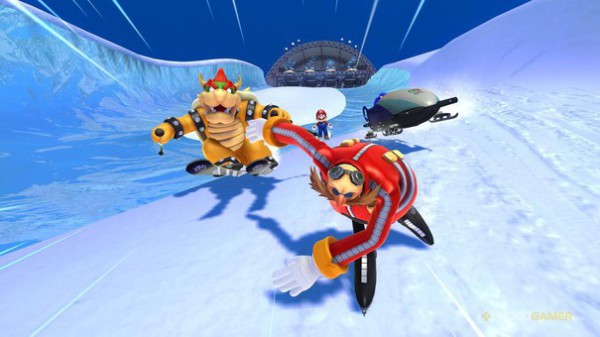 The Mario and Sonic Olympic titles have been VERY successful for Sega and Nintendo. I mean who doesn’t love to see Mario and Sonic, once the most bitter rivals of the 90’s console wars compete together? While the dream events have always been fun, the main problem with this series has been the regular Olympic events themselves. They’re bland. Vanilla. Just plain…..”Meh”. What this series needs is some good, solid game mechanics. Does Mario and Sonic at the 2014 Sochi Winter Olympics finally solve this problem? Eeeeh….maybe. Read on.

While playing the three available events in the E3 demo, it becomes very apparent that there have been some improvements made. The most obvious being the graphics. Now that it’s on a “next gen” system, the details on the characters are sharper than ever. Also, there are many more details in the backgrounds. In one event you can see the villages in the horizon while a train is passing by as you ski. It looks very pretty. However, it’s no Mario Kart 8. The lighting isn’t nearly as good and it currently runs at what seems to be a sub-30 FPS. You can forgive this a bit because it’s probably on a smaller budget and team than a big game like Mario Kart, but the frame rate really needs work. 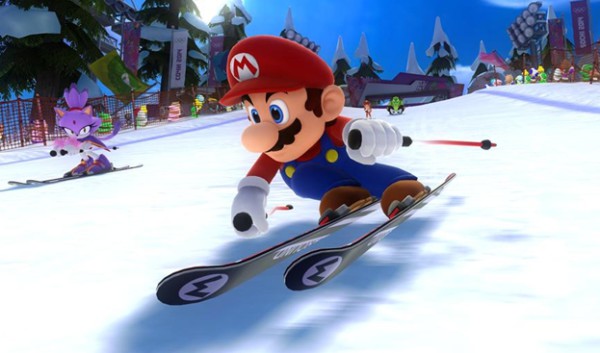 The biggest improvements made are the mechanics. It’s feels more like a proper character driven sports game than trying to outright simulate an event for the most part. The best example of this is the most basic event, skiing. They gave basic skiing a kart racing feel to it now. Besides just turning down the slalom, you can do tight “drift-like” turns that build up boost. You can hit the flags for an extra burst of speed as well. When you hit ramps, flick your gamepad up for an extra jump boost. While in the air, you can shift your weight for a proper landing Excitebike style. It’s these kind of fun mechanics to a basic competition that make it a much more enjoyable game.

The second event was bobsled racing. Nothing much you can do here to improve it, but they do add a nice new feature. As you’re racing down the track and aiming for boost arrows, you instantly have two different views available to you. The TV screen shows from just behind the bobsled and the screen on the gamepad shows a much closer view right behind the hood. You steer with the gyro sensor which, in this particular case makes the most sense. Having two simultaneous screen options available to you is pretty dang cool. I’d love to see that in future racing games. 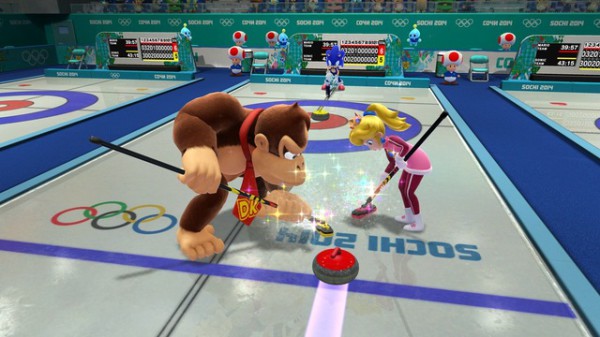 The third and final event of the demo was a dream event combining skiing, bobsledding and snowboarding into one. You start out as Mario skiing down the hill in a course that looks similar to Holoska (I don’t believe it is though) and get to a gated area with several doors to pass through. Depending on which door you pass, you can either get ski’s, a bobsled, ice skates or a snowboard. Which one you get effects how you play. The controls on skiing and snowboarding are similar. Try to stay on the snow part of the course and not the ice to gain the most speed. There are ramps and boosts galore but turning can be tricky if you’re going too fast. The bobsled is the same, only you have to stay on the ice to go the fastest and hitting snow really slows you down. I’m sorry to say I never passed through a gate with ice skates so I can’t comment on that. There are several gates to go through on this course so you can try almost everything in one go if you wish. It’s fun, but I’ve played better dream events before.

All in all, the 4th Mario and Sonic game in the series seems like an improvement but with only three events to go on, it’s kinda hard to tell at this point. We’ll have to see as more events and details are shown later this year. Mario and Sonic at the 2014 Sochi Winter Olympics arrives in early 2014.

4 responses to “E3: Hands-on Mario and Sonic at the 2014 Sochi Winter Olympics”