SEGA Japan have just announced another Yakuza title, this one seems to be a spin-off titled Ryu Ga Gotoku (Yakuza in the West) Ishin. The only information we have is the logo and the image below, which reminds me of Yakuza: Kenzan, a spin-off on Playstation 3 that never made it over.

What platform is this being developed for? That we don’t know either, but since Nagoshi has stated before that Yakuza 5 was going to be his last Playstation 3 game, don’t be shocked that its SEGA’s first Playstation 4 title.  Guesses on Neo-GAF is that Ryu will be portraying the life of Sakamoto Ryōma. 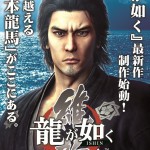 Yakuza Ishin is the Number One PS4 game in Japan