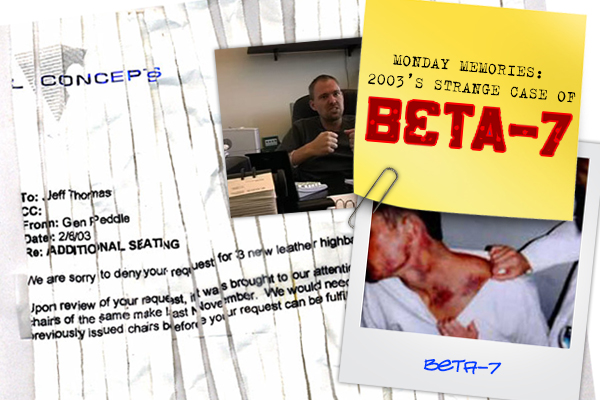 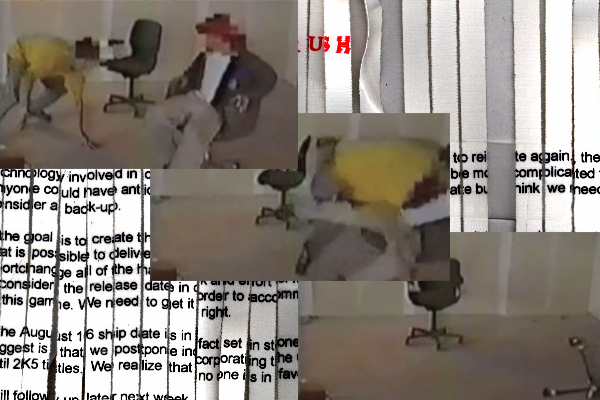 It was this first blackout that lead to Beta-7 creating his own blog, in an attempt to find out the truth behind this and many future blackouts experienced. As the blackouts continued, Beta-7 discovered bruising on his body and would wake up in places that were different from where he remembered being before. Was SEGA’s “crash-cam” to blame? As weeks passed, Beta-7 learned that other beta testers had experienced similar blackouts. Through security footage and an inside source, known only as “Beta-X”, it was discovered that during these blackouts individuals would violently tackle those nearby. Beta-7 and others questioned the developers, and Beta-7’s friends even went so far as to scavenge through Visual Concepts company trash in an effort to find documentation. 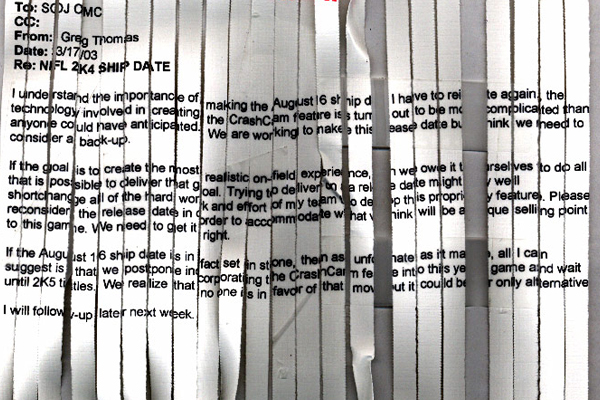 Amazingly, through pieced together shredded e-mails it was discovered that there were internal discussions at Visual Concepts regarding the “crash-cam” feature. There were concerns that the feature was “more complicated than anyone could have anticipated” and that the game would have to remove the feature, risking a delay of the game. Things came to a head when Beta-X contacted Beta-7 with an unaired ad which featured a title card promising that video game playing does not lead to “violent or erratic behavior”. SEGA and Visual Concepts knew something was wrong with the “crash-cam” feature, and according to Beta-X something big was going down in San Francisco that Beta-7 had to be there to see. Beta-7’s final blog entry was an update stating that he was getting ready to fly out to San Francisco to meet with Beta-13, another blackout sufferer, and the mysterious Beta-X. 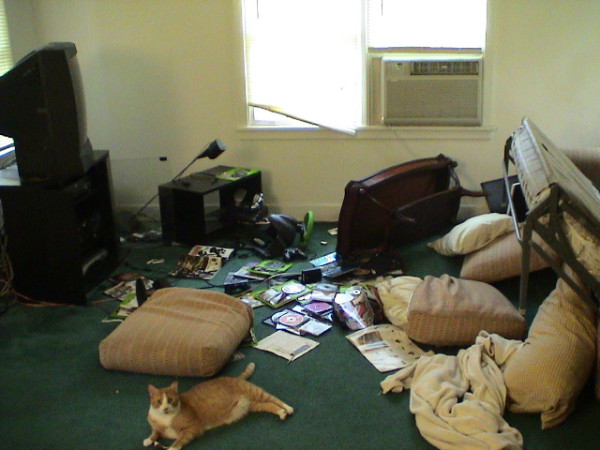 Beta-7 was not heard from again, and subsequent blog entries, written by Beta-7’s friend Rob, revealed that Beta-7 had never contacted his friend upon arriving in San Francisco. Beta-7’s apartment had been ransacked, with his CPU, game consoles, and file folders stolen. Had Beta-7 done this to throw others off his trail? Or perhaps, SEGA knew Beta-7 was onto them and got to him before the flight to San Francisco could ever take place. Whatever the answer, the strange case of Beta-7 is an unreal tale from SEGA’s past. An unreal tale because… it wasn’t real at all.

“…the marketing team created a video game fan who turned from a beta testing hopeful to an unfortunate lab rat.”

The Beta-7 story was an elaborate marketing campaign dreamed up by the New York advertising firm Wieden + Kennedy and The Blair Witch Project filmmakers Chelsea Pictures directing group Haxan. Through fake forum posts leading up to the Beta-7 blog, the marketing team created a video game fan who turned from a beta testing hopeful to an unfortunate lab rat experiencing mysterious side effects. Websites, security camera videos, voicemails, e-mails, classified ads and many more elements were created to tell the story, with blog posts appearing in real-time. At the time, several websites and gamers fell for the story, with the fake websites created by Wieden + Kennedy accumulating more than 2 million hits. SEGA’s sales of the game reportedly exceeded projections by 20%, despite real-life delays which were not caused by the Beta-7 incident. The campaign won several awards, including a Grand CLIO award, a gold Pencil at The One Show Interactive, and a “Big Idea chair” at the Andys.

Whether or not you remember the Beta-7 campaign, it is truly one of SEGA’s craziest and most elaborate attempts at promoting a game, and proof that SEGA still had inventive tricks up their sleeves after the demise of the Dreamcast. Following the campaign, Wieden + Kennedy dropped SEGA as a client due to what they described as “conflicts”. It is unknown what these conflicts were, but if you ask me I think there may have been a bit of truth to the Beta-7 story.

Get wrapped up in the Beta-7 story yourself, the Beta-7 blog is still active despite being over ten years old: http://www.beta-7.com/

We’ve also uploaded a case study video from Wieden + Kennedy, which can be viewed on our YouTube channel.

What are your thoughts on the Beta-7 campaign? Sound off in the comments section below.