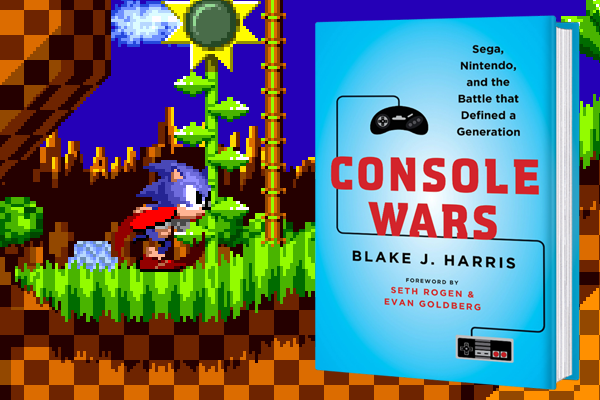 Thanks to It Books, HarperCollins Publishers, and author Blake J. Harris, we have an exclusive excerpt from “Console Wars: Sega, Nintendo, and the Battle that Defined a Generation” which features the first time SEGA of America President Tom Kalinske and his staff laid their eyes on Sonic the Hedgehog in action! The full excerpt can be found after the break, and if you like what you read, make sure to pre-order a copy of the book today and enter our Twitter and Facebook contests to win a copy of the book. Contest winners will be announced on our release day podcast with the book’s author Blake J. Harris, which will debut alongside the book tomorrow!

It is a rare thing for five smart, skeptical adults to be so awed that in unison, their jaws drop in astonishment. But what Kalinske, Rioux, Toyoda, Nilsen, and Schroeder were staring at in the conference room was quite possibly the most extraordinary thing they’d ever seen: an early, incomplete, minute-long demo for Sonic The Hedgehog. The game was so fast, so exhilarating,

and so unlike anything they’d ever seen before that their facial responses hardly did it justice.

“A work of art,” Schroeder chimed in.

They looked to Nilsen, their resident gamer, for his assessment. “Eh, it’s okay,” Nilsen said, drawing blank stares from his colleagues. “Actually, wait, that didn’t sound right. Can I borrow someone’s sarcasm? Mine doesn’t seem to be up to snuff.”

The five of them, like bank robbers who had just completed an unbelievable heist, continued to stare at the game and allow themselves to indulge in a series of what-ifs. What if Sega could change the way videogames were played and perceived? What if they could take off the gloves, pound their chests, and declare war? What if they could actually go after Nintendo?

When Kalinske returned from New Orleans, this was exactly the kind of fearless ambition he wanted his team to harbor as he prepared for his big trip to Japan. The employees now admired him; he was smart, approachable, and inspiring. He was a man obsessed with competitive advantages, and soon enough, that kind of strategic thinking became infectious.

Between his vision, Rioux’s meticulous day-to- day management of operations, and

Toyoda’s constant efforts to protect America from Japan, the what-ifs began bubbling inside Sega’s employees. But to fully believe, they needed something to see, and that’s what Sonic The Hedgehog was: proof of possibility.

“This is it,” Kalinske said, fixated on Sonic, their beloved blue hedgehog, who somehow managed to come across as both rebellious and adorable. This was the character who would embody the Sega spirit and give them a puncher’s chance against Nintendo’s 16-bit

machine. “We need everyone to see this,” Kalinske proclaimed, and then stuck his head out the door and invited everyone in the office to check it out.

The Sega of America employees gathered around the television set and had the same reaction that had just occurred in the five who’d first seen it.

“Holy crap,” said another. “We’re going to sell a million of these, aren’t we?”

It was, of course, intended to be nothing more than a rhetorical comment, but the idea of having something that a million people would want to buy sent Kalinske’s mind into overdrive. The combination of seeing this game, Sega’s new Buster-ized attitude, and the fact that more great software was on its way (both internally and from Electronic Arts) led him to what

he believed was a game-changing realization.

“No, we’re not,” Kalinske said. “We’re not going to sell a single one of these. And that’s exactly what I’m going to tell Japan.”

One response to “Exclusive Excerpt from “Console Wars”: SEGA of America’s first look at Sonic the Hedgehog”