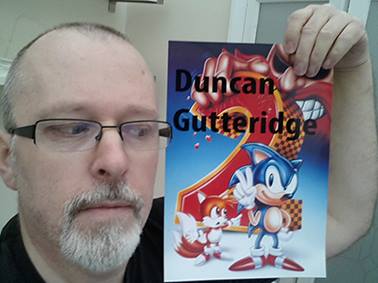 Upcoming UK Sonic convention Weston Super Sonic has announced another guest, this time in the form of Duncan Gutteridge!

Duncan’s work for Sonic goes as far back as 1993, as he illustrated every single piece of artwork in the official Sonic the Hedgehog calendar for that year; this artwork was later used in various pieces of Sonic merchandise throughout the 90s, and it’s now rather iconic! If that wasn’t awesome enough, he’s also the man behind the cover art for the SEGA Mega Drive hit, Streets of Rage II!

This guest announcement is the latest in along line of amazing reveals: Weston Super Sonic previously announced that fellow Sonic the Comic legends Richard Elson, Nigel Kitching, Carl Flint and Ferran Rodriguez will also be in attendance, and that Mike Pollock, the voice of the nefarious Dr Eggman, will be conducting a live Skype Q&A at the event. There’s also activities like speedrun tournaments and art contests taking place during the day!

The event has already been successful, as all of tickets have sold out! However, don’t fear if you can’t make it, as SEGABits will be there, and provide impressions of the day!

Plenty of details are available on the official Weston Super Sonic website, for those who do plan to go!