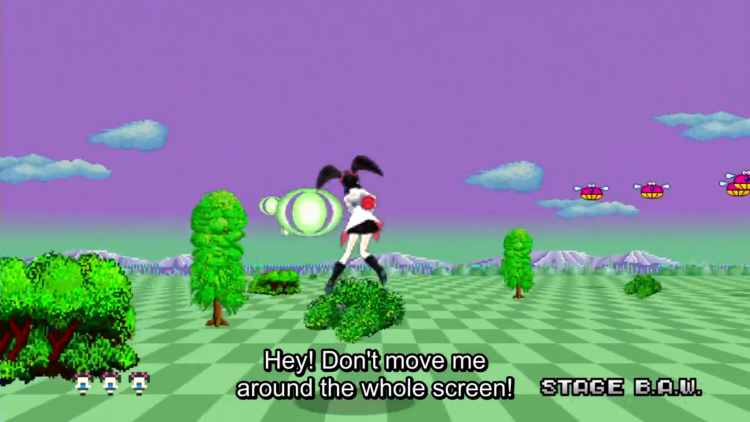 First of all, the girls enter the Virtua Fighter arena from the first episode, now pitting them against Neji from Roomania, a character seen previously in the series. The girls set out to fight, with the rest of their trials documented in the style of the Streets of Rage opening, complete with that kickin’ soundtrack. This wall of text details how several Assassin’s are lured to fight the Girls in Black Asobin World by the promise… of a famous voice actress’ autograph? Fair does. The Girls apparently battle through the hordes, suffering a few setbacks along the way; Dreamcast becomes homesick, Saturn’s, ahem, chest gets exposed, and Mega Drive… well, apparently nothing interesting happens with Mega Drive. Exciting stuff, here!

Eventually the Girls reach Black Asobin, who is inside another game; and lo and behold, it’s Space Harrier, one of my personal favourite games of all time. The machine requires Credit Medals, and since Saturn’s the only one that has any, it’s up to her, with some assistance from Dreamcast and Mega Drive manning the controls, to bring down Black Asobin, and win the medals they need. Whether they succeed, you’ll have to find out!

Catch the episodes on Crunchyroll here!

6 responses to ““Hi☆sCool! Seha Girls” Episode 12 AND Episode 13 are here as the series concludes, Impressions”