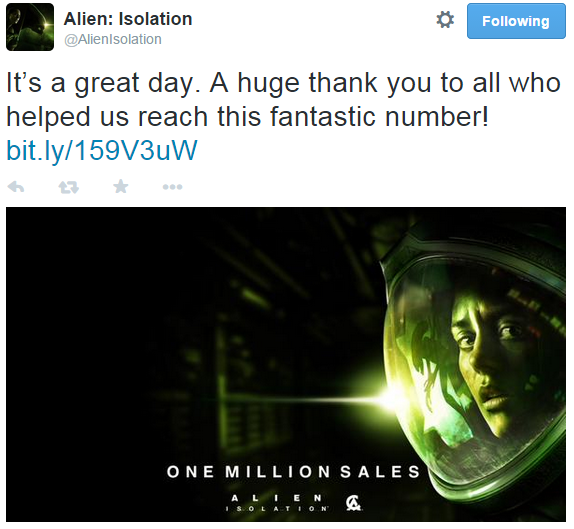 “It has been fantastic to watch the reviews come in and read of the reactions of players, hidden in the bowels of Sevastopol Station, terrified to make the next move,” said Creative Lead, Alistair Hope. “We set out to make the Alien game we had always wanted to play, and from these figures it seems we also succeeded in making the Alien game another million wanted to play. We hope many more gamers enjoy Alien: Isolation in 2015.”

“Fox is enormously pleased with how both SEGA and Creative Assembly have realized their homage to Ridley Scott’s iconic film Alien,” said Michael Doyle, vice president of interactive games for Twentieth Century Fox Consumer Products. “The project represents a paradigm shift in what is possible in the arena of licensed games.”

Alien: Isolation is a first-person survival horror game set on board a decommissioned trading station in the fringes of space. Players find themselves in an atmosphere of constant dread and mortal danger as an unpredictable, ruthless Xenomorph is stalking and killing deep in the shadows. Underpowered and underprepared, you must scavenge resources, improvise solutions and use your wits, not just to succeed in your mission, but to simply stay alive.