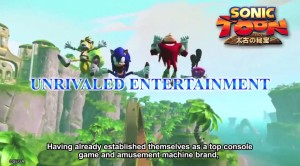 SEGA and BBC Earth team up to fuse technology and nature