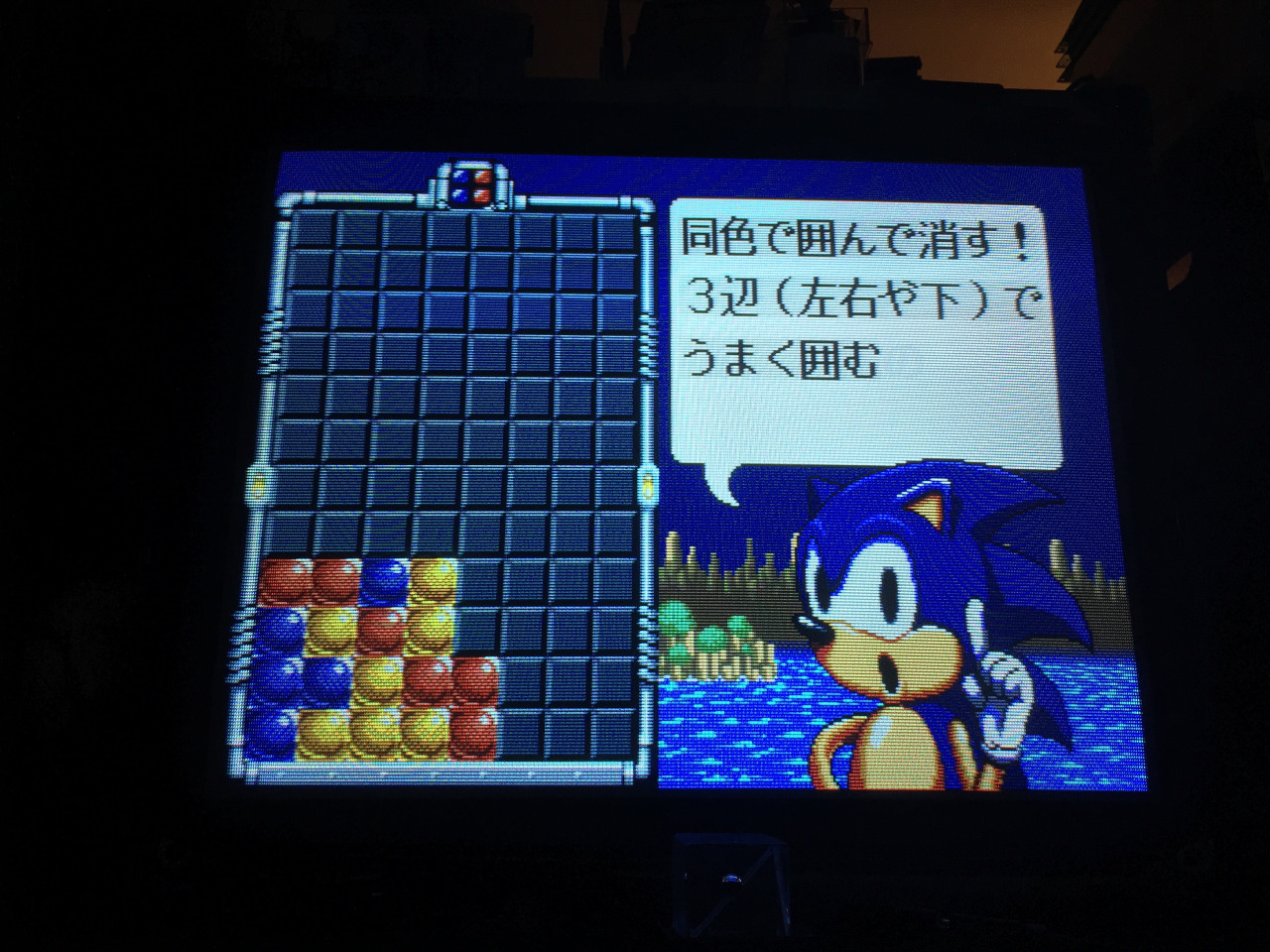 The SegaSonic Bros. saga continues with a new screen and a detailed description of how the cancelled 1992 arcade game played. First off, it is now abundantly clear that the game was not a prototype of 1993’s SegaSonic the Hedehog. Despite a similar name and title screen, and the appearance of two additional characters colored red and yellow, SegaSonic Bros. was actually a drop down puzzle game from Bubble Bobble creator Fukio Mitsuji – a far cry from SegaSonic the Hedgehog‘s isometric platforming controlled with a trackball. Amazingly, SegaSonic Bros. was revealed as far back as June 2014 when SEGA 3D Classics developer and SEGA legend Yosuke Okunari tweeted a zoomed in screen of the game in action in reply to a tweet from Kenjoh Kohji who had shared a link to a site describing SegaSonic Bros.. Unfortunately, the conversation went unnoticed by fans, likely because Okunari was replying, it was in Japanese, and the screen was not overtly Sonic the Hedgehog. 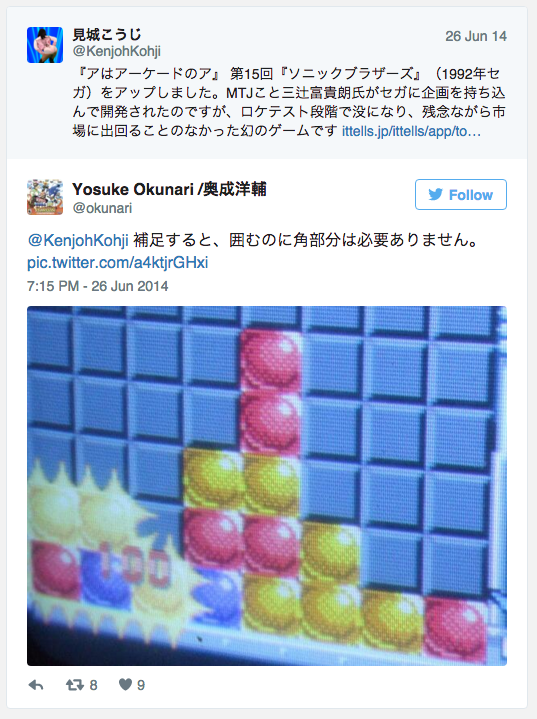 However, following the rediscovery of the game by Tumblr user ShouTime, fans came across the old conversation and went ahead and translated the original description of the game:

Mitsuji Fukio, known as MTJ and for the design of games like ‘Puzzle Bobble,’ ‘Sylvalion,’ and ‘Omega Fighter,’ was the director of ‘Sonic Brothers.’ Though he designed and developed the game, it was cancelled after the location test and was never brought to market.

I can only remember playing it a few times, but it seems there aren’t many people who have written down their memories of the game, I’ll attempt to describe it as I remember it. I’d be happy if any who knows the game could point out any errors:

The game was a falling-block puzzle game using ‘Sonic the Hedgehog’ (similar to Tetris or Puyo Puyo).

The multi-colored Sonics in round spin attack form

In a 田 shaped block, a set of 4 fall downwards. You can rotate the block, and they will pile up at the bottom, and when Sonics of the same color surround a different colord Sonic, it disappears.

This can happen by forming a ring with the same colors or by using the walls. I’ve drawn the possible scenarios below. This character ■ (Same color) represents the Sonics that surround × (which can be any color) which are Sonics that will disappear:

Not using the bottom (for example, making a ring) might have been allowed too, and I think you could drop one block to complete two enclosures at once, but I can’t quite recall what would happen in that case (but I imagine that they disappeared in any case like that).

If you’re a puzzle game lover, you can probably imagine the game was a bit frustrating and difficult. If you make just one mistake with placement, your plan will fall apart, and it’s extremely difficult to start stacking over again. It’s also problematic that there so many blocks, since they come down in fours.

Since the surrounded blocks can be any color, as a bit of advice, it becomes extremely important to pay attention to the color as the game progresses. It’s infuriating to throw away a block when it turns out you needed it, –unsure–

Not just limited to the falling blocks, the game further adopted the concept of ‘encircling.’ While playing, (according to the rules) while keeping track of the situation inside and outside of the boundaries, it’s necessary to follow the tracks of the boundary line. It’s a difficult game where your eyes have to take in wide scope of things all at once. That concept reappeared in some later, released games.

That’s about all I remember of ‘Sonic Brothers.’ There may also been a kind of support item that looked like the gems from ‘Coumns,’ but I can’t recall.

I think a more polished example of the ‘Sonic Brothers’ idea is the Taito game ‘Cleopatra’s Fortune.’ The encircling idea greatly resembles it, but the parts that surround and can be surrounded are different, and there’s much easier to understand gameplay.

I think MTJ’s forte as a designer is to start with a single catchy idea and forcing it to work as problems arise.

I had only played the game a few times, and there are no materials, so the rules and such might differ from how it actually was. I’d appreciate any knowledge anyone has about it.

I think it’s awful that I won’t get to experience ‘Sonic Brothers’ once more. It might be amusing to program a game with the same structure.

Following this, ShouTime congratulated fans in their discovery with the screenshot seen at the top of this article and added the message “Great detective work, bros! Sonic teaches us the rules to the game”.

So there we have it! In 1992, Fukio Mitsuji developed an arcade puzzle game entitled SegaSonic Bros. which featured Sonic and red and yellow doppelgangers. The game ended up being pretty difficult and frustrating, and was cancelled after a localization test. What is so exciting now is that not only do we know the story of a long lost SEGA and Sonic arcade game, but there is the possibility that the game could be made available to play on emulators. Once that day comes, we’ll be sure to share the news. In the meantime, try and think up names for Sonic’s red and yellow friends.