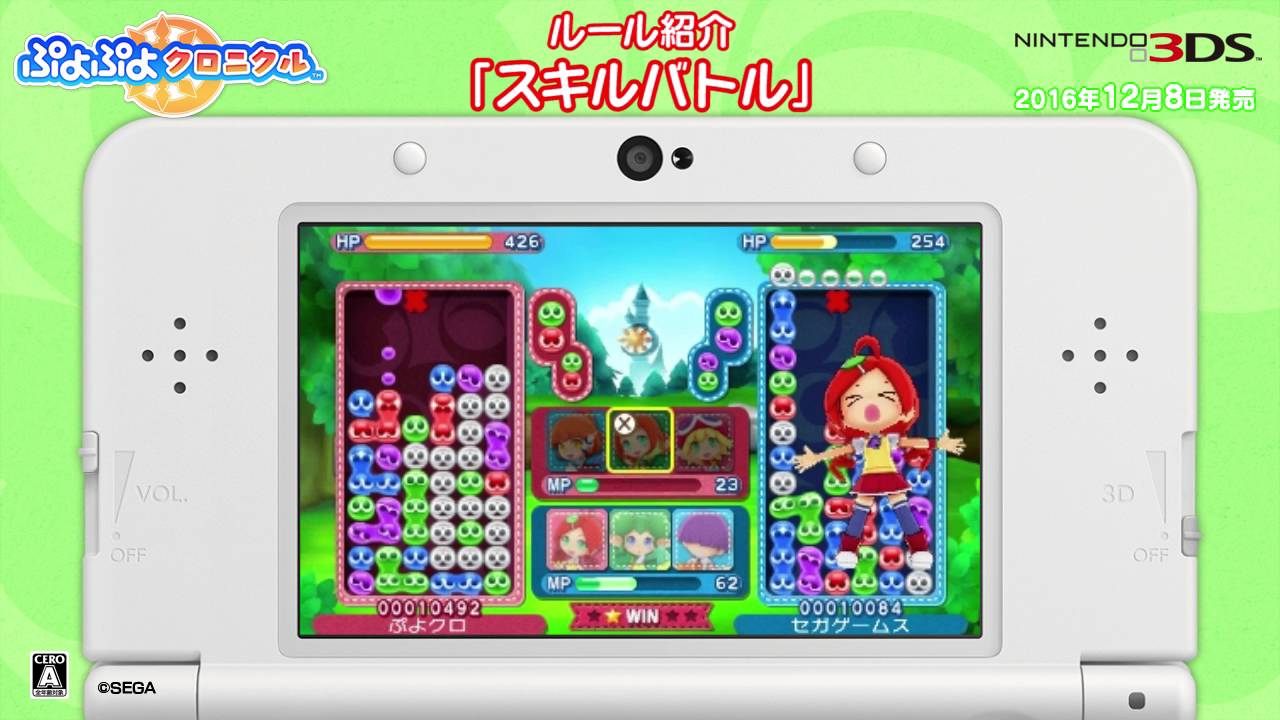 Based on the first arcade game called Puyo Puyo (aka Dr. Robotnik’s Mean Bean Machine and Kirby’s Avalanche). This mode lacks various mechanics like offsetting and All Clear, making the game as vanilla as you can get. However due to the lack of offsetting, the game lacks any sort of defense against Nuisance Puyo, meaning that if a player creates at least a 5 chain the opponent is guaranteed to lose.

Based on the arcade game Puyo Puyo Tsu. This mode includes various mechanics that were introduced in that game, like All Clear, Margin Time, and most importantly offsetting. Because of the combination of mechanics, Puyo Puyo Tsu is a standard for Puyo Puyo, the gameplay style being included in many future titles and varies modes borrowing mechanics from it.

Based on the arcade game Puyo Puyo SUN. This mode uses the same rules as Puyo Puyo Tsu, however it includes a type of Puyo called Sun Puyo. By offsetting a chain, the player will receive Sun Puyo, the amount depending on how much the player offsets. Sun Puyo behave like Nuisance Puyo, however when cleared they increase the power of the player’s chain. Because Sun Puyo behave like Nuisance Puyo, they can block off the player, however the game tries to foreshadow where they’re going to drop by displaying a beam of light in certain columns.

Based on Puyo Puyo Fever (aka Puyo Pop Fever outside of Japan). This mode includes character-specific dropsets and chain powers. Dropsets cause characters to drop different types of Puyo in a specific order, going through 16 Puyo types and then cycling over repeatedly, while chain powers have minor chain strengths between characters.

However the most important mechanic is the titular Fever. The gauge next to the player’s board contains 7 slots, and every time the player offsets a slot gets filled. Once all 7 slots are filled, the player enters Fever. Once in Fever, the player is tasked with clearing preset patterns, allowing the player to set off weak fast chains easily.  If the player successfully clears the pattern, the next pattern will be slightly bigger, but if the player fails, it will instead decrease. Regardless, setting off any chain resets the field with a new pattern, until the player’s time limit is over.

Based on the “Quest” mode utilized in Puyo Puyo Chronicles, by extension making it the only new mode in the game. Players select three different characters, and instead of simply burying the opponent in Nuisance Puyo, the player is tasked with knocking out the opponent by reducing their HP to zero. Each character has their own specific abilities limited by a “mana” meter, for example Amitie is capable of transforming random Nuisance Puyo into red Puyo. Setting off chains also provides a player’s party with bonuses such as increased attack and defense.

The player is tasked with digging through rows of Puyo in order to reach the star on the bottom. By default the Target Points is abnormally high, meaning that chains will have pathetic power. Instead the player has to clear the star in order to send an endless supply of Nuisance Puyo at the opponent, forcing the victim to lose.

Same rules as Excavation apply. The difference is that 3 colors are used instead of 4, and due to the titular Mini Puyo the board is effectively 10 x 18 instead of 6 x 13 like a typical board.

The player uses giant Puyo. Because of these giant Puyo, the board is effectively 3 x 7 instead of the standard 6 x 13. To compensate for the cramped board space, Puyo chains count 3 or more Puyo connected as a chains instead of 4 or more connected like normally.

Players are permanently in a Fever state, with the goal to try and beat the opponent at clearing the cache before they do and defeat them using Nuisance Puyo. Like with Fever normally, clearing a preset board increases the length slightly, but if the player sets off the preset board incorrectly it instead decreases.

Based on the “Mega” transformation from Puyo Puyo 7. Players utilize giant Puyo, with the intent of trying to clear away the cache first and cripple the opponent with Nuisance Puyo. While it uses the same premise as Non-Stop Fever, no preset boards are utilized.

Based on the Big Bang mode from Puyo Puyo Tetris. Like with Non-Stop Fever, players are tasked with clearing preset boards as fast and efficiently as possible with the intent of beating your opponent. However the game instead makes players play through rounds, with a set time limit to inflict as much damage as possible. Once the time limit is over, the game calculates how powerful each player’s efforts were and inflicts damage onto whoever had the weaker results. Once a player’s HP is depleted, they are knocked out. The game will continue cycling through these rounds until the last player stands.

The player plays using modified chaining rules. Normally when a chain is set off, the play loses all control until the chain is finished clearing. However in Active mode, players still have control while chains are being set off. This means it’s possible to expand on a chain while it’s still clearing.

Instead of Nuisance Puyo, players dump frozen over Puyo onto the opponent’s field. Frozen Puyo defrost after a set a mount of intervals (by default 3), then becoming normal Puyo. Each character dumps these Frozen Puyo in a specific pattern, comparable to the character-specific patterns used in the game Super Puzzle Fighter II Turbo.

The board is preset with steel blocks that cannot be removed. Players are tasked with beating the opponent with Nuisance Puyo while trying to compensate for the limited space, with the blocks being randomly set between matches. Otherwise plays like Puyo Puyo Tsu.

All the dropsets are changed in order to always drop 4 Puyo at a time. The different type of Puyo otherwise behave the same, for example Giant Puyo will still rotate between the different colors.

Every 10 seconds (default), every player’s board is rotated 180°, flipping over everything in the process. If the player manages to create a chain because of the flip, their chain receives a bonus boost in power.

Players can see the next 4 Puyo pieces in the Puyo cache instead of 2 like normally. All other mechanics are based on Puyo Puyo Tsu.