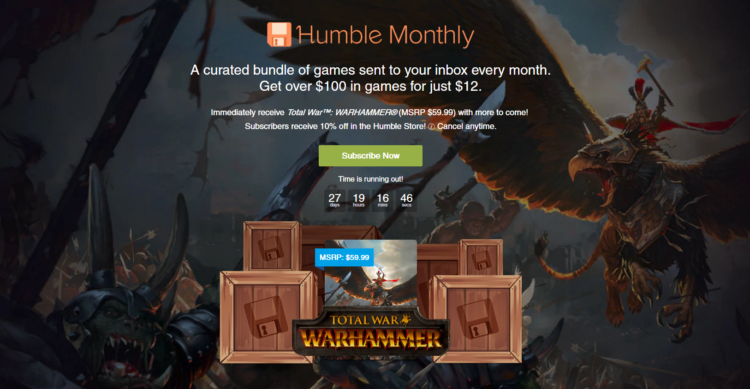 SEGA has teamed up with Humble Bundle, a charity driven PC game store to offer gamers Total War: Warhammer for $12 bucks. Getting Total War: Warhammer for $12 bucks is a huge deal, considering that this seems to be the lowest price for the title. But there’s more, you also unlock at least six more games at the end of the month. Last month’s bundle had big titles like X-COM 2, Ryse: Son of Rome, Abzu, and more. If you pay the monthly fee of $12 dollars now, you can download Total War: Warhammer today and start enjoying the game. Just make sure that at the end of the month, when all the games unlock, you cancel your membership or they’ll charge you for the next month.

Is Total War: Warhammer worth the $12 dollars? Well the game has mix ratings over on Steam but manage to score well with critics. Why the mix feelings from fans? Most fans say this is the best Total War game created but are a bit disappointed on how SEGA and Creative Assembly have implemented DLC. Looking at the DLC for the game I don’t blame them, having two packs costing $18.99 for new races is a bit steep. There is also a few free pieces of DLC like Grombrindal the White Dwarf and Wurrzag.

Going to be honest, I think Total War: Warhammer for $12 plus more games at the end of the month is a steal. If you like Total War or these type of strategy PC games, give it a shot. There is also a Mac compatible version for those readers not running Windows.