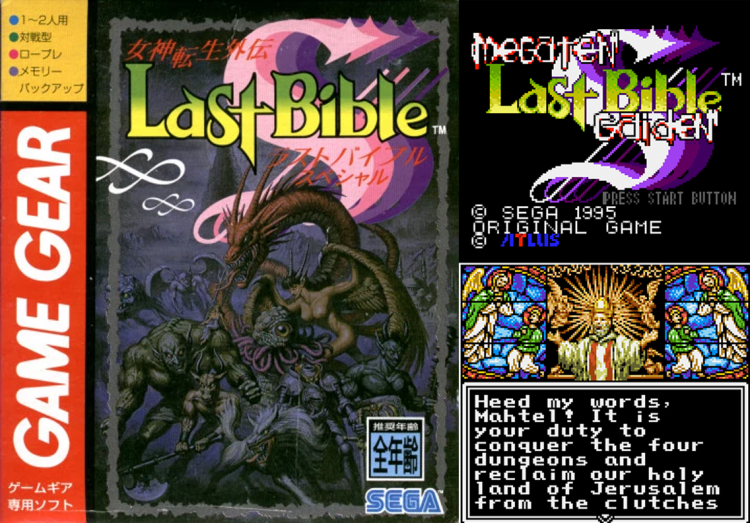 Megami Tensei Gaiden: Last Bible Special is a strange little title, since the game was actually developed by SEGA for the SEGA Game Gear. That’s right, this was a joint effort by Atlus and SEGA, way back in 1994!

“… Last Bible Special was only released for the Game Gear, and is much closer to the Megami Tensei series in terms of gameplay. The dungeons are now first person again, removing it heavily from the other Last Bible games. Instead of the usual historical theme, the setting seems to be in biblical times, with a heavy Christian slant – you’re given orders by someone who looks much like a Catholic bishop, and the backgrounds are adorned with ornate stained glass windows. And good lord, do they look good. While the static screenshots may look boring, the scrolling is much smoother than even the Super Famicom games…”

The team not only translated the game, it also added in-game improvements:

“Here is the complete English translation patch for the Game Gear title, Megami Tensei Gaiden: Last Bible Special. Not only has everything been translated, but some improvements to the game have been made as well, such as making the enemy encounter rates more reasonable and incorporating faster turning in the dungeons (as it was very slow by default). We hope you enjoy this release! Consult the read-me included with the patch for more information about this project.”

You can download Megami Tensei Gaiden: Last Bible Special over at romhacking.net, if you enjoy it make sure you share the release with other SEGA Game Gear fans. I mean, the fans behind the project did put a lot of effort and its nice to see them getting attention they deserve.