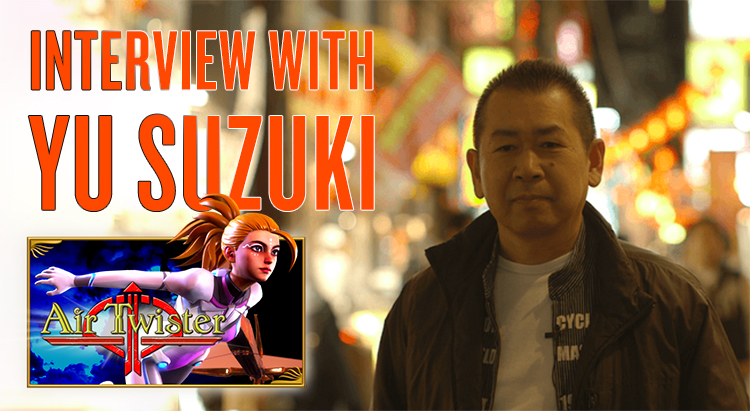 It goes without saying that Yu Suzuki is one of the most influential figures in video gaming. Yu Suzuki was instrumental in the development of full body motion controls, 3D racing, 3D fighting, open-world gameplay and QTE. Even if you have never played one of his titles, which you really need to rectify right now, you have played a game that includes one of his contributions to the gaming industry.

Space Harrier, one of Mr. Suzuki’s early arcade titles, was a third-person rail shooter set in a fantasy environment. The player controlled a jet propelled cool blonde dude, shooting down everything from geometric shapes to robots to one-eyed woolly mammoths. The game was such a success that it was one of Japan’s top two highest-grossing upright arcade games in 1986. The other title was Mr. Suzuki’s Hang-On, released a year prior. Now, in 2022, Yu Suzuki is returning to the world of third-person rail shooters with the Apple Arcade exclusive game Air Twister which is set to release on June 24, 2022.

Mr. Suzuki was kind enough to grant us an interview to talk about the upcoming title, and as luck would have it we are releasing this on his birthday! So before we kick things off, we would like to wish Mr. Suzuki a happy birthday and thank him again for taking the time to answer our questions. 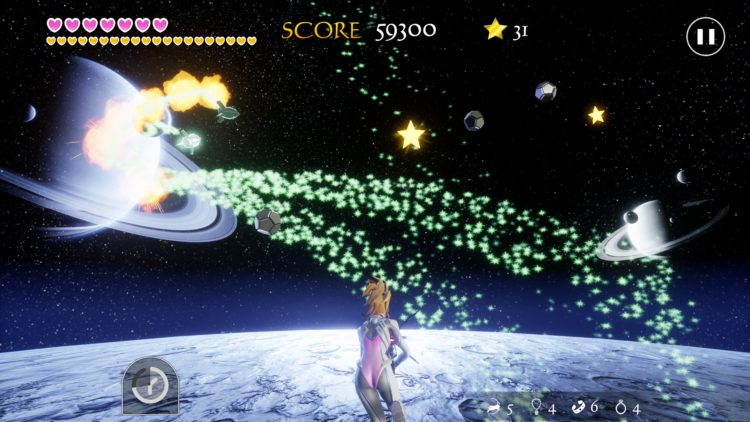 When asked about what inspired him to return to the genre of third-person rail shooters, Mr. Suzuki told us, “When I went to Apple Headquarters, the idea came up if I would be interested in making a simple, straightforward game that you’d want to play over and over again, akin to the old school arcades. I came up with a few ideas and finally pitched a touchscreen shooting game.”

Apple Arcade is, of course, Air Twister‘s exclusive debut release platform. The service allows subscribers unlimited access to a library of games, with all content freely included within the game. Apple Arcade is accessible on a variety of Apple products, from smartphones and tablets to laptops, desktop computers and home televisions. 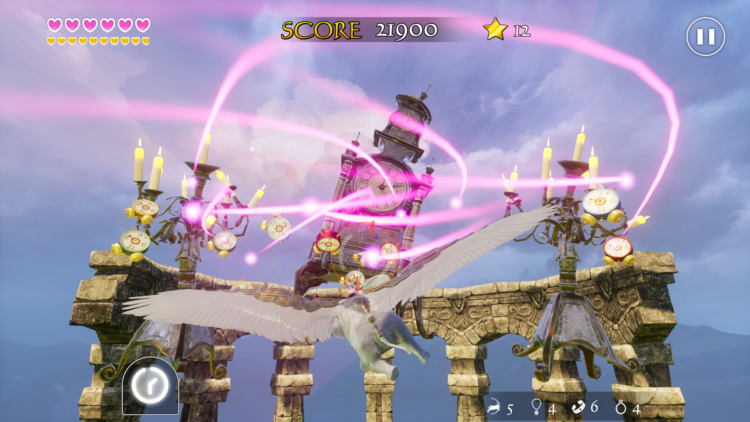 Thanks to the iPhone platform, touch controls were a focus. “Considering that the iPhone would be main target for Apple Arcade, we wanted to create an interface with a focus on a fun touch screen experience,” Mr. Suzuki said. “Of course we were also thinking about core shooting game fans, so gamepads which they know and love, are also supported.”

This answer delighted me personally, as I have found that an Apple TV and a bluetooth gamepad makes for an excellent console quality experience. This news also makes me wonder how Air Twister will play on an Apple arcade stick, which I plan to try out on the game when it releases. 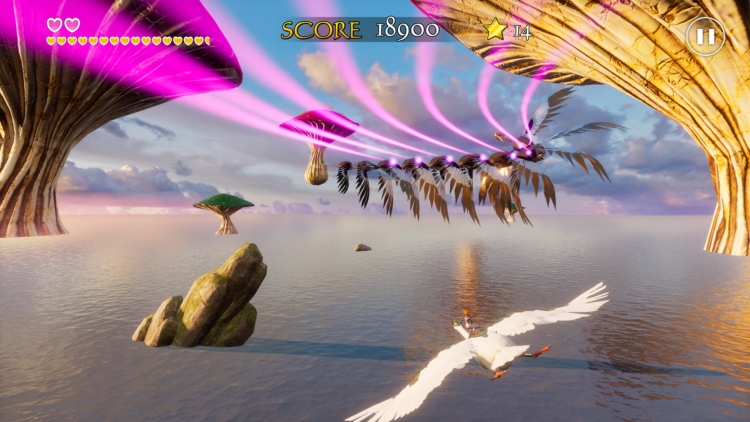 But what about those playing on iPad and iPhone? Surely the gyroscope will be utilized. “The gyroscope is not used as a control input,” Mr. Suzuki answered. “But to make the gameplay smoother, we do use the gyroscope to maintain a level horizon.”

When comparing Space Harrier to Air Twister, what immediately stands out is the jump from 2D to 3D. While Mr. Suzuki’s early arcade games utilized super scaler visuals to simulate depth, much has changed in the past thirty years. While SEGA and various fan games have continued the third-person rail shooter genre, Air Twister marks a return for Mr. Suzuki.

When asked what gameplay opportunities the jump to full 3D offered, Mr. Suzuki said, “By going with a rail shooter, we were able to create an unprecedented level of precision with formation attacks. It also gave us the opportunity to make the lock-on feature feel really satisfying, and design levels with effective learning curves.” 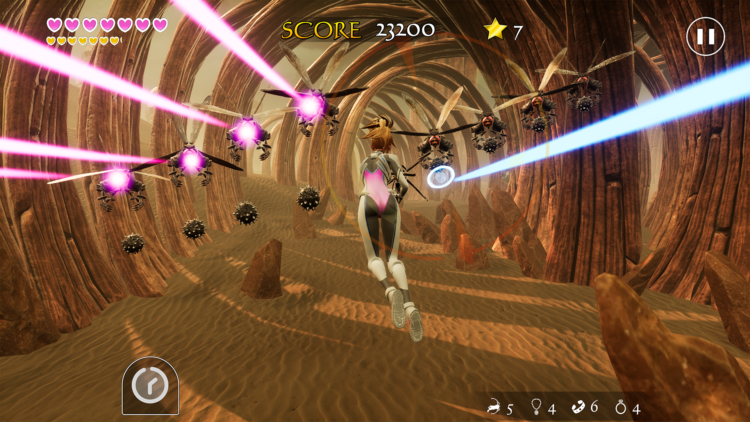 The only descriptor this image gave us was “Moai”. A location or the name of a creature? We will find out!

Air Twister tells a unique story, featuring Princess Arch whose home planet is under attack. Her arsenal appears to feature an army of giant swans, one of which she has a unique connection to. When asked about the story, Mr. Suzuki hesitated to share more. “I’ll have to ask you to wait on that one,” he said. “But the story and world of Air Twister unfolds little by little as you progress through the game, so I hope you’ll continue to look forward to it!” 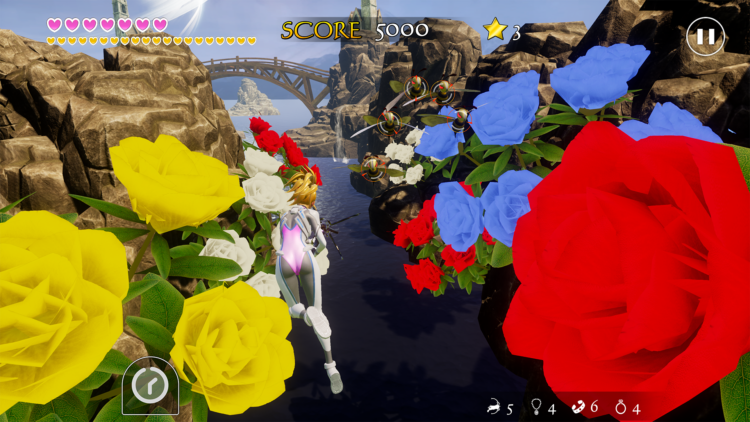 As for music, the game’s debut trailer featured epic operatic music before switching to music that can only be described as sounding like the rock band Queen. When we asked if this music is an indication of what we will hear throughout the game, Mr. Suzuki had this to say: “I asked the artist Valensia to do the music for this project. His fusion of rock, opera and classical music styles was the perfect fit for my ideal of the fantasy shooter.”

Valensia is a Dutch musician best known for his symphonic anthem and international hit Gaia. According to Valensia’s website, the artist saw a successful career in Japan and Southeast Asia, which would explain how he came to Mr. Suzuki’s attention. 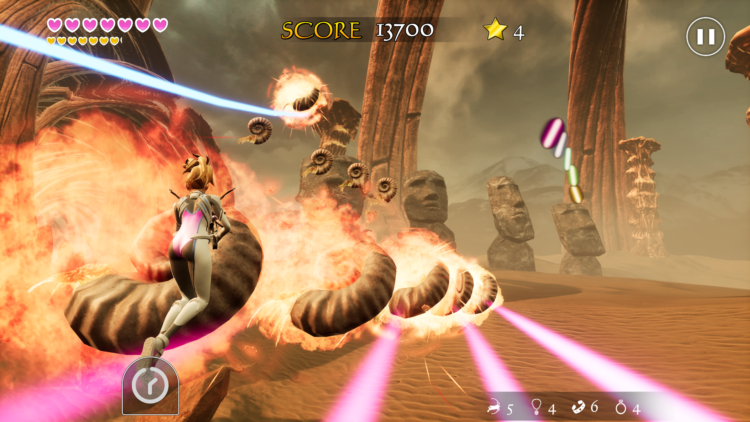 We ended the interview asking if there is a chance Air Twister could see an anime or manga, or if we might see Air Twister appear in a Shenmue 4 just as Space Harrier famously appeared in the first two Shenmue games. Mr. Suzuki told us he had no information for us at this time regarding these questions.

Fans such as myself are very excited to see what Yu Suzuki has in store for us with Air Twister, so it is understandable to want to ask “what’s next?” for the new franchise even with the release date on the horizon.

My sincere thanks to Mr. Yu Suzuki for taking the time to answer my questions about Air Twister. As a longtime fan of his work and a Space Harrier super fan, this was a video game fan site bucket list moment.

Air Twister releases June 24, 2022 to Apple Arcade. Stay tuned to SEGAbits for our review of the game!