Constructoid is a show that discusses the ‘issues’ in video games. This one features Princess Peach and Bayonetta as examples of bad stereotypes in games.

The video basically shows everything that’s negative about Bayonetta, yet doesn’t take the time to shed light on what’s positive about her character. Is she ‘sexy’? Yes. Is she a whore? No. You would have to have sexual intercourse to do this or even ‘touch’ someone sexually. Bayonetta didn’t do this. But she did have character, especially her relationship with Jeanne. Also I don’t see Bayonetta, a character who isn’t ashamed of herself and who defends herself, as a negative for the feminist movement. (I talk more about this here).

I think that people, especially men, overthink this ‘sexual’ issue with women in video games. Why is it always men that whine about it? Girl gamers don’t seem to mind it, seeing as how Bayonetta is being cosplayed so often.

Sega continues to heckle Destructoid over Jim Sterling’s review of Sonic Colours by inviting Jon Carnage to Sega of Americas HQ and awarding Destructoid with a 4.5 cake.

Jim Sterling gave Sonic Colours a 4.5/10 while the average score was around the 8/10 mark amongst other (better) critics.

I think Sega have handled a rather poor review pretty well, showing they have a sense of humour and taking a few digs at Destructoid along the way. If anything I think it shows good faith in their product.
Well played Sega. 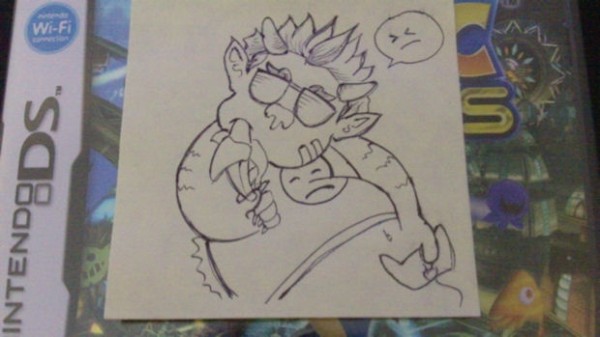 Above is a drawing that came with the review copy of Sonic Colors that was sent to Destructoid’s Jim Sterling. It is him as the troll that he is, probably eating some Super Monkey Ball endorsed banana and talking about how horrible and mediocre it is.

Now Jim, put up that long awaited negative review for Sonic Colors, we are waiting.