Henshin Engine is a game based on a web comic that is set to release in early 2017 to PC-Engine/TurboGrafx-16 and PC CD-Rom/Steam. The game features 2D action platforming and was programmed from the ground up for classic systems. With 6 days remaining in their Kickstarter campaign, Henshin Engine is $8,000 past their $16,400 goal, meaning they’ve started to chip away at their stretch goals. Of interest to SEGA fans is the promise of a Dreamcast post, set to release in late 2017, should the campaign pass $22,400. Given they are $2,000 past this goal, a Dreamcast version seems assured, though the developer has yet to release an update sharing this news. 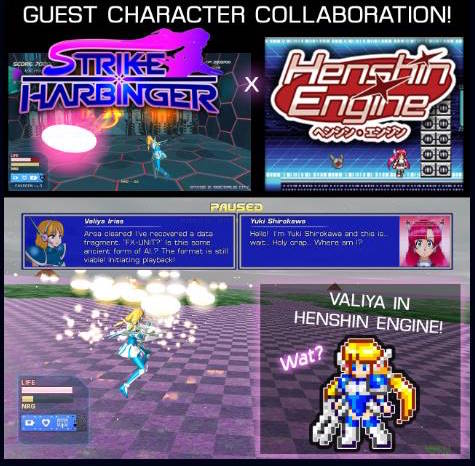 Henshin Engine is an independent game that currently has an active Kickstarter campaign for a PC Engine and Steam release. Henshin is a 2D action platformer with a few horizontal shooting stages in the mix. It follows the adventures of a young gaming fanatic named Yuki who is transformed by her beloved console, the FX-Engine. Her opponents include Ultra Drive Unit: Genji, an obvious take on the Sega Mega Drive.

Today the team behind the project announced that they have adjusted their stretch goals for the Kickstarter campaign to make a Dreamcast port a higher priority.

The people have spoken! So we’ve gotten TONS of emails asking us to specifically port Henshin Engine to the Dreamcast and that it should be a reward that’s realistic to achieve. Although I would like to think that ALL the stretch goals are realistic to achieve *wink*, we did ultimately decide to make it the very first stretch goal we hit. I would be more than thankful to just hit our funding goal so that the game gets made, but if we hit that first stretch goal, that would be extra awesome! So remember you DC fans, thank your friends for the countless emails about Henshin on DC, but more importantly, SHARE with all your DC friends so that we can bring Henshin Engine to the DC! I wouldn’t mind seeing an animated cutscene for Yukis transformation