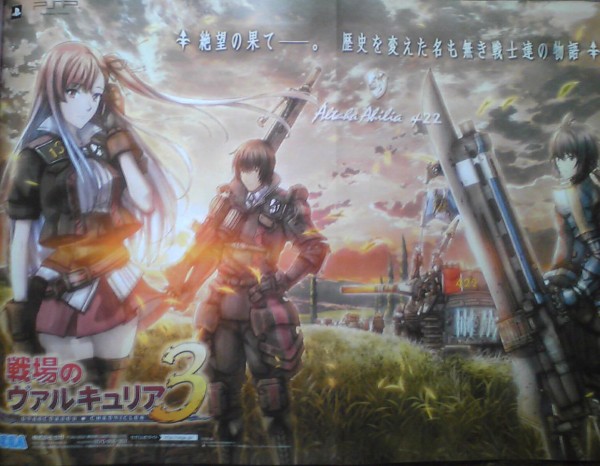 SEGA has confirmed the official release date for Valkyria Chronicles 3, it will come out on January 27th, both on retail (¥6,279) and digital download (¥5,660).

The full name of the game is Valkyria Chronicles 3: Unrecorded Chronicles, the game will have an all new cast of characters, just like the part 2. The game will also take place in 1935, the same time as the first game.

In this game, you take control of squad 422, nicknamed the “Nameless”. The squad is made up of criminals that go by numbers, thus that is where they get their nickname, the nameless. The magazine introduces the squad members as numbers.

Number 7, real name Kurt Irving (voiced by Yuichi Nakamura) is the main hero in this game. He used to be a great officer with a bright future, but a unexplained incident in the press causes him to fall into the Nameless. He hopes that if he does well, he will be able to re-join his squad.

Number 01, real name Imuka (voiced by Masumi Asano), is the heroine and ace of the Nameless. She had her whole village wiped by the Valkyria, she went to search for the culprits and was then rescued by the Nameless. She plays the quiet type.

Number 13, Riela Marcellis (voiced by Aya Endo), is the second female from the Nameless squad. She is a decedent from the Valkyria, but no one in her squad seems to realize this. Her last squad was entirely killed off, being the lone survivor she was called “god of death” and was disbanded to the Nameless.

Famitsu had a lengthy interview with Shinji Motoyama and asked them a bunch of great questions. The first question is why they chose to release the 3rd installment on the Playstation Portable. He stated that there are numerous reasons, one being that they wanted to further develop the series beyond what they achieved with the last game.

“In an era where everyone is busy, we felt PSP was best in order to make Valkyria Chronicles bigger.” – Shinji Motoyama

Motoyama does talk about the Nameless group, he says they do the Militaries dirty work, stuff that if the Military did it, they would get in trouble. This is the reason why the squad is made up of criminals and trouble makers.

While playing through the story, you are expected to have 20 squad members by the end. Guest characters will highly increase the amount. Number 7 (Kurt), is the only officer in the squad. Imuka (#01) and Riela (#13) have constant conflict in the game, this will be a major plot of the story. If you didn’t read the description above, Riela is a Valkyria decent and Imuka’s village was wiped out by Valkyrias. Imuka will have to choose what is more important to her, revenge or her squad.

Shinji Motoyama says that the games progression is being redone and will deliver an experience closer to Valkyria Chronicles 1, instead of part 2. Thus the game will not be mission based. You will advance through the story while getting into battles. Motoyama feels this method is easier for players to get into the story.

The command interface is also being reworked for the new title. You will be able to do more things during action sequences. The maps will still be area-based, but this time around they will be bigger and vary in design. The leveling system will also get a new interface, they will take a ‘quality over quantity’ in terms of classes. The units will have a ‘clearer role’.

Motoyama revealed that the game’s heroines will each have their very own ‘super modes’, Riela’s will be Valkyria mode and Imuka’s will be a mode that unleashes the full power of her weapon. No further specifics where shared. The Super Mode will be playable at this years TGS demo.

Motoyama said there are lots of features being kept secret. Famitsu says they may have found a new feature he might be hinting at. In a screenshot, it shows Kurt and the two female characters running around together. They think this could be on of the new features in the game (not really sure what it will do, to be honest).

An odd move, this game will not have wireless play like the second game. The reason is for this is that the theme for this title is the story and that resources that would be used for wireless play will be going into other gameplay changes.

For those of you attending Tokyo Game Show, you will be the first to sample Valkyria Chronicles 3. The demo will have a original scenario, which will introduce players to some of the new features the game will have.

SEGA will also have a stage talk event that will feature the voice actors for the game. During the stage show, SEGA will reveal new details about the game’s release and pre-order bonus’.

8 responses to “Valkyria Chronicles 3: All you need to know”