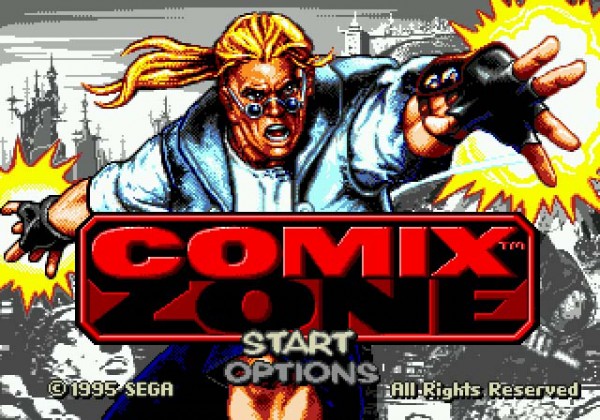 Comix Zone was developed, in my mind, by one of the most creative SEGA teams during this time; SEGA Technical Institute (STI). The team had industry greats working there, such as Mark Cerny, Stieg Hedlund and Yuji Naka. I think the team also shows how innovative SEGA really was at that time. You see, now every Japanese team wants to ‘learn’ from western developers, the reason is because western games are outselling Japanese games. Back in the early 90’s, this wasn’t the case. Regardless, SEGA Technical Institute was made to show Japanese developers western culture via video games. Easier to do with a western branch.

Like most video game fans, I was a huge comic book fan as well. Sure we have had a ton of comic book games on the consoles, but this wasn’t about a license, this was trying to get the comic book feel with some solid beat ’em up action. The game is really unique in the fact that it uses the comic panel very well, giving you multiple paths to finish a level. Not only that, most panels had some sort of obstacle to pass.

Sometimes it would just be fighting some bad guys, other times it would be using items that you equipped to get pass safely (using your rat to  turn off a switch on the other side of a spinning fan for example). The game also had pretty cool art design ideas, like having a ‘hand’ come out and draw enemies that appear on screen or them ‘pop’ into pieces of papers, giving the effect that the game is being drawn as you go through it. Worked well. The last bit that I loved about the game is how unique the animation for the character was, the hits felt heavy and animations where impressive.

According to game designer Peter Morawiec, one issue with the game was that it didn’t perform as well as SEGA would have hoped, mostly because the hype was stolen by next generation systems like the Playstation and SEGA moving to the Saturn. Peter Morawiec did concept design to pitch to SEGA for a 3D Comix Zone (art below), sadly nothing came of the design. The IP has been abandon, outside of compilations and an inferior Game Boy Advance port. 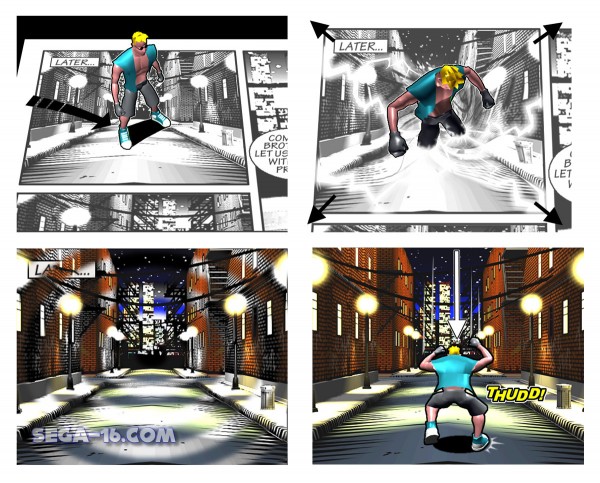 If I had to choose a way to do a sequel, it wouldn’t be 3D. I think the reason this was chosen as a way to pitch the project to the old boys at SEGA was because the gaming audiences back then wanted more 3D games. It was basically what made most people upgrade their awesome SEGA Genesis and Super Nintendo to a SEGA Saturn or Nintendo 64. It was very in and hardware manufactures wanted to show the latest 3D bling on screen.

But now 2D games are doing very well on modern consoles thanks to delivery services like Steam, PSN and XBLA. There is a big market for these ‘2D retro style’ games. Castle Crashers is probably the most popular ‘2D beat ’em up’  at the moment, taking a simple approach and a level up system to make a retro like experience, with some online fun. I think SEGA could learn to do something new, maybe focus on a single player design with multiple paths, make it fun like the orginal with obstacles on each panel.

Then for those people that will whine about not having a online ‘multiplayer mode’, SEGA can go back and re-use level assets of the single player to create a unique, nicely paced multiplayer game. I think the last step would be level sharing, something that has been getting popular with more recent games like Little Big Planet and Joe Danger. Just how the first game ‘drew the level’ out as you played, you could draw levels yourself. They could use a basic system

Basically let the user make backgrounds for the levels, hand drawn or taken a photo via something like Kinect or Playstation Eye. Not to mention SEGA developers could dump ‘special tiles’ in the game or have them earned by completing in-game tasks. After that, the gamer would be able to ‘paint over’ objects, but they will all have the same basic use. Dynamite will still just blow up and boxes and doors will all be the same.  Basically letting you ‘paint over’ non animated boxes and backgrounds/floors. Not only that, you can design your own panel layout for levels, making the levels as hard as you want.

Interested in reading more about STI, Comix Zone, and game designer Peter Morawiec? Read the awesome interview with him over at SEGA-16.