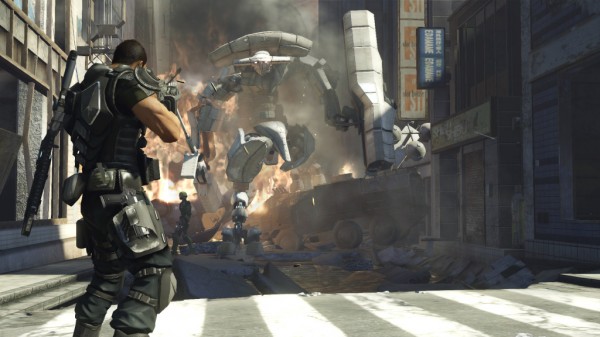 What happens when you create a ton of Yakuza titles? You and your team get a bit fed up producing those games, regardless of their quality. Binary Domain director, Daisuke Sato, said the following in an interview with TheGamersHub:

“Well Binary Domain was created by the same team that worked on all of the Yakuza series as well as another division who came together to become a large team. We had become fed up with the Yakuza series as we had felt that after four games, spanning both the PS2 and PS3, we had taken the series as far as it needed to go for now. We felt that moving into some new territory would be nice and we all quite liked the idea of bringing a world of science fiction to life. We decided nearly straight away that we did not want to set the game one hundred years in the future, and so we decided that a future that was not too far from our own would be best, as we can bring in current elements and imagine how things will have developed. We chose the location of Tokyo over places such as London or other world cities because it was somewhere that was always around us, many of the team have never left Japan and so a game world based outside of the country would have felt less believable. We decided that going for a New Tokyo made sense as the team knew about the city the most and could really take the feel and bring it into the game. It also fitted very well because Japan is known for technology and innovation so by setting the game in this place it would seem sensible that androids would be living there in large numbers. Choosing to create a game that was a Third Person Shooter was not initially what we had in mind. We were not sure what we should do but in the end the shooter fitted. It was not just as a way to appeal to a larger Western audiences, as traditionally the Yakuza series does poorly outside of Japan, by creating a shooter we would loose some of that audience because the Japanese largely do not enjoy shooters. We felt that this game could open the window of entry to both sides of the globe as we could interest Western fans with the shooting and gameplay and interest the Eastern audiences with the involving story and character interaction too.” – Daisuke Sato, Binary Domain Director

Regardless of the nickering, doesn’t seem SEGA is done with the Yakuza franchise. Especially if the new ‘Yakuza’ untitled game leaked for the Playstation Vita is true.