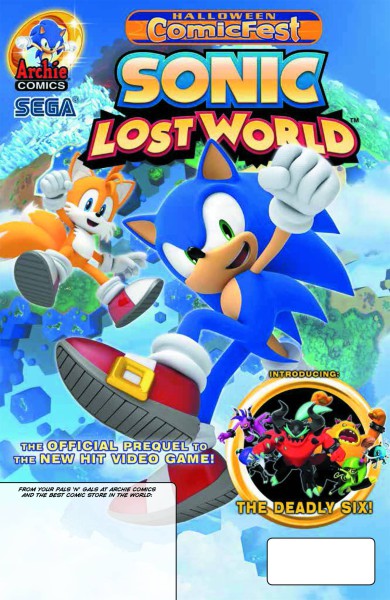 Sonic comic book fans will have the chance to learn more about new villains The Deadly Six in what’s being deemed “The Official Prequel” to Sonic Lost World.

The comic book will see release, (interestingly, after the game itself) on October 26th-27th during Halloween ComicFest, and will be disappearing from retailers after that. Needless to say, those interested should head down to their local comic book shops that weekend to snag a copy.

For Archie’s official description of the Sonic Lost World-themed issue, hit the jump.

It’s a Halloween SONIC fest! Just in time for the launch of the newest smash-hit SEGA video game SONIC LOST WORLD (on sale 10/22), comes the OFFICIAL COMIC BOOK PREQUEL available for the first time anywhere for Halloween Comic Fest 2013! Hitch a ride alongside the truest, bluest hedgehog around as this timeless video game icon takes on the newest baddies to burst onto the scene: the DEADLY SIX, and of course the evil Dr. Eggman! Hot off the heels of the titanic, “Sonic/Mega Man: Worlds Collide” summer blockbuster, Sonic comics have never been hotter! Now is your chance to check out the next big thing from the one and only “blue blur”!

Archie giving away $50,000 dollars worth of stuff at NYCC