The “wait” is over. No Limits is the thrilling sequel to last year’s The Next Level, starring A.J. Rosa, Mickey Mac, Shawn Morgan and Alex Gonzales, with Jessie Wyrick.

Shawn has decided to unleash Lucifer-Alpha on an unsuspecting SEGA West, which will be launched from his newly acquired star cruiser, the U.S.S. Uranus. Little does he realize that A.J. and Mickey Mac aim to kick his sorry ass into oblivion. Loaded with action, comedy, foul language and tasteless humor, this exciting short is proof that there are no limits.

After the break, check out the special Video CD release featuring a retro SEGA CD Saturn plastic box design that we have planned for No Limits, The Next Level, and My Life with SEGA’s reviews of Panzer Dragoon, Panzer Dragoon Zwei, Panzer Dragoon Saga, and Virtual-On. 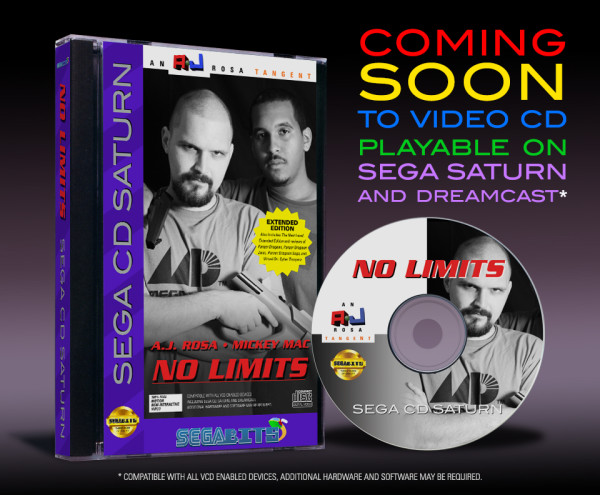 Planned for release later this year is a special Video CD (VCD) containing extended editions of both My Life with SEGA short films, The Next Level and No Limits, as well as reviews of Panzer Dragoon, Panzer Dragoon Zwei, Panzer Dragoon Saga, and Virtual-On. The disc is playable on VCD enabled SEGA Saturn and Dreamcast consoles, as well as any VCD enabled player. The cover art is a homage to the Digital Pictures FMV games released on the SEGA CD and Saturn, and like the bizarre “SEGA CD 32X” games which combined the two Genesis add-ons, we’ve created a “SEGA CD Saturn” design for the VCD release of No Limits.

Since long plastic cases for SEGA CD and Saturn games are tough to come across, we’ll only have a limited amount available and details on where and when you can obtain one will be shared soon. We also have a cardboard sleeve design planned, in the style of the SEGA Saturn sleeves, which will include a download link for the long plastic case artwork.

Up from the depths, My Life with SEGA tackles Godzilla Generations

Presenting the My Life with SEGA: The Next Level/No Limits VCD Trailer!
Features My Life With SEGA Original Content Video

10 responses to “My Life with SEGA: No Limits – online now, coming to SEGA Saturn Video CD later this year!”