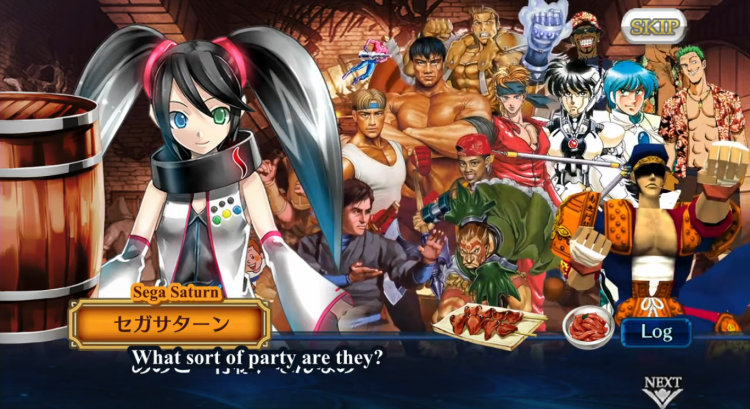 The girls are promised for each Spirit Stone they collect in the game, they’ll be awarded 15 Credit Medals; which isn’t half bad! Eventually they decide to enter the phone, and the game begins; only for them to be hit by the joys of connection errors. Welcome to online gaming, folks! After connecting, their avatars in the game are introduced, with all of them being Super Rare players; except Saturn, who as usual gets the short end of the stick. Ouch.

They go up against a few foes, and manage to grab a spirit crystal; at that point, they decide they’ll probably need a party bigger than 3, and so go to a tavern to recruit. They bump into the Bonanza Bros, who prove to be rather shoddy at thief work after all these years, and Bruno Dillinger from Dynamite Deka; who’s apparently flunking the Sehagaga Academy. Then, a huge party enters comprised of characters such as Axel from Streets of Rage, Bahn from Fighting Vipers, Harrier from, erm, Space Harrier, and many others. Eventually the search for team members is fruitless, and the Girls head out to fight some more; but when they’re faced with a rather intimidating boss, will they prevail?

Overall, this episode was pretty interesting; I enjoyed learning more about Chain Chronicle and the nods to games like Dynamite Deka are always welcome. That said, I also found it slightly forgettable; minus a few stand out moments (such as the hilarious ending), I can’t clearly remember scenes as well as other episodes, even within a few hours of watching it. I suppose my little knowledge and to be blunt, little care for Chain Chronicle has something to do with that.

Not to worry though, as the preview reveals Jet Set Radio(oooooooo!) is the focus of next week’s episode; a very welcome prospect! Stay tuned folks, this is gonna be a good one.

3 responses to ““Hi☆sCool! Seha Girls” anime Episode 9 is out, with Chain Chronicle”