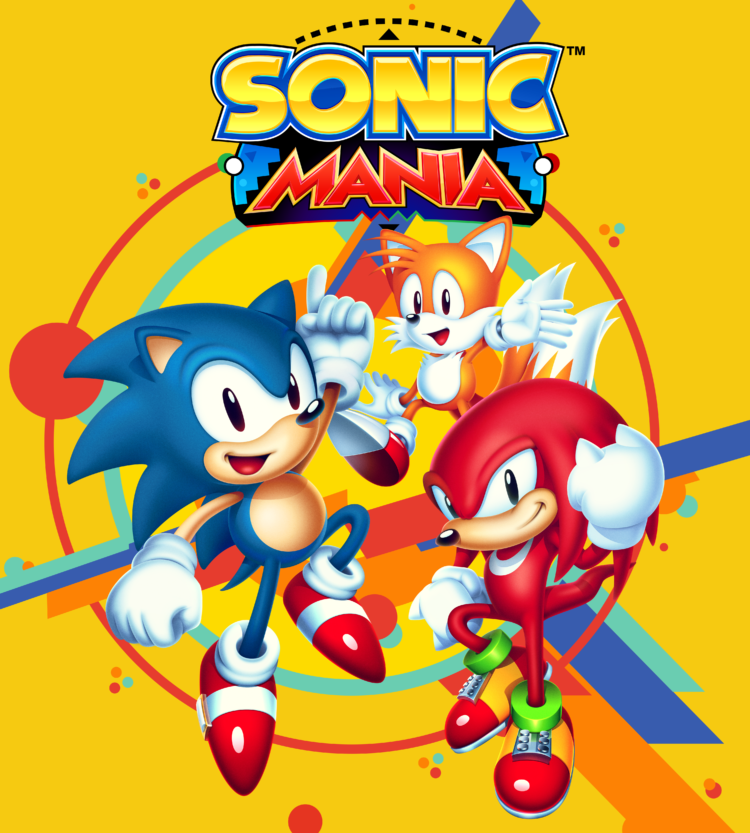 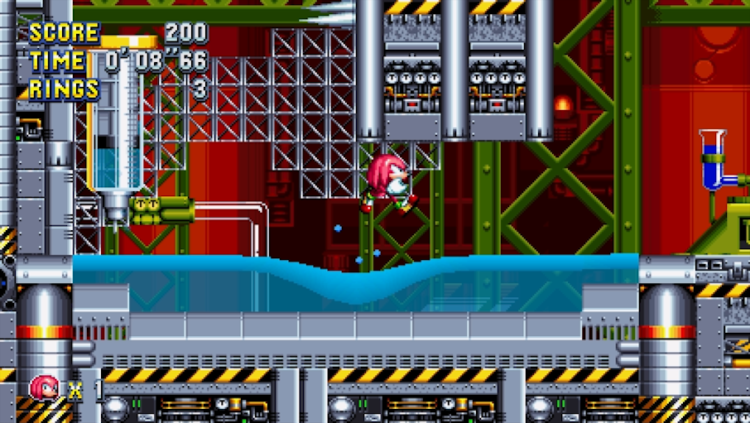 The classic iteration of the original Sonic the Hedgehog games on the SEGA Genesis, developed by fans within the Sonic fan community, are making a huge come back to modern day consoles with reimagined zones plus new ones. The demo featured two levels (second acts of Green Hill Zone & Mirage Saloon Zone) with the option of selecting Sonic, Tails or Knuckles. I got a chance to play the game at SEGA’s E3 booth and I have so many positive thoughts about this game after playing the Genesis games over the years. The game combines several elements from the other games which makes this title great. Sonic Mania combines platforming aspects from Sonic 1, easy & linear routes in Sonic 2, elemental shields & lengthy levels from Sonic 3 & Knuckles, and level design from Sonic CD which may make this one of the best Sonic titles to date. The first level I played was Green Hill Zone Act 2 with Sonic, who has a new ability called the drop dash which the player can hold the Jump button to charge a spindash in midair to keep momentum on the ground. The controls and physics were spot on as I was able to pull off a few speedrun tricks from the classic games in Green Hill Zone. The level design in both levels from the demo has amazing level gimmicks that gives their own unique settings that we love from games like zip lines and the hand gun launcher, plus the remix themes of the second acts are very impressive. The game also featured a returning boss, The Death Egg Robot from Sonic 2, in the second act of Green Hill Zone with new twists and turns as Dr. Eggman is chasing the player through the zone attacking with retractable arms and bombs which was pretty impressive and hope to see more exciting boss battles when the game releases this August. I did manage to try out Tails & Knuckles in a playthrough to test out alternate routes and for fun. The developers has really out done themselves to making this game the best Sonic title. Everyone will be excited to play this game when it releases on August 15th. 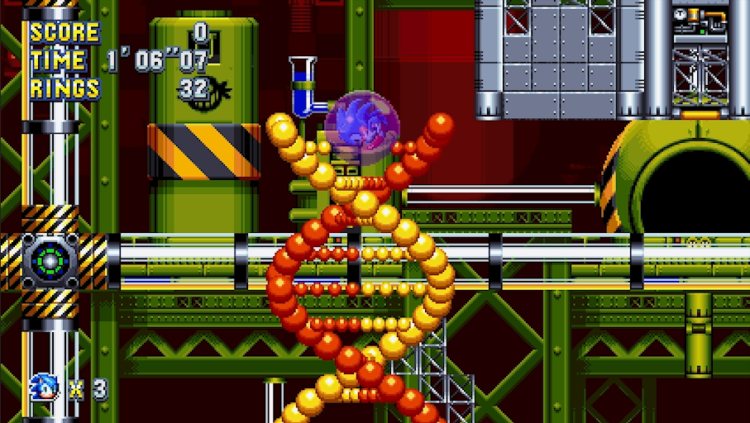 Man that drop dash is so freaking good. Mirage Saloon provides many opportunities to keep momentum going as well as accessing new areas. Bopping a monitor, holding the button to execute a drop dash then rolling down from atop a totem pole onto a spring is so satisfying that Mania is telling you to get as crazy as you can with your abilities to explore. But the drop dash as a move makes me feel that Mania is onto something by encouraging some complicated stunts. Even with a vague understanding of the level, and not having much experience with the game, I achieved a very smooth flow through the level as I made use of gimmicks to keep up speed with the assumption that I can reach higher platforms and navigate complex hazards with an understanding of Sonic’s abilities. Think about these modern Sonic gimmicks: button-activated wisps, werehogs or go-kart sections. Now compare those to what Sonic Mania has on offer: Seltzer bottles that create a temporary path that must be traversed quickly before it disappears, spinning barrels that you must jump away from before rolling down into  a lower section of the level and sand-built 360 loops that crumble by your touch. One way I see Sonic Mania as a true evolution of the original series is that I was finding ways on how I could work with the game’s physics engine to work for my advantage. 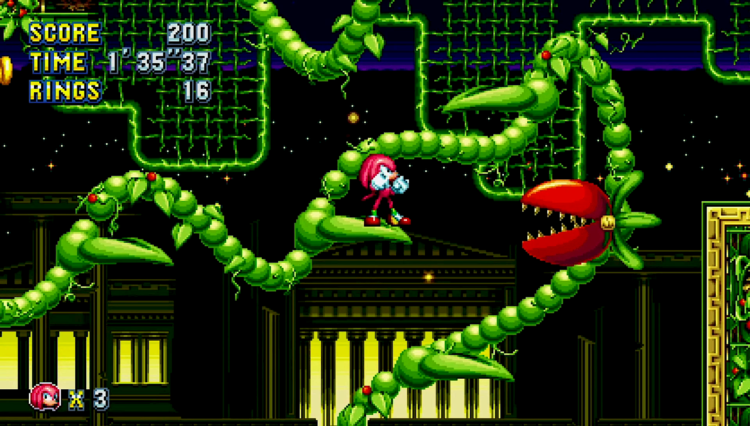 This is something I wish the older games expanded upon, but didn’t quite hit the mark like Mania does. If you know ways you can manipulate Sonic to achieve greater speed or for reaching higher platforms through speed, you’ll find yourself with new ways to find a unique flow through each level. If you were to play as Tails or Knuckles, you can get to higher places, but the trade off you have to contend with is speed. Tails flies upward slowly. Knuckles can only glide down, but can climb up walls at slow speeds. With Sonic, jumping after enough forward momentum on a rising slope can give you a greater jump height or leaping off of a wall quicker than the other two characters making Sonic a truly faster character than the other two, but Mania offers a choice between characters based on your preference. (Also based on who you think looks the coolest.) Physics can easily work against you as well. In some of the other 2D Sonic games, you had to deal with massive death pits or booster panels that force you through a level or into hazards that come out of nowhere. In Mania I hardly ever felt that the game was at fault when losing a life or taking damage. For example a Roller-like bot you jump into can cause both the player and itself to bounce off of each other, and if you’re not careful, it will send you right into spikes! It’s a refreshing experience playing a Sonic game that feels confident in the player, and if you’re not, you can still play the game at your own pace. Replayability will be encouraged to find areas previously left unexplored. (Especially to find special stages that have yet to be officially revealed.) 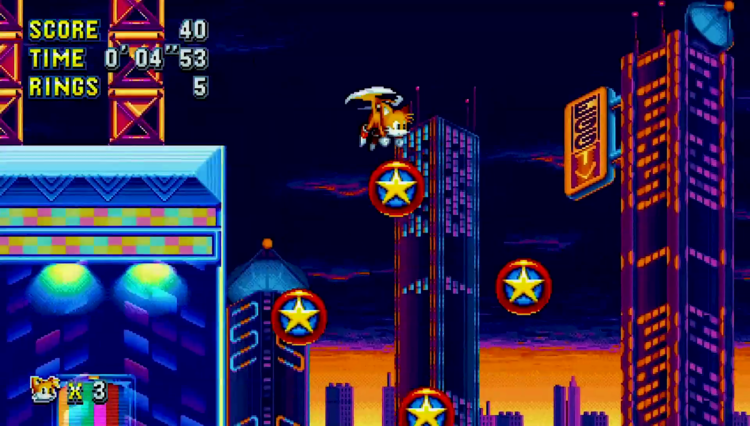 As you might have seen with recent video releases for the game, the older levels were met with a mix of old level layouts as well as newly inspired layouts featuring elements from other levels from previous games. Part of Green Hill Act 2 featured an entirely new layout. Unlike Act 1 which was shown off at the anniversary party last year which combined the first two acts of Sonic 1. The new section after Act 3 showcases more shallow, flooded sections, laced with spike beds and pulleys to zip-line you across based upon your speed. All of these new elements proved the be a little tricky and showcased the potential for what can be done to these levels. Looking at videos of Chemical Plant in action shown from other outlets coupled with the new content in Green Hill showed the potential that these old dogs can see some new tricks along with some familiar gimmicks and enemies paid homage in these updated levels. There were a couple of odd glitches such as the screen scrolling up and killing me after trying to leave from a secret room with a special stage ring and seeing a bed of spikes floating in the air when it turns out the screen is supposed to lock at a certain point to hide the visual oddity. The development team has already stated that those problems were already fixed. But we should keep in mind this is happening at E3 in which anything can go wrong, but the game’s not out yet. I’m certainly not worried. 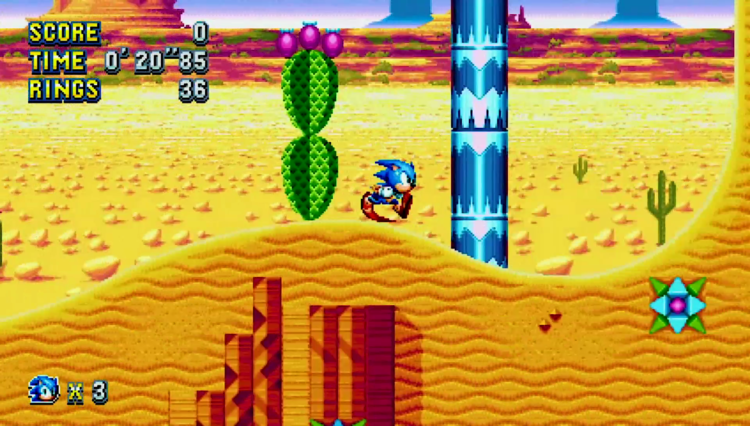 The Death Egg boss at the end starts an auto scrolling section that lurches as slowly as it’s able to walk after Eggman slams the lid down in frustration. Did I mention the game’s characters have incredible personality that’s entirely driven by their actions? The game has been reported to have storytelling similar to Sonic the Hedgehog 3 and I’d love to see how they tell the story through the game’s smooth animation. Back to the boss, the feet surprisingly cause no damage and attempting to hit it from behind pushes your character to it’s front. This does however launch you into the arms of the boss that is guaranteed to cause you damage. Fighting it “normally” doesn’t cause any strange problems, but in fact encourages you to take advantage of it’s new arms by climbing onto them after they’re shot out or by taking the high ground to cause damage. 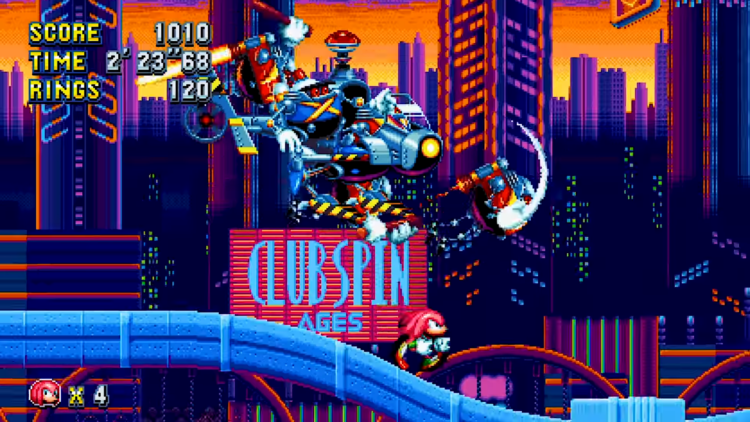 There were a few other changes that the game received since its first reveal but nothing too noteworthy to mention here. Overall SEGA is being careful not to spoil too much of the game until it’s release two months from now. I’m certainly excited to see what’s to come and I’m hoping to keep everything the game has to offer a secret until I actually get to play the full version in August. All versions of the game shown at E3 look identical, with the Switch version being demonstrated while the system is docked. But playing the game in tablet mode has me excited and really makes me hope that whatever two player mode is offered can be played with both Joycons on the go especially with that splitscreen feature that’s highlighted on the game’s Steam store page. This is a new classic Sonic that feels like a true return to form and it can’t come soon enough.

One response to “SEGAbits at E3 2017: Sonic Mania Hands-On Preview”