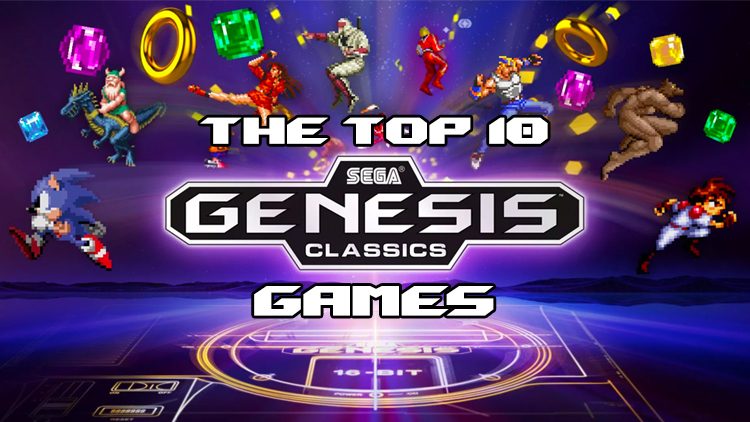 Phantasy Star made its debut on the Genesis/Mega Drive with the second game in the series, taking place 1,000 years after the first game. Players control Rolf and Nei in their attempt to take down Dark Falz. Those who completed the game surely remember it best for a heartbreaking death scene involving a hero character. *sniff*

Notably the first game by Sonic Team not to feature the blue blur himself, this game puts you in the role of a character named Ristar as he travels across different planets to stop Kaiser Greed’s reign. While Ristar himself is not blazing fast like his blue hedgehog cousin, he instead packs the ability to grab objects with his long arms and can either spin around, fling himself, or bash enemies with his face. It also sports top notch music and graphics. The game saw a port on the Game Gear.

This classic hack and slash was a must play both in arcades and at home, and starred some of the most uniquely named characters in the history of gaming. Nothing can beat a name like Ax Battler. Oh wait, kicking little elves for treasures beats anything. Worth noting: if you buy the physical version of SEGA Genesis Classics for for Playstation 4 or Xbox One, you get a two sided poster featuring Streets of Rage and Golden Axe art!

As is the case with most SEGA sequels, Shining Force II outshines its predecessor with a tactical RPG that was both larger and longer. Shining Force II is notable for being one of the most successful Mega Drive games in Japan. The UK Sonic the Comic featured Shining Force II stories, including one in which Max from the first game made an appearance. 2018 will mark the franchise’s return to the west with Shining Resonance Refrain for all major consoles, and in 2017 Camelot Software has stated they want to make a Shining Force IV.

The first game developed by Treasure, this game pushed the limits of what the SEGA Genesis/Mega Drive could do with intense run and gun action, utilizing a unique combination system to create different weapon types. It’s especially great with co-op! M2, of 3D Classics Collection fame, ported the game to Game Gear and later handled a 3DS port of the Genesis original in 2015.

The final game in the 2D Phantasy Star RPG series is debatably the best. With a story taking place 1,000 years after the second game, players investigate an outbreak of biomonsters and take on a cult leader named Zio. If you thought hunting down a complete in box Genesis release of the game is pricey, keep in mind that the game retailed for just under $100 upon its release.

The slickest and most refined Shinobi game on the Mega Drive is one of the best 16-bit action games ever created. Joe Musashi has never controlled so perfectly and this game features everything an early 1990s action game fan craved – including surfing ninjas! If you love the soundtrack, keep in mind that the Data Discs vinyl release will see a restock in the summer of 2018!

The game that started it all and gave SEGA a much needed boost at a time when the company was a bit directionless. While later Sonic games would improve the formula, the original still is a graphical powerhouse and solid platformer. Later versions added the spin dash, though purists prefer the added challenge of running, ducking and rolling.

SEGA’s console exclusive arcade style beat ‘em up series Streets of Rage was at its peak in this sequel to the popular original. Just about every aspect of the first game was improved, with a more diverse selection of character types and deeper fighting mechanics. Also, that first stage music is so damn good.

As one of the most acclaimed SEGA sequels and a follow-up to one of the company’s most important games, it is easy to see why Sonic the Hedgehog 2 took the top spot (on both this list and our Top 100 SEGA Games list!). Not only did the game improve on just about everything found in the original, but it became the template for what many fans would deem the perfect 2D Sonic experience. Are you up 2 it?