Out of nowhere a new Sonic game appears!

This new Sonic entitled ‘Sonic Colours’ is for the Wii and DS. It looks like it is aimed at a younger audience. Not much for me to say about it yet but Sega’s CGI looks fantastic as usual and the world looks colourful and interesting.

Hit the jump for a press release which will fill you in on all the details.

LONDON & SAN FRANCISCO (May 26th, 2010) SEGA ® Europe Ltd. & SEGA ® America, Inc. today announced Sonic ™ Colours, the new high-speed adventure of our famous hero Sonic the Hedgehog. Struggling with saving a colorful alien race fall into the clutches of Dr. Eggman, Sonic will face many obstacles along an inspired sci-fi themed amusement park. Sonic Colours will be available on Wii ™ and Nintendo DS ™ at the end of 2010.

A unique playground has been seen orbiting the planet of Sonic the Hedgehog. Some rumors speak of an alien race called wisps, with a rare colored energy, which is now imprisoned here, by the evil Dr. Eggman. Sonic, once arrived on the planet’s entertainment, you can use immediately made aware of this rare power to help colored wisps in the escape! The Wii version of Sonic Colours combines both 2D and 3D gaming perspective, while the Nintendo DS version takes advantage of the characteristics of the double-screen console.

“The lively alien universe of Sonic Colours allows players to race at breakneck speed along amazing planets, each with its peculiarities and unique visual style.” Comment on Gary Knight, Senior Vice President of Marketing SEGA. “In addition to classic Sonic gameplay, new power-wisps, they offer an innovative way to explore these new worlds and help Sonic to run faster than ever!”

The new Sonic hedgehog Colours see our dear speeding, jumping off himself among enemies like never before in a Sonic game. The aliens WISPs are able to free their “Colour Power” that can be absorbed by Sonic drilling to create new roads, for example, the ground (via the Yellow Drill), or go through the whole internship at supersonic speed (thanks to Cyan Laser). Combining the different available energies can further increase the speed of Sonic and his abilities beyond imagination. Lots of power ups and exclusive versions will be available for Wii and Nintendo DS for a brand new super-fast gameplay of Sonic for fans around the world.

Sonic Colours will be available on Wii ™ and Nintendo DS ™ at the end of 2010.

Also this, not sure what it is yet, 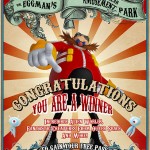