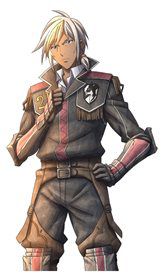 First we have Valerie on the left, she is known as No. 12. If you didn’t know, all Nameless Squad members are given numbers, thus the name of the squad being ‘Nameless’. She used to be a historian and was doing research about the truths of the Darcsen Calamity and tried to trespass historical ruins. Now she is in the Nameless squad.

On the right we have Felix, known as No.21. He has the over protective big brother attitude, you probably seen many anime characters like that. He has leadship abilities and a strong passion for justice. He used to be in a proper army but when he filed a complaint against a commanding officer he was shipped off to the Nameless squad.

Check out the source link for more stuff like information on special abilities and weapons.